Although centuries old, chess is still a very popular game today. Just a few decades ago, the only way to play it, was to get together with a real person face to face or, if you had all the time in the world, via mail (the slow one).

These days, technology has increased opportunities a lot. Artificial intelligence has evolved to the stage, where it can beat even the best players and can be programmed to play at various different skill levels. Many online sites offer direct player-to-player gameplay or email play.

I have always found the physical board to be better (than a flat computer screen) for analyzing the board and planning moves. Yes, you could replicate the moves manually, but what if the board could do for you automatically? Welcome, Square Off, (arguably) the best electronic chessboard. 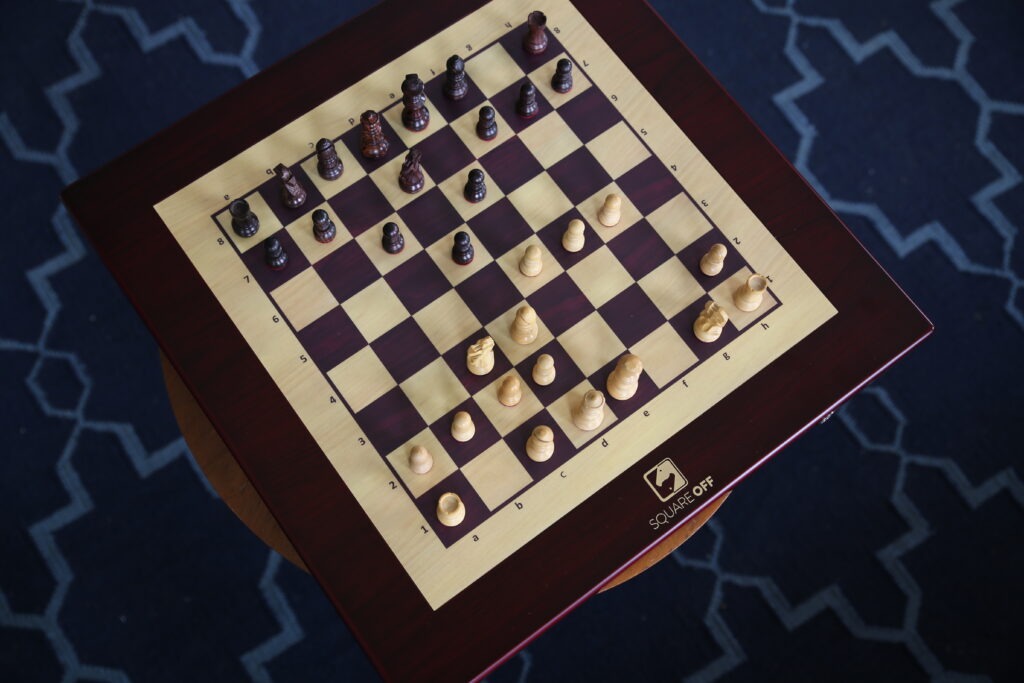 Development and Versions of Square Off

Square Off is a project created by two Indian inventors; Bhavya Gohil and Aatur Mehta. They hit Kickstarter in November 2016 and managed to raise over 170 thousand pounds in 24 days. Their initial pledged goal was 40 thousand, so by raising more than four times that, the project had a very bright future. 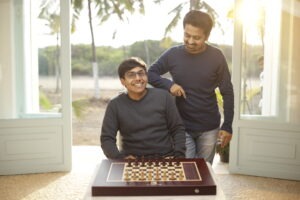 The enhanced edition offers extra features over the basic one: a longer-lasting battery, an option to stream matches to your board, designated parking space for taken pieces, and auto-reset. It is also slightly larger and heavier, and of course a bit more expensive. 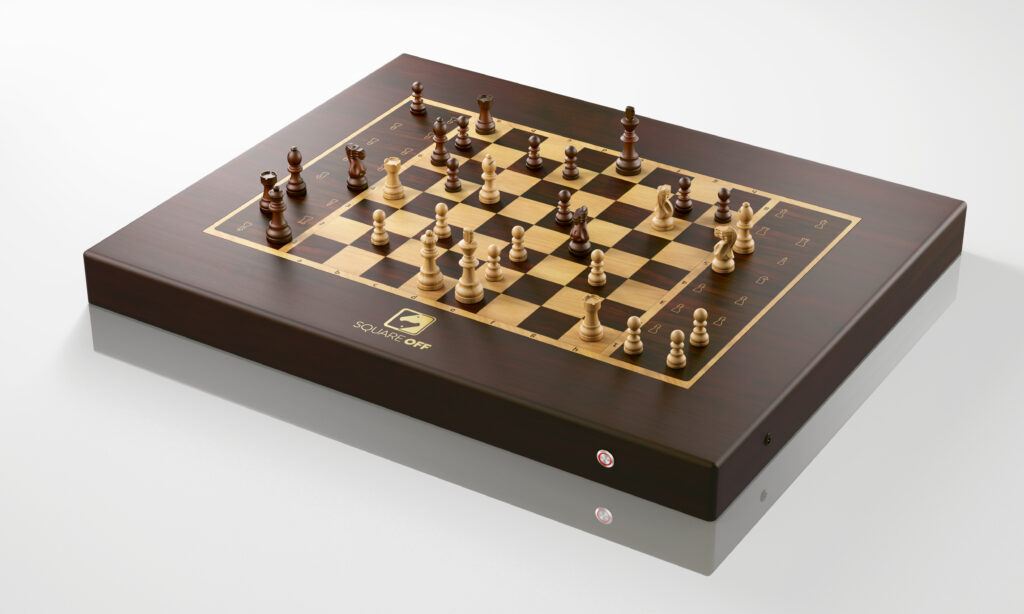 How does Square Off work?

When you first see the board in action, you will likely be impressed by the self-moving pieces. It almost feels like there is a ghost sitting across you and moving the pieces.

But underneath it, there is some impressive technology running the show. On the board directly below the pieces, there is a circuit board, that marks the positions of the pieces. Further below, in the box, a two-axis robotic arm moves the pieces with the help of an electromagnet attached to it. Add the battery and computer chips to run it, and that’s about it.

Besides the board, there are handcrafted pieces, which look really nice and detailed. There is also an extra queen for every color. Unfortunately, there is no designated storage room for pieces inside the board, so you have to store them separately, which is a bit inconvenient.

The board does not have to be plugged in during gameplay, but you have to (of course) plug it in when charging the battery. A nice touch is that there are three different adapters included (US, UK, and EU), so you are guaranteed to fit one of them.

The Board in Practice

Board itself does not have many buttons and switches. Besides the on/off button, there isn’t much else.

Square Off functions through a mobile app (available for both Android and iOS), where you can set up a game. There are options to play against the board AI (20 difficulty levels – maximum ELO is 3000), to stream matches, and to play online. 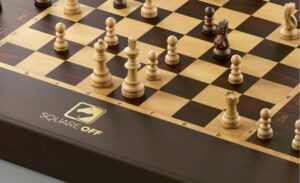 Online play is done through the Chess.com platform, one of the largest chess communities in the world. This connectivity ensures that you will never run out of people to play against and that you can find a suitable match in a matter of seconds. All expected features, such as board overview, move history, and chatbox are included in the app.

Now it’s the board’s turn and it’s time for magic to happen. Board moves the pieces in a very smooth and precise manner and just looking them go is very impressive. Although the robotic arm does not match the precision and speed of a human arm, it’s pretty quick and its moves do not hold up the game.

Pieces usually do not collide or tip over – the only time when there is a possibility for a problem is when pieces have to move through a narrow space between the other two pieces. This happens when moving the knights or castling. Sometimes there won’t be enough space (or if the pieces are not exactly in the middle of their squares) and the pieces will collide and, in the worst-case scenario, tip over.

You then have to manually rectify them. That rarely happens though, and it does not affect the gameplay. I don’t consider it a huge issue.

Another point that you have to take into account is, that the motors running the robotic arm are relatively loud. By relatively, I mean that chess is usually played in silence, and in silence you hear even the tiniest of sounds. It’s something you have to get used to it. 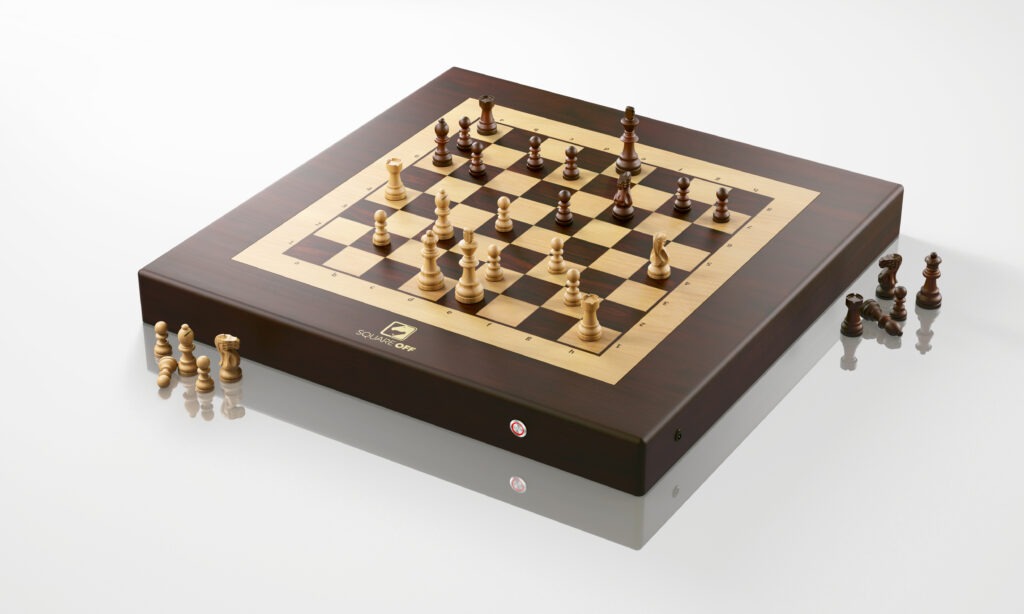 I Square Off the Best Electronic Chess Board?

I won’t get into a discussion if you really need an electronic automated chessboard. Only you know that, and if you are reading this, I assume you are seriously considering buying one.

For a technologically aware chess fan, Square Off is an excellent choice to work on your game and to impress your guests. It is also an excellent gift. I won’t lie, Square Off is not cheap. But neither are other electronic chess boards. I believe the price is spot-on, considering the time and effort that went into development and the quality of the product.

So, which one of the three models to choose? If you are seriously considering a purchase, I’d say avoid the Kingdom Set (basic model).

If you are in the market for these boards and have money for the basic model, let’s be honest, then you have money for the Grand Kingdom Set as well. Especially since it offers so much more for not that large of a price increase. (Auto-reset is really cool btw.) Or get the Limited Black Edition set, if you prefer the look of that one more.

Do you have any opinions or questions on Square Off? Let me know in the comments below.

11 thoughts on “Best Electronic Chess Board? – Square Off Review”