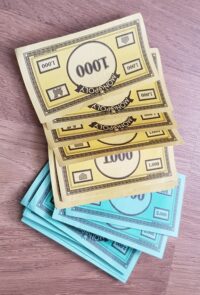 Aah, Monopoly. One of the oldest and most popular board games. It was first published in 1935 and after 84 years it’s still going strong. Before I get on with my pick for the best monopoly editions, let’s quickly go through the basics.

Although it involves a die and a very high luck factor, the true skills lay in money management and negotiation. Persuading players to trade properties with you, looking for the right price, and satisfying your inner salesman/tycoon is really what keeps this game on the top charts of popularity.

Game mechanics allow for very easy implementation of different themes, and there are a lot of different editions of Monopoly on the market.

In a case when the property is already owned by someone else, the visitor must pay rent to the owner. When a player owns all the properties of the same color (usually 3), he can start building houses and hotels on them, thus further increasing the rent that must be paid upon a visit.

The game is played until all but one go bankrupt. The remaining player is then declared a winner.

If you constantly get beaten by your friends and would like to get better at playing Monopoly, check out my guide for winning at Monopoly.

You can find more about the family of Monopoly games on BoardGameGeek.

The list wouldn’t be complete with the one, that started it all.

Baltic Avenue, Vermont Avenue, Atlantic Avenue, Park Place, and Boardwalk are some of the properties you will compete for with other players. Tokens are metal and feel really nice and heavy: a battleship, a car, a dog, a hat, etc.

Houses and hotels are unfortunately plastic not wooden (try looking for retroversion). Trading is done with good old cash, so a lot of manual calculations must be made and one of the players must second-role as a banker. 2-6 players can play.

Plastic replaces cash. The main feature of this edition is the centralized ultimate banking unit. It’s a computer that does all the transactions for you. Players each have their “credit card” instead of cash and with a combination of the unit and property cards money changes hands.

Some rules are slightly changed (no railroads, utilities, and hotels – you get the fifth level of housing instead) and the gameplay is much faster.

Money is replaced with coins (made from cardboard) and chance cards sit on the iron throne (which the winner receives and it also plays the theme song, which is supposed to create an atmosphere of trying to kill everyone?). Board has a very nice GoT style design with location pictures.

Another blockbuster license, but it’s not just a Star Wars theme on top of the standard monopoly. The game revolves around the conflict of rebels versus the empire and that 2 team competition is what makes this edition stand out.

Four tokens are available, two per each side (Luke Skywalker, Darth Vader, Kylo Ren, and Finn) and the goal is to have as many planet bases (players build planet bases instead of houses and hotels) on your side at the end of the game.

Popular monopoly game mechanics such as trade, rent, jail, and chance cards (“Force cards”) are still included, but players cannot go bankrupt, instead, they lose bases. The game is best played with teams of two, rebels against the empire. A maximum of 4 players are supported and that is also the only player number, I suggest playing this edition with.

Even though this edition plays pretty much the same as the classic version, I have included it because it is visually stunning. Properties are made of American national parks and historical sites (i.e Yellowstone, Death Valley, Big Bend, Yosemite; trails replace railroads) all portraited with high-quality pictures on the board.

Board provides a zen-like serene feeling – you almost feel like you’re sitting on a bench somewhere out in nature. Let’s also not forget the educational aspect – you never know when you’ll need to list all America’s famous sites (if you want to be a millionaire :)).

As said, gameplay-wise, the rules are exactly the same as with the classic edition, so no re-learning or adapting is needed – you just sit down and play as you are used to.

Which is the Best Monopoly Edition then?

There are many variants and editions available on top of those five. I didn’t want to include editions that change the rules too much (like Monopoly Fortnite) or repainted classic editions (I kept it down to National Parks) like Monopoly Avengers, Clone Wars, Ms.Monopoly, Hallmark Monopoly, Monopoly Dubai, and countless others that all play the same way, just with different property names.

For the sake of clarity, there are only five items on the list so that you can best find your favorite and you don’t lose yourself in the bunch of editions available on the online stores.