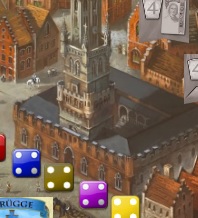 I’ve got to admit it took me a while to discover Stefan Feld’s games. Sure, the first-look appeal is not strong with them, but the more you play them, the more they grow on you. You discover carefully designed mechanisms that create tight and unforgiving gaming experiences.

But the real joy starts when you overcome that initial roughness and “get” the game. What initially seemed an insurmountable barrier (i.e. how on Earth am I going to complete all the canals/bonfires/city buildings), is now just a tool against the system and other players. This is the moment when his games truly open up.

Although I like his most successful game Castles of Burgundy very much, in my opinion, it’s not his finest exhibit. This honor goes to a less-known game called Bruges (initially released in 2013), a game of tableau-building and hand-management, spiced up with a bit of randomness from the card draw and dice rolls. Without further ado, here are 5 Reasons Why Bruges is the Best Stefan Feld Board Game.

Numerous modern board games don’t include direct player interaction as it can be very frustrating for the receiving party. Well, Bruges is not one of them.

Even without the take-that element, the game is highly competitive. Not only do you contend for overall points, but there are numerous mini-goals that you also compete for and that give out points, such as majority markers and canal statues. These are particularly powerful in a 2-player game, as owning one majority marker (and denying the ownership to the other player) can mean a massive 8-point difference. Such a difference is hard to make up for it, even more so if no expansion modules are used.

But that is child’s play compared to what certain underworld persons can do. Stealing money, discarding cards, houses, or persons are just some of the repertoire. Often, a card will have an effect on all other players. A thief will steal 3 coins from every other player. The more the merrier!

Then there are threat markers that you gain with dice rolls. Forget to keep them in check (there are several ways to get rid of them) and you may be forced to discard a built house/canal, lose all your money or workers, and so on. Incidentally, there are also ways to give your threats to other players.

With all that combined, it’s easy to see why Bruges is not for the faint of heart. But if you embrace the “nasty” elements, predict them and prepare for them, they are a powerful and exciting element of gameplay.

2. A Clear Path to Victory

Unlike Castled of Burgundy or Macao, the dice rolls are static for the whole round. This means it’s more straightforward what you should do to get points. If you want to put a person into a house, you need a worker to build a house, and then money to put the person in. You know exactly how many turns, workers, and money it will take. This makes planning the rounds much easier.

With that said, there are also various paths to victory. Focusing on canals, reputation, or person cards is pretty direct. The more advanced paths come from cards. Having a bonus on noble persons, underworld persons, or canals will naturally make you do that more. If you abuse a specific mechanism and the cards and dice fall right, you have the potential to score some big points.

Bruges plays excellently with both low and high player counts and it’s interesting to see how the gameplay changes accordingly. In a 2-player game, it’s all about getting those majority markers. Then, the more players you add, the more important are the persons that affect the whole table, i.e. smuggler, who gives every player a blue threat.

With the Bruges: The City on the Zwin expansion, several interesting modules are introduced. While I’m not the greatest fan of the pets module, boats and stock exchange are the real deal. They offer you to take extra actions, allowing some big turns, if you plan everything right. Of course, this greatly increases variance – but hey, you can only include what suits you. 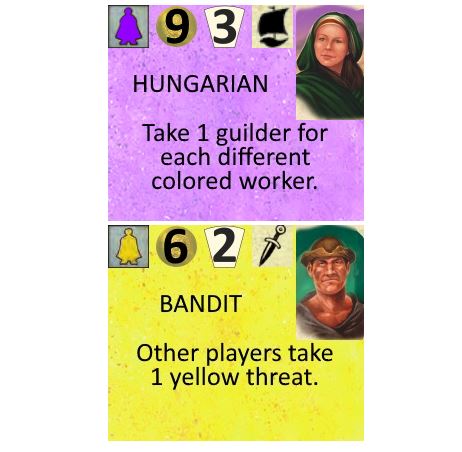 This brings us nicely to those ultra-satisfying big moves—an example. A saboteur allows you to draw a card from another player’s hand. A powerful move, even in a 2-player game. But not detrimental, since you can only play 4 cards per round and every round you start with 5 cards.

But imagine you use that same card in a five-player game and combine it with a stock-exchange ability, that allows you to use it twice immediately. Suddenly you own a majority of the cards, giving you a plethora of great choices, while at the same time leaving other players seriously handicapped.

Or just a simple canal + boat combo. Whenever you build a canal, you can use the fitting worker to use a special action on the appropriate boat. Plan everything right, and you’ll be getting free money, free canal builds, free activations, and cards – or even multiple of those rewards in the same turn!

As said in the previous point, you need the expansion to unlock the full potential of the combos, but the base game itself allows for plenty of flexibility.

The final reason is personal. Bruges is the best Stefan Feld board game I have played so far, but Mr. Feld has an extensive game list to his name.

Although I have played some of them, (Castles of Burgundy, Bruges, Macao, Bonfire, Carpe Diem) and scratched the surface of others (Forum Trajanum, Luna, Speicherstadt), I hope to play more and more of his games. I have high hopes for titles such as Bora Bora, Trajan, Notre Dame, and Kokopelli.

Unfortunately, many of his older titles are out of print and hard to find in stores, so having your eyes open for the second-hand market offerings is key. Bruges falls into this category as well, although a revised edition called Hamburg has been published through Kickstarter. There are ways to get it, but it won’t be cheap.

But there is an alternative, and it’s where I’ve played (and still regularly do) all my Bruges games. You can play it for free on yucata.de, an online board gaming platform. Several other Feld titles are available, as well as numerous other board games. If you join, let me know, and we can play a game together!