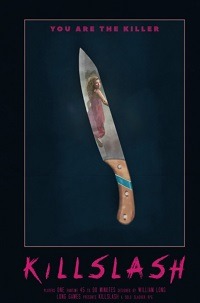 It’s finally here. The day I’ve been preparing myself the entire year. As I swoosh silently through the forest, the memory is still fresh.

As many years before, Getaway, a popular teen holiday resort in the countryside, was full of joyful youth. Among them was my nephew, little Tommy.

But, as is often the case with pesky teachers not paying enough attention and mean teenagers, the camp did not end well for Tommy. I still remember his screams and the branch that pierced his ribcage as he plummeted from the tree above. “By the Bloody Spike” soon became a nickname for the camp.

It was a gruesome scene and today I’m gonna get my revenge for my little nephew. The date is the 31st of October and the evening has just started. I have my chainsaw fully fueled and sharpened for the bones it’s about to meet. My target is Ms. Summerstone, the teacher in charge at the time of the accident. But I’ve long parted with all the moral restraints – everyone on my path will join her fate!

Slowly now, Zoltan! I hear voices in the distance. As I move closer, I see a young couple making out on a bench in the park. They look like a match made in heaven – a tall jock and a blonde cheerleader. Well, that’s not going to save them. I wait in the shadows for a while, biding my time. Cheryl and Jim are their names, I overhear them.

As Jim gets up and heads to the car to grab a pack of smokes, I sneak up to Cheryl from behind and start my chainsaw. She springs up immediately and turns around to face the danger. As I slash with my machine, she jumps and I just graze her on the arm. Dammit! (d1)

Just when I thought it was over, the blonde strikes me with her foot and her high heel ends in my spleen (d6). I surely didn’t need that, but I intend to retribute fully. My chainsaw that was always such a loyal friend, is still in my arms, revving. I make another attempt at Cheryl, who is still struggling to untangle her foot out of my intestines.

(d3) Luckily, my next move is much more successful. I help her remove her foot by severing it off just above the knee and leave her to bleed out. That’ll teach her!

I’m not a moment too early, as now Jim comes rushing back from the car with the wrench in his hand. He had a few moments where he could have taken a different course of action. Maybe call the police and drive away? But instead, he decided to rush me with his poor wrench. Oh well …

(d1) I really have to start working on my striking skills. As I point the chainsaw at his belly, all the football training he took really paid off. He just rolls aside harmlessly and heads to the car, escaping my class (d1). Lucky punk. But I’m not gonna bother with him for now, as there are bigger targets ahead.

My wound has slowed me down a bit (luckily I’ve managed to get rid of the leg), but Bloody Pike is in my sight now. I’m surprised to see another guy chilling under a tree, smoking a joint. Surely, he must have heard the screams and the chainsaw by now? Or is he just that high? I don’t care, to be frank.

I go straight at him and he just stares at me like I’m a phantom of some sort. I go for the right hand and the chainsaw makes little work of it. The hand falls to the ground (d3) with his joint still between the fingers. Drugs are bad, kids.

As a stroke of luck (d5), the lit smoke ignited the fuel residue on the chainsaw, causing burns to my right arm. As I’m putting the fire down, the stoner attempts to phone for help, but with a lack of fingers, he finds his touch-phone hard to operate and fails.

The fire is out and I come at him again. This time (d5) I leave nothing to chance. I make a horizontal slice, cutting the guy in half just above the waistline. I kinda liked the guy, so I venture forth, slightly disappointed at not even knowing his name.

Ms. Summerstone’s office is in sight now and she is in. Not alone, as I see. Our old friend Jim is with her, obviously explaining to her about the killing of Cheryl. I wait outside the office and just as he opens the door – surprise! (d6) His body still does a couple of steps, before collapsing. But his head is already on the ground by then. I kick it straight out of the window. Score!

That only leaves Ms. Summerstone. She is sitting behind the desk, holding a gun. “I couldn’t help him!” she yells as I run towards her. (d3) I have some practice by now and once again, I’m going for the hand, this time the one holding a gun, not a joint. Again, it comes straight off. I’m getting good at this!

She is now in complete shock. First, her gun didn’t go off because she forgot to arm it. Secondly, she just lost her gun together with the hand it was holding it. (d2) I decide to toy with her a bit and let her escape through the window.

And what a sight it was – a panicking woman jumping through a closed window and plummeting 15 feet down to the concrete floor. As I look through the window, I see her crawling on the floor, covered in blood and glass pieces. Time to end this, I guess.

I take the stairs down and I slowly approach her with my trusty chainsaw. (d1) She can’t take much more. I just lean the running chain to her throat which rapidly opens her vein. There I leave her, bleeding to death.

My journey is close to the end now. I feel a satisfaction in my heart, as well as emptiness. As the revenge quest is completed, my life has lost all meaning.

I head back to Ms. Summerstone’s office and pick up the unused gun. Soon I, Zoltan, will be reunited with my beloved nephew.

Killslash is a single-player journaling game where you are the killer in a slasher movie. As you hunt and attack four people you write about your experience and learn more about yourself and your victims.

During the game, you will choose your victims, answer questions about them, roll dice to attack them, and then roll dice to see how they react. You’ll then describe what happens in as much detail gory detail as you’d like.

Will you become the next slasher icon or will your victims outsmart you?

I’ve got to admit, this is the first time I’ve played a journaling game. If you’re unfamiliar with a niche genre, it’s a kind of game where you make up your own story.

The game loosely guides you through its phases and tells you what to do, but it’s you who come up with the narrative. Of course, it doesn’t have to be as long as mine – you’re not writing for a review every day.

There are certain points (when attacking a victim or when a victim counter attacks) in Killslash, where a die will resolve the encounter. I have marked such events in the narrative, together with my rolled number.

These moments are quite intense, as the fight can go either way and you have to adjust your narrative accordingly. In the worst-case scenario, you could die and not complete the game.

For this reason, I have chosen a large weapon, which gives you +1 to your attack rolls. I wanted to complete the game for review’s sake. But you could play with a smaller weapon, that gives no benefits or even gives a -1.

You also have to track hit points for yourself and your victims, but other than that there isn’t much of a game here.

But that doesn’t mean this wasn’t a fun experience. You can make way for your imagination and I enjoyed writing and coming up with plots. But I can’t see myself playing it again, but I received the PDF for free.

The game costs $10 and can be bought here. Is this a good investment for a 2-hour writing-assistant? The decision is yours.

Click here to read about 7 Best Horror board games

More into occult puzzle-solving: The Book of Rituals – Alchemical Review