This article, Oath Board Game Review is about the latest big entry from Leder Games. It promises a lot, intrigue, politics, and war. And your choices will impact the following games. Does it deliver?

Introduction to Oath Board Game Review

Welcome to an unnamed ancient fantasy realm, where inhabitants never enjoy political stability for long. No, as soon as one faction claims power, there are numerous others interested in taking the throne for themselves. Any similarities with a certain TV show are purely coincidental. 🙂

One of the players will play as a Chancellor, a current ruler of the realm. He has woven an Oath to keep a specific victory condition for 8 turns. Exiles, on the other hand, will look for an opportunity to snatch those conditions from him, fulfilling them and winning as a Usurper.

Or perhaps they will have a vision of one of the alternative victory conditions and fulfill those instead. If the Chancellor is weak enough to need help, they can join his side by becoming a Citizen, sharing the imperial troops, and winning by ruling better than the Chancellor.

Oath is a game of many possibilities. Some of it is opportunistic, card-driven, but a lot is down to the players. How they interact with each other diplomatically (and militarily) and how the theme sucks them in.

Oath doesn’t give you a background story or a narrative that would introduce you to the world. Instead, it gives you the tools to construct the theme yourself. Picturesque sites, that have their peculiarities, cards with thematic names that match their effects.

I.e. sunken town doesn’t allow you to build any more cards at it – because it’s sunk – but instead offers more relics – remnants of the lost civilization. Or the boiling lake, which makes every attacker lose troops upon arrival (because they … boil).

How will you use these tools is entirely up to the players. A group of passionate role-players will thoroughly enjoy all the possibilities and find stories in every move. Moreover, part of the game world remains for the next game, which creates a chronicle – players write the history of the empire through subsequent games.

The presentation definitely helps with the concept of narrative through player actions. Frankly, from the same guys that gave us Root, we expected nothing less than spectacular – and they duly delivered.

From over 200 hundred cards, not two share the same illustration. The style is consistent across the board and unique to Kyle Ferrin. I’ll leave the rest of the praise to the images. Let’s just add that the components are of very good quality, as well.

While they’re mostly cardboard (as far as the retail version is concerned; the Kickstarter had premium components), the standout component is the neoprene central board, which is a joy to play on. Not that it really matters for the gameplay, but it’s pleasant. The custom-shaped screen-printed wooden meeples are back, and there are a lot of them.

Another likable touch is that they also thought of the insert. Although fairly rudimentary, it gets the job done and is miles above merely giving players plastic bags. It also helps to store the game world state from game to game, making the setup as easy as possible.

Of course, all this premium quality comes with a premium price. Oath is not a cheap game, but more on that later.

There’s another price to be paid for entrance into the world of Oath – the steep learning curve. Although the foundations are simple – it’s an action point board game, things get complicated quickly.

Each round, you will get a certain amount of action points (they are called supply) which you spend for actions:

Every action is affected by multiple variables. The cards themselves, the star of the game, have many instant effects and ongoing abilities that you have to take into account. Then there are site peculiarities, which can add or reduce your movement points, costs of searching, modify dice for campaigning, etc.

Even trading is not straightforward. Not only must there be an available denizen (=played card) at your site, it often needs to be the same suit as one of your advisors. This is also a prerequisite for some Recover actions.

Many rules such as Campaign are unintuitive and hard to wrap your head around. Moreover, the rulebook is crumbled all over the place. You’ve got the tutorial, you’ve got the card-aided setup, you’ve got your rulebook, and you’ve got a couple of reference pages.

There’s a lot of unclarity between them and it takes time before you even know where to look for an answer, let alone internalize the rules. It doesn’t help that the game uses a weird vocabulary for game terms, which will just further confuse players.

As mentioned, a tutorial is included, which is fine if you have a group of four – but don’t expect that you’ll know what you’re doing by playing it. Even the rulebook says, that making rules-related mistakes is expected. I don’t know how you feel about that, but I’m certainly not comfortable with it.

This results in a steep learning curve, which will thin out the potential players quickly. You’ll need to devote time for learning ( it took me several plays and youtube videos) and it will take 2-3 games before you’ll approximately know what you’re doing, let alone be able to develop some sort of strategy.

Oath is a game for large groups, ideally 3-5. Although you can play it with less, the player-vs-player dynamics don’t come through fully. Moreover, the automa that you’re supposed to use in 1 and 2 player games is exceptionally fiddly and requires you to go through another more learning process.

The flowchart it uses is cleverly designed, but it’s demanding to use at first. Again, I had to resort to youtube to get a feel for it. To make matters worse, there are numerous exceptions and if->then sentences included with running it.

Higher player counts are can also be problematic because single turns can take some time to complete, meaning there can be a substantial downtime before it’s your turn again. This is particularly true if the players are still inexperienced.

With experienced players, the downtime is less, so I only suggest playing with larger player counts if everyone knows what they’re doing. It’s also important that the group is immersed and invested so you’ve got something to do in the meanwhile (negotiate with others, role-play, do politics, trash talk, etc.).

In any case, Oath is not a short game and you can easily devote 2-3 hours to a single game.

While Oath is a competitive game, you shouldn’t perceive it as such. Oath is about the ridiculous combos that cards produce and about the kingmaking and narrative that comes with that.

For example, if you combine Fire talkers with the Darkest secret, you get +-3 on attack dice, which makes you pretty much unbeatable in any combat. Dragonskin Drum gives you one warband each time you move, so you can just move around the map and your army will increase.

And that’s only one example. With over 200 cards, such game-breaking (in a positive way) combos are everywhere. That’s why the Search action is so important. Not only can you draw visions for an alternative victory, but you also need to build combos that will make you reach your game goals more easily.

Since there are several restrictions on card placing (sites, suits, matching advisors) it can take time before you find something useful. On the other hand, you can find your winning combo with the first card. The influence of luck is present here, but that’s not a negative, because it fits thematically so well.

And that’s because Oath is about stories, about the chronicle of the empire. How the chancellor lost his site supremacy on the last turn, and then the usurper became the new chancellor in the next game, trying to retain the newly acquired sites with the help of a Rampart that he took from the former chancellor.

And failed, because he was just focused on his military, and couldn’t stop an exile from getting the people to follow him and fulfilling a Vision of Rebellion.

History is Written by Victors

After each game, the winner’s sites remain on the board and he chooses which suites of cards will be added to the deck and some of the old ones removed.

This slowly changes the world to the group’s tendencies and they will take it for their own, care for it much more and feel involved in it. They will be excited about new cards arriving and nostalgic about some of the old ones gone.

The true impact of the chronicle element only shows after several plays, which is one more indicator that Oath is made for regular groups that often play the same game. Only that will you get the best out of it.

But that doesn’t mean you can’t swap players in and out. You can freely do that from game to game, even change player numbers or play a solo game and the world will keep evolving. Or if you feel that you’ve gone too far and want to start anew, you can reset the state to default at any time.

To conclude, I really liked the system. The added legacy/chronicle element helps with immersion and the sense of world-building. It takes the best of skirmish (ability to come and go) and legacy plays (involvement, narrative) to allow players to create a world of their own. I’d love to see this concept in more games in the future. 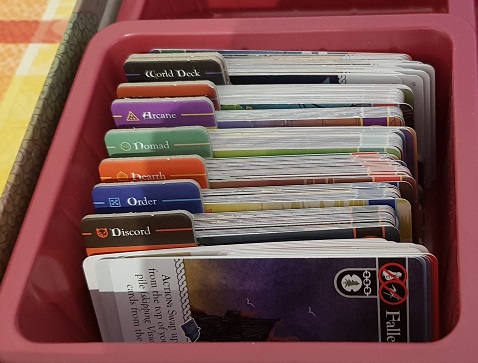 Who is Oath for?

Oath is an exceptionally good game, but it’s not for everyone. If you’re a solo board gamer or play with a maximum of one other person, I don’t recommend it. The entry price and the learning process are way too steep for what you get. Sure, it can be fun, but at this player count, you’re mainly playing the mechanical side of Oath. And mechanically, there are many better options out there.

You want to play Oath for the thematic experience and player interaction. Now, if you have a regular gaming group, that’s something else. If each player is willing to invest time (and money) into it, this might easily become your greatest-of-all-time board game.

If you have a ready group for Oath, you’re in for one of the best political board gaming experiences out there.

Oath: Chronicles of Empire and Exile