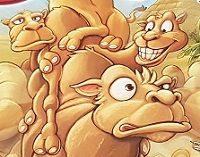 What is a gateway board game?

Gateway board game is a game that is simple enough for new players to understand and introduce them to the hobby. It must be accessible, with a family-friendly theme, and include the basic board game mechanics.

Why do you need a gateway board game?

One of the proverbs I once heard goes something like every start is difficult. It’s the same things in hobbies, and in our case – board games.

It’s true that everyone is familiar with mainstream board games, such as pachisi or monopoly. But those don’t really qualify as modern board games and you can’t expect anyone coming from them to be able to play a complex board right away.

So you need something in the middle. Board games that are simple enough for new players to understand and introduce them into the hobby – gateway board games.

Who are gateway board games for?

Characteristics of a gateway board game

Examples of Gateway Board Games

Everyone is familiar with the concept of laying dominoes, thus the idea of laying them around your castle will be natural. Selecting the next tile will introduce the players to the concept of variable turn order.

On top of that, the scoring rules are simple (connected tiles X crowns on them), allowing players to quickly understand the winning strategy. The art is very colorful, with wooden meeples, and the price is quite affordable.

Read more about Kingdomino and Quuendomino

What I like most about Sushi Go!, is that there are no illegal moves. On your turn, you need to take one card and pass the hand onwards. That means even the kids aged 5 can play this without problems. They might not win, but won’t be a burden either.

The game is about collecting various dishes which score points at certain combinations. I.e. you need pairs of Tempura, triplets of Sashimi, Nigiri scores more when combined with Wasabi card, and so on. Card drafting and set collection at its most primal form. And it will make you visit a Japanese restaurant! 🙂

If we take the already familiar card drafting and set collecting and expand a bit on it, adding a map and network building mechanics, then we get Ticket to Ride. Who doesn’t love trains?

Many editions are available with different maps: the original USA map, Europe, Nordic Countries, New York, London, you name it. A simplified version (not that the original is overly complicated) for pre-school children is also available as Ticket to Ride: First Journey.

The 2004 game is considered a modern classic, although I’d argue that its appeal is starting to dwindle a bit, especially since many games have surpassed it, both thematically and mechanically.

But it’s still the tile placement exemplar. Draw a tile, place it on board so that it matches adjacent tiles, and optionally, place a meeple on it. The meeples are there to score terrain features (roads, cities, monasteries) and are relatively easy to understand – except the farmer meeple, which I would recommend you leave out for the first couple of games.

The original theme feels a bit bleak, so I recommend you pick up a couple of expansions to keep the game fresh.

You chuck dice and the camels race around the pyramid! If that’s not a wacky theme then I’ve yet to see one. But this is not another Snakes and Ladders. You’re not playing as one of the camels, but rather as a wealthy bystander, betting on the outcome.

The over-the-top theme and ridiculous camels that can ride on top of others guarantee a good time that gamers of all levels can enjoy. Even if you’re not good at calculating odds and risk vs. reward, you’ll find yourself cheering for camels every time a die is rolled.

Cooperative games are particularly well suited for teaching new games, as they allow you to win or lose together, to be a team. That guarantees the feeling of being welcomed and appreciated.

While games like Forbidden Island or Pandemic feature similar action points mechanics and are also not bad choices, I particularly prefer Zombie Kidz Evolution. The theme is comical and colorful, the characters each come with a special ability, introducing the variable player powers concept.

The game mechanics are so simple they only take a minute to teach and as you play more games, you are awarded with stickers and get to unlock new stuff, that enhances the gameplay. An overall excellent package and arguably the best board game for pre-school children.

If we go back to tile placement, Azul is another prime example. The rules are as easy as taking tiles and placing them on your board, where they are scored, depending on the pattern created.

Azul is a great entry to abstract board games and placing the tiles is surprisingly satisfying. But while it’s easy to learn, it is deceivingly hard to master and can get very competitive. It also helps that it looks great on the table.

Read more about Azul in our Best abstract board games article

Girls love princesses and other royalty, every one of us that has a daughter knows this. And she really loves this one.

Love Letter is a simple card game (you only have a maximum of two cards in your hand), where you try to guess what other players are holding and eliminate them on those grounds.

It’s just the right amount of complicated that’s there’s a level of strategy involved, while still being easy and fast to play. A great choice for a quick and fun affair.

Placing various polyomino-shaped blocks on your personal board with the goal of filling it sounds simple and it is. But this wouldn’t be an Uwe Rosenberg title if it didn’t include a very tight economy behind it.

Sure, anyone can pick it up and play it casually. It will be enjoyable. But the more you play, the more you’ll see how carefully you have to manage your buttons and time to get the shapes you need and deny them to the other player.

This is a two-player-only title, and it needs two evenly matched players to get the most out of it.

Santorini, a picturesque Greek island is a dream holiday destination for many. But not everyone can fulfill their travel dreams, so a board game with iconic blue roofs will have to suffice.

But hiding behind a cool facade is a very tight abstract game of cat and mouse. The game is played on a 5×5 grid, where your builder can move freely and construct buildings. The idea is to place your builder on top of a level three building.

This won’t be an easy task. There’s more than one builder trying to do the same, blocking buildings with domes and restricting your movement. One of the best easy-to-learn, hard-to-master examples.

Read more about Santorini in our Best abstract board games article