If you’re considering getting a board game for your pre-school child, today’s Ticket to Ride: First Journey (Europe) – Review should interest you. What can kids learn from it and what ages is it suitable for?

Kids and trains go together like peanut butter and jelly. It’s something majestic about the metal beasts that makes them so attractive – even to adults, admittedly. Of course, the theme is quite popular in board gaming as well, albeit mostly in slightly heavier, economy games.

But there’s room for lighthearted fun as well, and that’s where Ticket to Ride steps in. It’s an ideal family game, and it quickly gained popularity, becoming a modern-day Monopoly, if I may make such a comparison.

Even though Ticket to Ride is not a complicated game in itself, Days Of Wonder decided to bring its gameplay to an even younger article. First Journey is suited for pre-school children. Since we have a 5 yo daughter, it looked like a perfect gift for her. 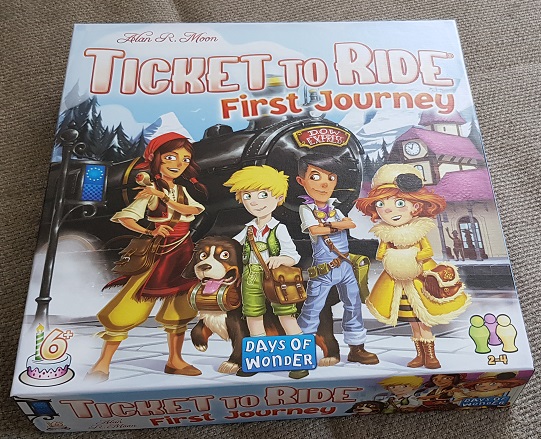 The Theme, Victory Conditions, and Components of First Journey

Ticket to Ride is one of the more basic set-collection board games. You draw cards from a deck and when you have enough of the cards of the same color, you can claim a route of a certain color by discarding the cards and placing your train tokens on the map.

During the game, you will receive several goals (connect city A with city B). The first player to complete six such goals wins. Alternatively, the game ends if one of the players runs out of train pieces.

When you open the box, you’re greeted with a big, stylized, and simplified map of Europe (the US edition is available too). Major cities are pictured with illustrations of famous landmarks (you-know-what for Pariz, Big Ben for London, St. Basil’s cathedral for Moscow, Brandenburg Gate for Berlin, etc.) or other cultural symbols so that kids can easily tell them apart, even if they can’t yet read.

The symbols are replicated on the goal cards, together with a map outline. Our 5 yo had no problems identifying what routes she should work towards. The cards with trains are pretty standard – there are six basic colors (suits) and a joker suit.

The trains themselves are large plastic pieces and they come in four colors. There are also some spare pieces added, which is a nice bonus. We all know how kids are at taking care of components. It’s nice to know you’ll be able to play without any problems if one of the pieces goes missing.

How To Choose The Best Board Game For A Preschooler?

How to Play Ticket to Ride: First Journey

As already mentioned, Ticket to Ride is one of the easiest board games to learn. This is even more true for First Journey.

Before the game, each player receives a hand of four cards and two goal cards. On your turn you can do one of two things:

That’s all you need to know to start. There are just a few extra rules:

The game runs until one of the players accumulates 6 goals or runs out of train tokens.

Ticket to Ride First Journey is an excellent boar game introduction to pre-school kids aged 3-6.  3 and 4-year-olds can play with some assistance, while older kids can be quite competitive on their own. I’ve actually lost against my daughter. 🙂

There’s a decent element of tactics involved, planning your routes. Often you must take a sub-optimal route because that’s just how you drew the cards. That said, there’s an element of luck involved regarding the card draw.

The original Ticket to Ride mitigated this by having cards you could pick from face-up on the table, giving you additional options. In First Journey, you just draw the top two from the face-down deck and what you get is what you’re stuck with.

Contrary to its big brother, you can’t score any points for your routes, it’s just about completing them. Unlike the original where it was also about long trains and the longest route, now it’s about the shortest route. It’s about completing a route while spending the fewer trains possible.

While there’s a reward for completing an East-West connection, these simplifications really tone the game down. That’s why I said I wouldn’t recommend this to kids older than 7. As soon they learn basic reading and counting, they should switch to Ticket to Ride proper, which offers a lot more tactical freedom.

If you’re a parent that plays with kids, I’d even make an argument of going directly to the big game, as you can simplify the rules yourself, while also keeping a bit of challenge to you. Because, for any adult remotely familiar with board games, First Journey will just be too shallow and thus boring to play.

Ticket to Ride: First Journey is an excellent board game for young kids. They’ll understand it immediately, the theme and looks are appealing, and they will find the concept fun and challenging.

The game is simple enough that a group of 6-year-olds can enjoy this without any assistance from adults.

For older or more experienced, the game offers too little value to justify playing it over the original Ticket to Ride. But then again, isn’t spending valuable time with your kids justifiable enough?

More games you can play with kids of similar age (4-6): 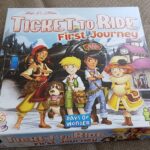