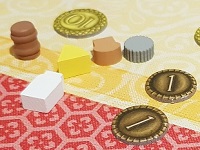 Have you ever wondered Why am I so Bad at Board Games? Read this article to learn 5 reasons why that may be true and how you can improve.

Why am I so Bad at Board Games?

There can be many reasons why you are bad at board games. Maybe the mechanics are not natural to your way of thinking, maybe you are not competitive enough. Or maybe you just haven’t learned the rules properly and played the game enough times.

Not being good at what the game demands

Let’s face it – not all of us are equally good at doing different things. The analytically-minded person will thrive at complex strategy games and will be able to make logical connections between its game mechanics naturally. Big, complex games of open-information like Gaia Project, Clans of Caledonia, Mage Knight, or even chess, for that matter will be a natural sandbox for such players.

But don’t despair if you’re not into games like that. Frankly, not many people are and it’s kind of a niche within a niche. Maybe something less complex, something you can wrap your head around more easily, but something that still offers a decent amount of strategy, will be better suited to you. Games like Santorini, Clank!, or Quacks of Quedlinburg come to mind.

Still no good for you? Then you can do a full 180 and try the party games. Games that require little mathematical thinking, but rather cherish social deduction, risk-taking, and a bit of gut feeling. Perhaps you have an eye for detail and are a detective deep down. Or maybe you just want to have some fun role-playing.

Not enough time to practice

We’ve heard the saying “Practice makes perfect” a million times. But there’s a catch. It only works IF you put in the practice time. No one else can do it for you and you can’t substitute playing time with watching videos or reading tutorials.

There’s also good practice and bad practice. A good practice is thinking about what you’re doing, why you’re doing it, what others are doing, learning from your mistakes, trying different things, and keeping an open mind for new ideas. That includes not being afraid to search for guides and guidance (on and offline) and apply your own critical thinking to it.

On the other hand, bad practice is you playing the game the same (bad) way every time, with the only effort you put in is the variety of excuses for your losses.

Not willing to learn the rules properly

In order to make the best out of your playing time, you must first understand how a game works. I’ve seen numerous examples of players who were quite decent at a game, but have never even glanced through the rulebook. Sure, if you have a good first-time teacher that’s possible.

But how are you going to ever beat that teacher? You can’t – because they have read the rules more than once to understand how things work. Well, they had to, how would they teach you the game otherwise?

In our group (which usually consists of just me and my partner, with other players occasionally joining), I’m the guy who introduces new games, learns them, and teaches them to others. I’ll read and re-read the rules several times, trying out the game for myself, just to see the mechanics in action.

It’s rare that my partner should beat me at a game like 7 Wonders: Duel, something really unordinary should happen for her to win. It was I who bought the game, learned the rules, and introduced it to her. While I’d like more competition, I’m also grateful that she’s willing to play and enjoy it in the first place.

This is the one I often encounter with casual players that are just trying to have fun, without stepping onto anyone’s tail. But to get that last ounce of edge out, you’ve got to be ruthless, you’ve got to push others out of the way and be ready to pull the trigger, if necessary.

I’m talking figuratively, of course, not promoting violence or anything similar. Just the stuff the rules allow. I know a lot of people are not built that way and prefer an easygoing approach. But super-competitive people will know what I’m talking about. Here are a few examples.

Scrabble was one of our go-to games when I and my girlfriend started dating. As she is a language teacher, it would make sense that she would have an obvious advantage. And she did, especially in the vocabulary area. Her words were always long, nice, and made sense.

But it was me who won most of the games. Although my vocabulary is decent, I gained the advantage elsewhere. I did not care if the word was nice or not, the only thing it mattered was the number of points it hauled. If the word was lucrative, I would even place words I wasn’t sure were even legal, risking a challenge.

Keeping the board tight was another winning strategy I employed. I would rather place a sub-optimal word so that I could keep her away from double or triple points squares. On the other hand, when such a square was available to me, I made every effort to immediately seize it, preferably with a rare letter.

A similar thing can happen in Carcassonne, a tile-laying game. Often, the players will just focus on building a nice large city, forgetting that the goal of the game is to score points and also prevent others from scoring. Neat-looking cities are just a byproduct.

I’ve seen cases of players being overly passive all the time in poker. They are called fish there because they’re so easy to win money from as is fishing from a full pond. The natural behavior of people is being passive. They prefer to observe, see what happens, and only then react.

But to become a winner, you must take the initiative, become aggressive and start putting other players into inconvenient positions. Luckily, such behavior can be learned through self-discipline and a lot of practice.

Having a good time is victory in itself

By reading the previous paragraph, you might now think that’s the only way, but it couldn’t be more wrong. Yes, if you played poker for a living, the aggressive approach is absolutely the only way to go.

But we don’t play board games for a living or for money. We play them to have a good time, either with ourselves or with the people we like to hang out with.

And that’s the point of board games. It’s not about winning, it’s about spending quality time.