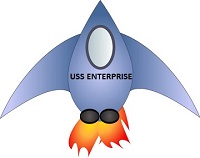 Combining an appealing intellectual property with good gameplay mechanics can be highly enjoyable for fans of that show. Today we look at the 10 Best Star Trek Board Games in 2022.

Introduction to 10 Best Star Trek Board Games in 2022

Space … the final frontier. To boldly go where no man has gone before … Beam me up, Scotty! … Engage!

Star Trek is one of the strongest and most well-known sci-fi franchises. What started as a series back in the sixties, evolved into a universe of several movies, series, cartoons, video games – and board games.

Since Victory Condition is predominantly a board gaming site, we’re gonna take a look at 10 Best Start Trek Board Games in 2022.

Yes, you read the title right – it’s a wordplay on conflict and flicking. Two conflicting sides – the Federation and the Klingons are fighting for planets in the Neutral Zone.

You probably guessed how the fighting and resource-collecting part is performed. You are flicking discs, which represent space ships across the map to either knock other ships out of the way or end movement in range of a planet to claim a resource.

Both actions earn command points which is how you win the game, but there are features such as asteroids (to block shots) and the ability to add more ships to your fleet to increase the depth and longevity of the otherwise short and light-hearted game. Unfortunately, the game is no longer available, so watch the second-hand market closely if you’re interested.

Time travel and alternate realities are a repeating theme in Star Trek, thus making this version of Chrononauts highly relevant.

You play as one of the known characters, traveling through various events in the Star Trek timeline. This timeline is represented by a tableau of 36 cards and you can alter it to suit your goals.

Completing a goal is how you win the game. These range from retrieving artifacts to even ensuring important political events, such as the founding of the federation.

With all the events included, this game is a paradise for trekkers, while relatively simple card-playing mechanics assure everyone can get in the action.

A series of three stand-alone games using the same game mechanics allows you to transfer characters from one game to another and try out what-if scenarios.

Each title comes with two or three game modes, letting you explore, complete missions, and overcome events. The goal of each scenario varies – one might demand that you play cooperatively against the Borg or fight a deadly disease, while another may allow you to freely venture through space.

As expected, the game is highly thematic and immersive. While deck-building is nothing revolutionary, it gets the job done.

Fluxx is an interesting light card game, in which you draw one card per turn and play one. These are all of the basic rules. Things get complicated the more cards come out, as these not only change victory conditions but also the rules that are currently active.

How to draw and how to play cards can both change and this constant flow or flux is what gave the game its name.

Star Trek Panic is a re-implementation of Castle Panic, a popular cooperative tower defense, only this time you’re defending the USS Enterprise (from the original series) from enemy attacks.

In Panic, you won’t be working on your own. You plan your defense together, trade cards, complete missions, and defend yourself from various threats. These can range from cloaking ships, to Romulans, Kinlingos, starbases, and others.

This list wouldn’t be complete without a tactical combat game with miniatures. Attack Wing uses proven mechanics used in Star Wars: X-Wing Miniatures Game – but is unfortunately not compatible with it.

The miniatures come pre-painted (as you can imagine, there are countless ships you can buy) and the mechanics are a clever mix of maneuvering and out-maneuvering. You decide on your movement in secrecy, which adds a deep, chess-like dimension.

Ships have different properties and special abilities. You can upgrade and customize them, as well as equip famous crew members.

The rules are relatively straightforward, making this a perfect beginner-friendly miniature board game.

You probably spotted a trend of copy-pasting a Star Trek theme over a proven game system, and our next entrant is no different. It uses the most influential modern board game as its base.

Catan doesn’t need a lot of introduction. You settle on an uninhabited island and exploit it for resources, which you use to further expand. The harvest is decided by dice, while the building part is a simple set collection.

Star Trek: Catan is pretty much the same, only repainted. Now you have Planets, Outposts, and Starbases. No sheep and clay are found in space; you now use dilithium, titanium, food, oxygen, and water.

The game differs only in one aspect: a set of support cards that allows players to use special abilities and are portrayed as Kirk, Spock, McCoy, Sulu, Scott, Uhura, Chekov, Chapel, Rand, or Sarek.

Star Trek: Frontiers is another game that has its roots elsewhere but this one is much more ambitious. It uses no other than the king of complex solo board games, Mage Knight!

The theme is properly adapted for the Star Trek universe. You command a spaceship, freely exploring a space quadrant. You can recruit crew members and progress in experience and skill, while enemies and other dangers also have a Star Trek feel. Capturing a city, for instance, is substituted with defeating a Borg cube.

One notable gameplay difference is that there is no night and day transition, but otherwise, the flow is pretty much the same. A brilliant mixture of card-driven action point system, deck building, a great sense of freedom, exploration, and progress, with challenging puzzles on the way to your scenario goals.

As its father, the game is simply brilliant. It has a very high entry bar, so it’s not for everyone. But if you’re looking for a heavy solo sci-fi game, it doesn’t get much better than Star Trek: Frontiers.

When it comes to thematic immersion, few games on this list can match Fleet Captains. This is a whole season of Star Trek in one sitting. Build fleets, equip crew, go explore, enter combat or diplomatic events, and so on.

The game is played on a hexagonal space map of various features. Each player builds a fleet (24 terrific miniatures of iconic warships included) and then they set out to do basically whatever they want. The game is played to 10 victory points and you can earn those points by completing missions alone. Combat is not necessary, although it is also a viable path to victory.

The base game comes with two factions (Federation and Klingons) with several custom decks of cards, ensuring high variability. Moreover, two expansions are available, introducing the Romulans, and the joined forces of the Cardassians, the Breen, and the JemHadar led by the Vorta and the Founders.

The game mechanics are heavily intertwined with the theme, making the gameplay smooth and intuitive while licensed ships, crew, and events (recognizable from TV episodes) will provide a flowing story arc.

Star Trek: Fleet Captains is a perfect game for a couple of Trekkies – you’ll feel as if you’re in a TV episode, only this time you are in command of what happens.

But what if you’re not here just for an adventure, but have much larger ambitions? Here’s where Star Trek: Ascendancy enters the room. This is a civilization building board game (4X) of galactic exploration and conquest.

Three players can play this game, each playing as the United Federation of Planets, the Klingon Empire, or the Romulan Star Empire. The factions are highly asymmetric and credible. Klingons love war, the Federation likes to spread its culture, etc. (Several expansions are available, increasing the pool of civilizations and the option to play with more players.)

Exploration is one of the best features of Ascendancy. The board is modular and you build it during the game, never knowing what you’ll discover or how the planetary map and space lanes will pan out.

Managing your empire is also important. You can research new technologies, build starbases and fleets, and handle your resources. Space combat and planet invasions are resolved by dice, but your technologies can considerably increase your odds.

The game can be won culturally (Ascendancy tokens) or by conquest. Although there’s a lot going on in and it can last a long time, Ascendancy is not difficult to play.  It can, however, provide an epic portrayal of galactic exploration, trade, diplomacy, and war.