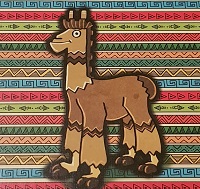 This is a review of Altiplano, a bag-building board game set in the Andean high plateau, where you convert resources into more valuable resources, scoring points for them.

Introduction to Altiplano Board Game Review

I never intended to buy Altiplano, but it was a weird situation of having been sent a Folded Space insert for it by accident, that nudged me to pull the trigger. It helped that both the base game and the Traveler expansion were discounted at a local online store.

When it comes to bag-building (you pull tokens that you carefully selected randomly out of a bag), Orleans from 2014 is a popular go-to destination. But Mr. Stockhasuen wasn’t completely happy with the design and created Altiplano, a very similar game, mechanics-wise, but (arguably) improved and with a much more exciting theme. Let’s check out if it succeeds. 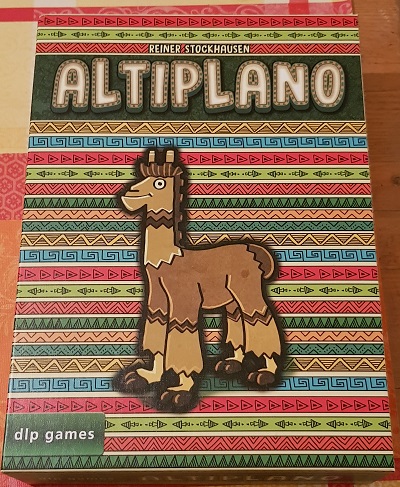 The theme of Altiplano is, for the lack of a better word, “weird”. It’s set in the Andean high plateau around Lake Titicaca, where the inhabitants fish, mine, breed alpacas, and trade goods. The weird part is that it isn’t specified at what time in history the game takes place. It definitely appears to be pre-industrial, but it doesn’t seem to go back all the way to the time of the Incas.

But regardless of that, the theme still manages to come alive, thanks to the wonderful artwork from Klemens Franz. The color palette used is very natural (green, brown, yellow, blue, red) and lively, making the game a joy to behold on the table. Player boards, warehouses, and action boards are both aesthetically pleasing and functional, with easy-to-recognize iconography. Finally, there is the colossal cardboard alpaca as the first player marker, which is just ridiculous (in a positive way, in my opinion).

Talking materials, this is an old-school eurogame. Cardboard, some more cardboard, wooden cubes, and meeples. Exactly what I love. The rulebook is not the best around. I had trouble understanding a few things, things that later proved not to be complicated at all. I guess a bit of the flow got lost in the translation from German.

The game requires a bit of time to set up. You need to count out the needed amount of tokens, boats, contracts, and houses, depending on the player count. It’s not critical, but it’s not ideal either, especially if you use the default storage (plastic bags), which is a terrible solution.

Luckily, I managed to get a hold of the Folded Space insert, which makes things a lot easier. Frankly, I wouldn’t want to set up the game without it. The starting action board extensions and starting tiles can be placed randomly, thus offering a level of variability. Further variability comes from contracts and player board extensions.

Once the game is set up and ready to go, the board and components require minimum maintenance and the gameplay runs really smoothly and quickly. 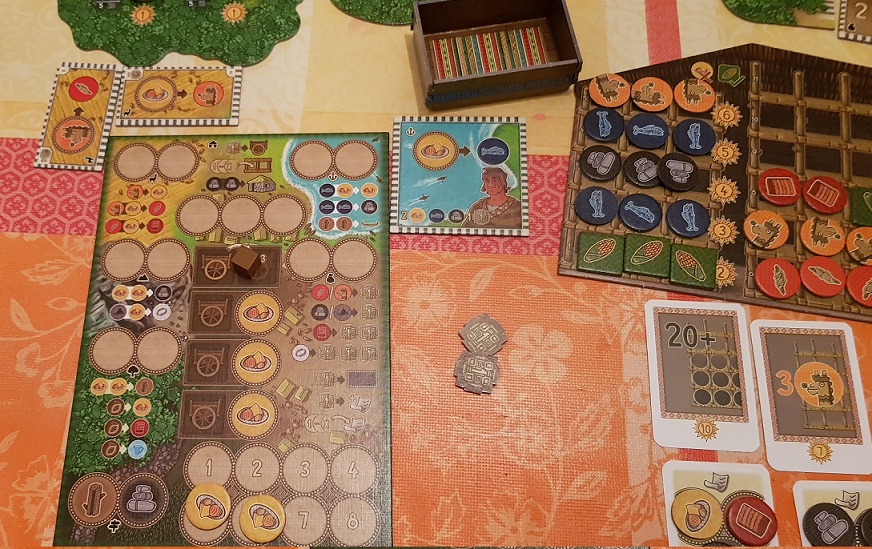 How to Play Altiplano – Overview

Each turn, you will draw a number of resource tokens from your bag. This is initially just four, but you can increase this to 8 by advancing on the road action space. You will then plan on how to put these tokens to good use on various action spaces.

For example, you might go to the mountain and use two food to mine a token of stone. All three tokens would then go to your container, which is emptied into your bag when there are no more tokens in your bag. There are numerous action spaces and resources (fish, food, wood, stone, alpaca, wool, cloth, jewelry, cacao, glass, etc), allowing for a lot of combinations.

Moreover, you have to take into account your movement, so that you’re in the right space at the right time. The goal is to use simple resources to produce ever more valuable ones. Resources themselves are scored at the end of the game, but you’ll make more points out of them if you fulfill specific orders or fill rows in your warehouse.

Helping you out on the way are board extensions, which you can buy at the market (they usually offer resource conversion at more favorable rates), houses that offer bonus points, and boats, which can help you attain a rare resource.

There are five board extensions on offer at all times. After each turn, the bottom one is removed and all the rest move one space down, making them cheaper to buy. Since the number of extensions depends on the player count, this mechanic also doubles as the timer for the game.

Altiplano offers you many options. To give you a nudge in one direction, mission cards are drawn before the game. Fulfill them (i.e. store 20+ goods, complete two orders that contain wool/cloth, and so on) and you get extra points.

While the manual proposes them to be a variant, I found that the game loses a lot of focus without a specific target, so I strongly recommend including them. The game normally ends when the stack of board extensions runs out and then the final scoring commends.

What Altiplano is good at

As already mentioned, Altiplano comes with great aesthetics. Deciding what resources you put in and which will retire into your warehouse (or to complete orders) is a very satisfying and strategic bag-building process. It’s exciting when you pull out new tokens. It’s also satisfying to fulfill contracts and see the warehouse nicely fill up.

There are different routes to victory that make the game feel distinctly different each time Perhaps you will focus on the alpaca-wool-cloth chain, the mining-jewelry chain, around fish, wood, or something completely different? Various starting extensions and missions you draw before the start dictate the general direction you go for and what resource orders you will focus on.

The use of a container (temporary storage of the resources) makes sure that all the resources from your bag are cycled through, reducing randomness and player frustration.

While the rulebook is not perfect, once you’re familiar with the game, the game plays very smoothly and is actually really simple to understand. This also makes it uncomplicated to teach. While I wouldn’t introduce it to a new player, a regular board gamer will get what you’re saying in minutes.

Altiplano plays equally well for all player counts from 2-5. I actually prefer it at two (or even solo), because you can finish a game in an hour and there isn’t really that much player interaction.

Planning your workers and movement is the right amount of crunchy: you need to plan ahead, both short-term and long-term. How to plan out this turn, what do I still have in the bag, and which resources to focus on? But the process is not so complicated that it would fall into analysis-paralysis territory.

I like how the extension stack acts as a game timer. You can buy more extensions to optimize your resource conversion, but if players buy 1+X extensions per round, the game is X rounds shorter. 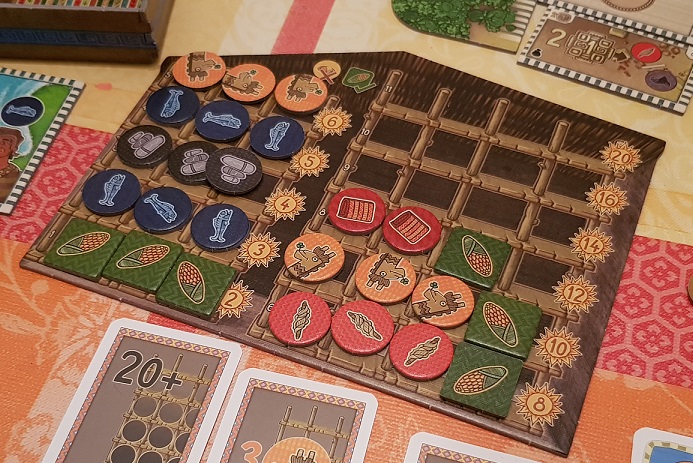 Storing a high number of components is a problem and investing in a proper solution (or doing something yourself) is mandatory. Otherwise, you’ll never get the game to the table. The urge to play will go away once you think of all the bags …

It can outstay its welcome, especially at higher player counts. The playing time extends a lot and your turns can start to feel repetitive. I prefer to play this with a low player count.

Nothing ground-breaking or game-shaking ever happens (apart from an occasional extension snatch). The game is comprised of small steps that slowly but surely lead you closer to your end goal.

There’s almost no player interaction during the game, everyone just minds his own business. The very little interaction that there is (buying boats, houses, or contract extensions) prevents simultaneous play and unnecessarily extends gameplay, which is particularly noticeable at higher player counts.

This is emphasized by asymmetrical starting board extensions, which nudge players into different paths, making interaction even less likely. I believe if the game would be designed around simultaneous play, it would fix a lot of Altiplano’s problems.

But the designer took Altiplano in a different direction with the expansion. The Traveler adds several mechanics that increase player interaction. Unfortunately, I’ve only played the expansion once, and it left me disappointed.

I found the new mechanics hard to understand, unintuitive, and unnecessarily complicated. A lot is probably due to (again) a poorly written rulebook. But since the expansion has an overall positive reception, I’ll give it another go in the future. 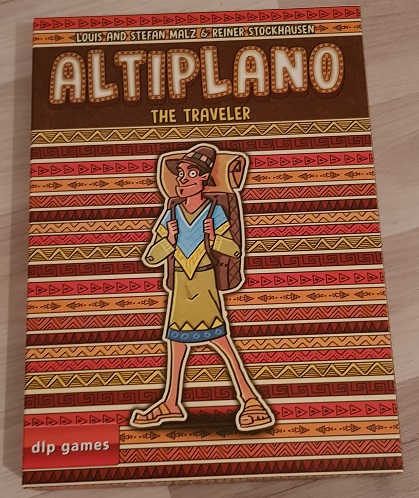 Fortunately, the players saw exactly what a game with such low player interaction and dragged-out playing time needs – a single-player mode. There is more than one available and after a brief research, I went with the one from sergio1985 on BGG, as it promised a very low overhead.

And it did not disappoint. The AI is there just to keep the pressure on by removing certain resources and you play for the high score. With the solo mode, almost all of Altiplano’s negatives evaporate and you get this condensed, very enjoyable experience. I strongly recommend you give it a go.

You can also try other modes that introduce a dummy player or an automa, but these require a bit more fiddling on the player’s part.

Altiplano is a solid bag builder. It has a good and bad side, but unfortunately for the game, there’s a lot of competition in the resource-conversion euro-games genre for it to stand out. I’d recommend it if you get a good deal, you play with a low player count (1 or 2), and you’re willing to invest in a storage solution.

I can’t really comment on whether it’s better than Orleans, since I haven’t played that one. Reading other reviews, players report both yes and no, so it’s probably a matter of personal preference. If you’re looking for a bag builder, my first recommendation would therefore be Quacks of Quedlinburg. It’s simpler, plays faster, and has an exciting press-your-luck element included.