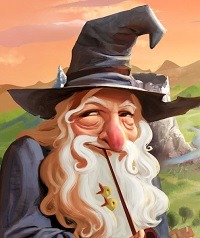 There are some board games, that can be played after only a couple of minutes of explanation, making them ideal when introducing new players to board gaming. Small World is one of those gateway games, although it has some bits that make the game interesting to more advanced players. Read my Small World Board Game Review to learn what those are.

The world is too small for all of us

Primarily an area-control game, in Small World, you will control a race with special powers, looking for their space in a colorful fantasy world. You’ll fight other races and other players, and, when you feel your race is starting to lose its power, you can choose a new one and continue the fight with them.

The game is not about building civilizations, but about conquering regions and scoring points immediately after each of your turns. Control of regions will move from one player to the other in a matter of turns. You can try to defend them, but don’t get too attached to them.

There are two double-sided game boards included in the base game, with separate maps for 2, 3, 4, or 5-player games. This ensures the game is well-balanced for all player counts, although the sweet spot is around 3 to 4 players. Maps come with various features: mines, mountains, hills, farmlands, lakes, forests, underworld, swamps, magic, etc., each giving bonuses to races or abilities. 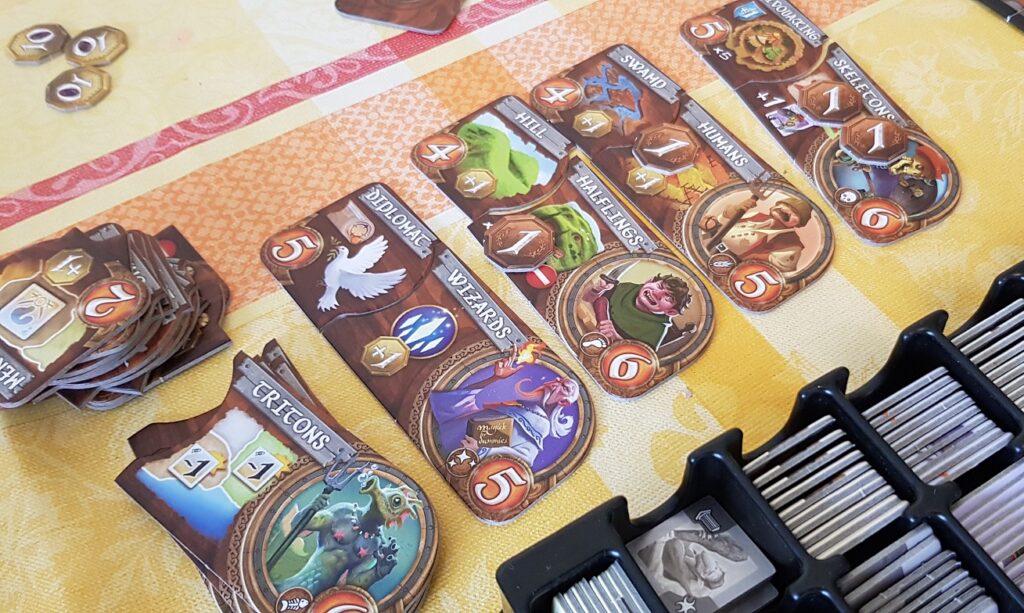 Your most important decision(s) in Small World is choosing a race and its special power. There are six random combinations of race and special powers available at any time – the top one is free, others cost victory points (coins). You must pick carefully, considering other players and the situation on the map.

Some of the available 14 races are:

And so on with Amazons, Elves, Halflings, Orcs, Ratmen, Skeletons, Sorcerors, Tritons, Trolls and Wizards, you get the picture.

You can do the exact maths, but there are a lot of combinations available. And, if that is not enough, there are expansions available that add more races and special powers. And they seem decently balanced too, with no race or ability particularly over or underpowered. Of course, there will be interesting combo appearing, but spotting and snatching them is a part of strategy.

It’s worth mentioning that the box insert comes with spaces for tokens for all of those races, all in separate boxes, so making them ready for a game is a piece of cake. The components are of high quality.

Small World is limited by turns (8-10), which depend on the number of players. Each turn, you will have several race tokens available. This number depends on your race and your special ability and is reduced each time one of your regions gets conquered.

You will use those tokens to conquer other territories. These can be empty, occupied by the Ancient tribe, or by other races. Combat is a simple have-more-tokens-than-the-defender, although you must take into consideration all of your and the defender’s special powers. This can be slightly confusing, especially when you’re still learning the game.

When using your final token(s) to conquer, you may be a couple of tokens short – you can overcome this with a roll of the die. But don’t count on it, because half of the die is empty. Now you have the option to redeploy – move your tokens around to defend some of your more valuable regions.

After that, it’s time for scoring. You get a coin for each region you control with your races (both in decline and active), plus you get bonuses for your active race (if any apply).

Other players will try to conquer as well, and as regions are conquered, defending tokens get removed from the game one by one. In practice, this means, that a race is only good for 3 or 4 turns. After that, you won’t have many tokens left to continue your conquests. Elves don’t lose tokens this way, so you could play the entire game with only them.

Now is a good time to put your race into decline. You remove all but one token from each region and flip them over. You will still get points for those controlled regions – until someone conquers them, of course – but, you won’t be able to control a declined race anymore (except Ghouls, they’re special).

Next turn you get to choose another race/ability combo from the offer and the whole process repeats. I find that you will on average go through 3 races in a game. Choosing a combo and choosing where on the map to make your initial conquest is what wins or loses the game.

Coins are collected after each turn and players keep them hidden until the end of the game. With observation, you can estimate how much money players have and can adjust your strategy accordingly (i.e. who to attack).

What I think about Small World

I find Small World a very good combination of simplicity and diversity. Simplicity comes from placing tokens and solving combat, while different races and abilities provide the diversifying factor, making every game different.

There is a tactical element to it: which regions to capture, where to reinforce your defense, which player to focus on; and a very strong strategic element: when to go into decline and choose a new race/ability combo. It takes experience and situational awareness to figure out which combo is best suited for the current situation.

Novice players often make the mistake of clinging to their races for too long and not going into decline. When you have 4 or fewer tokens available to conquer, it’s usually best to declare a decline.

One of the negative things about the game is, that the games are very close. How is that bad, you ask? If anyone plays really well and goes into the lead, other players will start to pick on him, equalizing the field. It means it’s not predominantly skill that wins games, but rather how left-alone one gets to be.

I find the sweet spot to be a 3 or 4-player game. In a two-player game, it’s hard to come back after an initial setback. An initial setback is easy to inflict if you start second – just pick a race that will do the most damage to your opponent, after he’s already played his turn.

A five-player game suffers slightly from downtime. There’s not much to do between turns (other than help other players calculate tokens and coins). It’s better when players get to know the races and special powers a bit more, but starting out, all the calculations take some time. A Six-player board is available as an expansion, but it’s hard to find in stores.

One tactic that I feel works nicely is to play defensively – reinforce your crucial regions, making them as costly as possible to attack, then use your diplomatic abilities (trash-talking) to divert players toward other targets.

All this comes with simple rules and a great-looking fantasy theme, making it very visually appealing. It’s a great gateway game – once you take into account all the abilities, it’s good for the more advanced players as well – but after a while, you will wish for more strategic options.

Besides the tabletop version, the game is also available on Steam. The price is for the base game, expansions can be bought separately.

The Digital edition of Small World is worth a buy, but I would recommend getting it while on sale.

Small World is a good game, especially for players who are new to board gaming (and kids from 6+) and have only played the likes of Risk. It offers decent strategic and tactical options, it’s set in a beautiful fantasy world, full of diverse races. Despite the high number, they are well-balanced.

The decline mechanic is unique too, as are multiple game boards. No player elimination is another positive.

Although a more advanced player can still have a lot of fun with the game, sooner or later he will desire that there would be more that he could do. More options to emphasize his skill, instead of equalizing it.

If you’re looking for something similar to Risk, but more advanced, Small World is a great choice. However, for more advanced players, I’d suggest taking a look at games like 1775: Rebellion or War of the Ring.