Twilight Struggle, a two-player Cold War simulator is occasionally available on Steam for a few euros. I tried it out and make my Twilight Struggle Review: Board Game and Video Game.

The review will focus on the video game version of Twilight Struggle, but I’ll make comparisons with the tabletop version along the way, so you’ll get a feel for what makes them similar and different. I do not own the tabletop version – when you read the article, you will understand why.

“From Stettin in the Baltic to Trieste in the Adriatic, an iron curtain has descended across the Continent.” Winston Churchill, 1946

Not many board games are as focused on the theme as Twilight Struggle. It’s soaked in the Cold War, through and through. Art, atmosphere, events, and the board are made around the theme, not the other way around.

You’ll be playing as a leader of one of the superpowers: the United States or the Soviet Union. Your task is to dominate the world: by spreading your sphere of influence, interfering in nations’ internal affairs, using historical events (like the Cuban crisis or the Korean War) to your own benefit, and competing in the Space Race on the side.

No direct war between players is possible – unless nuclear war happens, which means it’s game over. You’ll be making your 45-year-long duel (unless you win or lose sooner) on the map of the world, using other nations as pawns in your grand game of manipulation, intrigue, and deception.

How It’s Played – The Rules

By game mechanics, Twilight Struggle has easy-to-understand fundamentals. It’s made of 10 turns, and in every turn, you will play out several action cards one by one, which are all unique and based on historical events. There are both USA and USSR-associated events, as well as neutral events. That’s where the complexity comes from – every event is historically unique and unique in what it does. 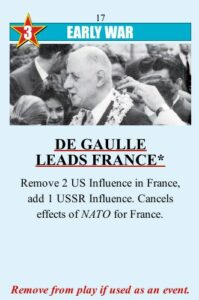 For every card, you will have the option to use its operational value for influence (increasing your influence in certain countries) or play out the event, which can have all sorts of benefits. If the event is one-time, the card will be removed from the game after that – if you use it for influence, it will get discarded and re-shuffled later on.

You can even use your opponent’s event cards for influence, but in this case, the event will play out automatically. The trick is to use a certain card at just the right moment so that the opponent doesn’t benefit too much.

Influence over countries and regions

Occasionally you will draw a scoring card for a certain region – these must be played until the turn ends. Comparison over the region’s control will be made and one of the powers will get victory points, depending on how much they dominate.

You want to play scoring cards, when you have as much control over the region as possible, of course. On the other hand, if the enemy is focusing his influence on Asia, there’s a good chance he has the Asia scoring card, so you better not neglect that.

Besides events and influence, you will also have the option to initiate a coup. This is a very powerful action, that can flip the allegiance of a nation instantly, but can also lower the DEFCON status – if you’re the one to initiate the nuclear war, you lose!

For a more peace-loving player, there is an option to invest the cards into Space Race, which gives its own useful benefits, as well as victory points. It’s the only way to play your opponent’s card if you don’t want his event to occur.

Placing influence and playing out events are pretty straightforward. But, when realigning influence, going for coups, or the space race, you will be obliged to throw dice to decide the outcome. But you can somewhat tip the chances in your favor by playing smart.

As said, victory points are based on influence (presence, domination, and control) in regions and other factors (Space Race or certain event cards). For victory, you need to:

As turns advance, played events from the event deck will get removed and ones from Mid-war and Late-war will get shuffled in, which symbolizes the passing of time nicely and fits in the context perfectly. But it’s not easy to make it into Late-war, games will usually end sooner.

If the game drags out all the way to the fall of the Berlin wall, endgame scoring is used to determine the winner.

Designed by Ananda Gupta and Jason Matthews, Twilight Struggle was originally released in 2005 and received an updated Deluxe Edition in 2009. It’s ranked number 14 (late 2022) on the overall BGG ranking, and number two among wargames.

It does fall slightly behind (modern games) in terms of component quality, but the fact that we’re still talking about it more than a decade later is proof that it has stood the test of time and become a modern-day classic. 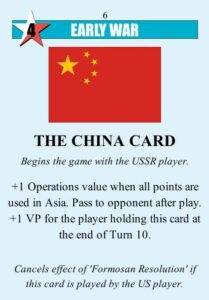 The Tabletop version comes with a great 32-page rule book, where the last ten pages are nothing but historical material about the in-game events. Frankly, I learned more about the Cold War from the rule book than in school.

If you have someone to play against and enough time, this is one of the best back-and-forth two-player games. The immersion level is very high, and you’ll feel like great leaders immediately (and start quoting JFK or talking with a Russian accent). Highly recommended by critics.

Click here to read more about the Twilight Struggle board game 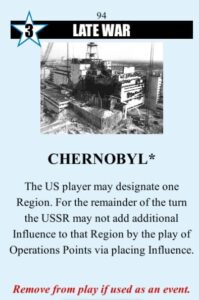 In 2016, the more accessible of the two was released – the video game. It’s a lot cheaper, plays faster and you don’t need a sparring partner. Let’s see its features in more detail:

How Does Twilight Struggle Feel Playing 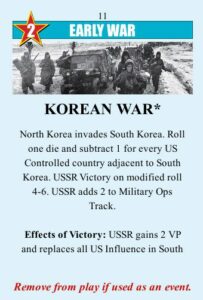 I’m going to be brutally honest here: in order to fully enjoy Twilight Struggle, you’ve got to fulfill some conditions:

I want to end this on a positive note because the game deserves it. It’s a very good two-player war game with a lot of strategic options and paths to pursue. The educational factor/historic accuracy is exceptional, as already mentioned.

For me, it lacks the fun factor slightly, but as far as I understand, the Cold War itself was not a very fun event, so in that regard, I understand that the authors wanted to catch that atmosphere.

And they succeeded in doing that, which is probably the greatest compliment I can give to Twilight Struggle.

If you would like a board game, set in a fictional post-war Europe, check out Scythe.

Check out 7 Wonder Duel, another 2-player only strategy game.

4 thoughts on “Twilight Struggle Review: Board Game and Video Game”