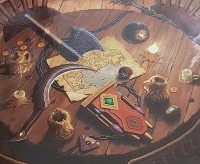 Gloomhaven: Jaws of the Lion Facts

If you click on an affiliate link and buy something, I will earn a commission – I am a member of the Amazon Associates program.

Introduction to Gloomhaven: Jaws of the Lion – Review

I had been a gamer my whole life, but it has been only a couple of years ago when I discovered the world of modern board gaming. As I was delving deeper, I inevitably began checking out more and more games: different genres, themes, and mechanics.

There was one game that usually came out on top of all those charts, Gloomhaven. I’ve been a strong admirer of it for a long time, but it also scared me. Almost a hundred scenarios with a playing time of a couple of hours per scenario? I’m sure the experience is fantastic, but who in their right mind has the time to ever complete such an undertaking? Certainly not me.

Charts, that Gloomhaven was on the top or near the top:

So Gloomhaven descended to the back of my mind. One day perhaps, when the kids are older and I have a spare table. Maybe then will be the time to experience the allegedly brilliant game mechanics and immersive campaign.

Imagine how thrilled I was when Cephalophair Games announced just what I was missing: a shorter, smaller, and cheaper version of Gloomhaven. Yes! Exactly what the doctor ordered. When Gloomhaven: Jaws of the Lion arrived in Europe, I was more than happy to pay the required sum.

New player, welcome to the city of Gloomhaven!

Thanks to the initial five scenarios that act as a tutorial, getting into the game is easy. Each of the tutorial scenarios only adds a couple of new game mechanics (for example, in the first one, you only learn about moving and attacking). The actions on the cards are explained in detail and the enemies use simplified decks. You never feel overwhelmed.

The tutorial is excellent for new players, experienced board gamers, and also those that bought the big-box Gloomhaven, opened it, were shocked by the massiveness of the game, and never touched it again. Jaws of the Lion is your second chance. Take it!

Gloomhaven veterans should start around scenario 4, where the game really begins. There are a total of 25 scenarios, but since you sometimes have to choose between different paths and some of the scenarios have certain prerequisites, you’ll experience around 20 of them in a single playthrough. With a playtime of 1-3 hours per scenario (depending on the number of players, how quickly players react, and the exact scenario), this is a lot of value for a game under $50.

Let’s see what a typical scenario looks like. First, you must decide on the difficulty. This depends on the level of your characters and you can further adjust it to your own liking. Then you set up the map with monsters, traps, treasures, and so on.

This step is vastly simplified compared to its big brother. Jaws of the Lion uses a scenario book, where the layout of the map is already prepared, along with some flavor text and scenario-specific instructions. That means maps can now also be more artistically pronounced. No more assembling the bland generic terrain tiles.

The story is nothing exceptional, but a decent narrative that ties the scenarios together neatly. The writing, on the other hand, is brilliant. It’s joyful, doesn’t take itself too seriously, there are references to Gloomhaven and other games, which will bring out a lot of smiles and chuckles.

That’s even more true for the between-the scenarios city-events which are a true gem of writing: original, imaginative, and immersive. They are random double-sided cards. Each of them comes with a decision that, if chosen correctly, can yield nice rewards, like extra equipment, gold, experience, or even side missions. It’s pretty obvious which decision is the right one, though. It usually involves you helping out and then you get rewarded.

Another thing you can do between missions is to buy and sell equipment. There are helmets, armor, robes, shields, consumables, weapons, and so on. Having equipment that complements your character’s skills is very important, especially on higher difficulties. One would wish for more (and different) equipment cards, as the choice is limited. But the quantity is reserved for the big Gloomhaven, I guess. 🙂

Now comes the most important part of the preparations – setting up your character. Inexperienced players will rush through this step, eager to play the game. But the brittle taste of a loss or two will teach them to carefully select items and action cards.

Action cards are what makes your character do things and selecting just 10 when you can have twice as many available is not an easy task. There are a lot of factors to consider: what does the scenario require you to do, will you need heals, ranged damage, melee damage, which of your powerful abilities to bring, and what will your fellow co-players bring?

The actual gameplay is based on playing cards from your hand. As said, you start with ten and play two each round. The cards have a top and a bottom action. The top is typically an attack, while the bottom is typically a move. But that’s not always the case – there are all sorts of actions: moves of various lengths, jumps, melee attacks, ranged attacks, heals, negative conditions, special actions, and so on. Some actions (usually stronger) also grant experience points or infuse elements.

Elements infused on the battlefield can enhance actions on later cards, but it has to be the right element. There are six of them, so infusing the right one at the right time is important to building powerful actions. But be careful, as monsters can also use (and infuse) elements. Getting a Disarm, just because that element is infused can be very painful.

There’s a lot of variety in cards for every character and you will unlock more of them as you level up. You can’t take every card, so choices will have to be made in which direction to build your character.

Unfortunately, there’s a level of ambiguity on some cards, or they’re poorly explained/overly complicated. Even the rulebook says players should decide for themselves what to do in such cases. For example, a monster’s card says he moves 1 hex toward his target. Let’s say the layout of the map is such, that there are two possible hexes he can move into and they both put him one hex closer to his target, but one of these hexes puts him into range for another character, which is still to act.

If you choose a favorable option (so your pal can range attack later), you inherently feel like you’re making the game too easy for you or even cheating. In the other case, you feel like you’re giving yourself a hard time for no reason. Either way, there’s a bitter aftertaste.

Another important game mechanic is Initiative. Each card comes with the initiative number. The turn order is then determined from lowest to highest, including cards from monsters’ decks. Players choose which one of their two cards is used for that matter. It’s usually better to act sooner, but not always (maybe you want to wait up for your buddy so she can heal you), so choose your cards wisely.

Yours and monsters’ attacks are resolved by attack modifier decks. Each character has his own and it can be manipulated as you level up. You can add stronger cards and remove bad ones, depending on how you want to build your character. Some will go for consistent damage dealing, while others will want to inflict negative conditions like Wounds or Stuns.

One thing you cannot do, however, is to eliminate the “miss” card. So there’s always a level of randomness involved. Let’s say you have carefully prepared your attack on the final boss, even using cards that go directly into the lost pile, attacking him for most of his hit points. Time to draw a modifier card – miss! That can be not only painful and frustrating but can lose you a scenario. Ouch!

All this fighting is making me exhausted!

Every time you run out of your hand cards, you must take a rest. This means you’ll lose one of your cards permanently and take others back in your hand. This also means you are directly limited to how many things you can do in a scenario. Some hard choices have to be made. Will going out of my way to collect that treasure leave me with enough cards to get back into the fight and defeat the rest of the patrol?

A scenario ends when you complete the objective and win, or all of the characters run out of life/cards (they are exhausted).

Losing a scenario is not a big deal, though. You still gain XP and looted gold, the only thing you lost is the time you played. The difficulty can be adjusted, but it still leaves a sour taste in your mouth when you have to play the same scenario for the 4th time. This can (and will) absolutely happen, as there are some serious spikes in difficulty throughout the campaign, especially around the midway, where the missions get significantly harder.

Some scenarios feel on the knife’s edge – you need perfect preparation, perfect play, and a bit of luck to succeed. I’d expect this from a skirmish solo game, not a cooperative campaign game for a more casual crowd. Other scenarios feel like the difficulty is not the same based on how many characters in which ones you play. I especially mean scenarios where you have to split up or cover a larger distance. They seem to suit a full crew of 4 characters better.

Things I like most about Gloomhaven: Jaws of the Lion

Things I didn’t like that much about Gloomhaven: Jaws of the Lion

There are a lot of things to like about Gloomhaven: Jaws of the Lion. They certainly outweigh the negatives by a large margin.

Jaws of the Lion is everything I had hoped for. Mechanically excellent, thematically strong, but also quick to set up and easy to learn. It’s a perfect way to enter the Gloomhaven universe, especially for the price it’s selling.

So, will this “preview” make me more or less likely to purchase the big box Gloomhaven? The answer is more but still unlikely. But that is down to my personal lack of time and space – your situation may vary. And if you’ve been on the fence – definitely give Gloomhaven: Jaws of the Lion a try, before you get the big box.

Gloomhaven: Jaws of the Lion 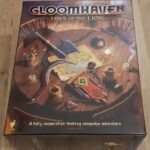