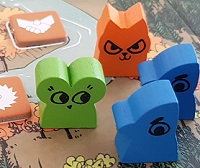 A wargame of woodland might and right, wrapped in cute overalls. Read my Root Board Game Review to learn how much of a game lies underneath the appealing exteriors.

Introduction to Root Board Game Review

Root, a Kickstarter success story from 2018 has taken the board gaming world by storm. Many were blown away by its charm and the quality of production. But there is also a game beneath all that facade. A strategic battle that bets its money on the asymmetry of the game factions.

You can’t speak about Root without mentioning its astonishing exteriors. Indeed, artist Kyle Ferrin did a remarkable job on bringing the woodland and its inhabitants to life on your table. The praise must be extended to the whole design team – the game is designed around its theme, with gameplay mechanics that make thematic sense.

The cute artistic style does wonders when attracting new players: both my partner and daughter wanted to play the game immediately, without knowing anything about it. If you have trouble convincing other players into board games, Root is certainly a game they won’t turn down.

Components, especially the adorable screen-printed meeples are a joy to handle. The cards and faction board come with unique art (which sadly goes mostly unnoticed during the play), which all guarantees Root is a piece of art that will turn heads.

Check out Praga Caput Regni, another game with a stunning presentation.

The game of Root is played on a map of woodland, which consists of clearings, connected by paths. There are two maps available: the basic autumn map, and the advanced winter map, with the option to randomize clearing suits.

The object of the game is to be the first to collect 30 victory points. An alternative way is to complete a special objective card, which can be acquired during the game. Factions earn points in different ways (the asymmetry factor); more on that later.

As mentioned, the clearings come in different suits (mouse, fox, or rabbit), which work with cards that you will draw during the game. They also come in the aforementioned three suits (+ fourth wild suit – eagles) and act as a special resource for actions in a matching clearing, different for each faction.

If animals from different factions meet in the same clearing, you can initiate a battle. This is resolved with two 12-sided dice, with the attacker always taking the higher number (unless you’re attacking the Woodland Alliance).

The numbers represent hits (how many meeples must the opponent remove) and this number can be increased with special action cards (Ambush, Sappers, and similar). 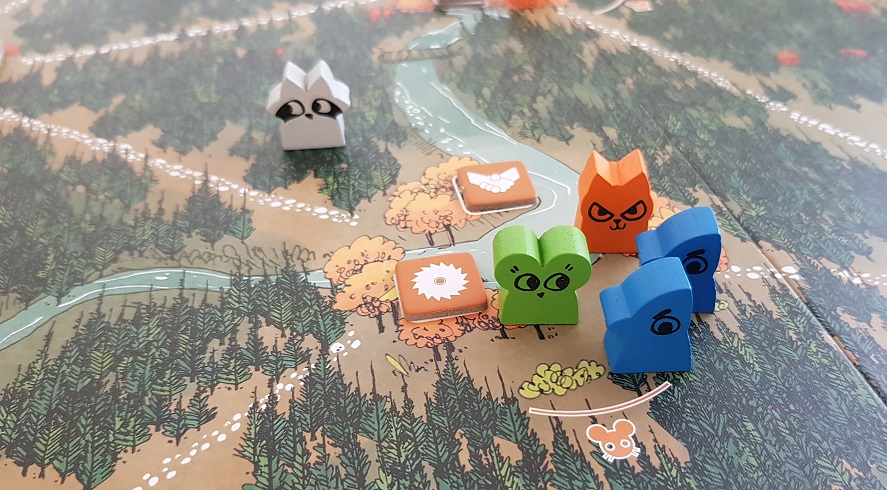 This is it when it comes to general rules. Everything else is faction-specific and to be successful, you must know your faction like the back of your hand. But to be truly competitive, you must also be wary of other factions: their pros and cons, what are they doing, and what you can do to stop them.

The faction boards are of great help with this. They provide all the necessary information: the turn order, buildings, costs, cards, and other resources. The back side has the checkboxes for the setup, making transitions from faction to faction as painless as possible.

Cats are industrious invaders. They have conquered the forest and want to turn it into their own industrial zone.

They start with a cat in each clearing and score points when building. Three types of buildings are available: sawmill (which produces wood used for building), recruiter (for adding more cats to the map), and workshop (for crafting card items for points).

The cats are the most conventional faction. They have 3 actions each turn, and you choose from movement, building, battle, or recruitment. They can get extra action by using an eagle card.

If you’re new to the game, you should start out with Marquise the Cat. Their playstyle most resembles other strategies and it’s easy to understand. They are quite potent when it comes to point-scoring, so other players will be looking for ways to snatch some territory from them early on.

They become vulnerable if they run out of space or resources to place new buildings, so you better protect your sawmills!

The Eyrie Dynasty – The Old Ways

The birds are the original rulers of the woods, but their cumbersome ruling methods in the war with cats have brought them to the edge of existence. The final 6 warriors are ready in the clearing in one of the corners, keen to bring glory back to their dynasty.

The Eyrie score points every turn, based on how many roosts (their only building type) they have on the map. But building them is not a straightforward task.

The birds can recruit, move, battle, and build, but the trick is that their actions must be pre-programmed. Each turn, you will add cards of various suits to your decree (order of commands), which is then carried out step-by-step.

Have a fox card in the Recruit slot? You must recruit in a fox clearing. Rabbit card in the Battle slot? You must battle in a rabbit clearing. The same goes for moving and building. Even though you can use eagle cards as wilds (which gives you more flexibility), this still requires a high level of planning.

If you’re unable to comply with your decree, you fall into turmoil. This means you lose all your cards from the decree (you get negative points for the eagles too!), end the turn immediately, and start over with the decree.

While the process of planning and programming your orders is enjoyable, the birds are quite vulnerable, especially in the early stages. Everyone will be watchful not to allow your decree to grow to a level where you’re an unstoppable killing force. Therefore, they will try to break your decree at all costs, which can set you back significantly.

But if you can lay low, be lucky to draw cards that suit you, and put another faction in the spotlight in the early stages, you might just pull your amazing combo decree off.

If the first two factions are in line with what you’d normally expect from a wargame, the Woodland Alliance is the first one to break the norm. They are the underground resistance, the guerilla faction made of original woodland inhabitants: rabbits, foxes, and mice.

The Alliance doesn’t start with any presence on the map. Instead, you get a supporters deck, which you use to spread sympathy onto clearings. You get points each time you place a sympathy token and this is your main income source of points.

You can add cards to the supporter deck from your hand. And you’ll need a strong supporter deck since spreading sympathy gets more and more expensive. Luckily, you also get cards from other players if they move to sympathetic clearings or remove your sympathy (outrage).

To finally gain a footing on the map, you must initiate a revolt, spending even more cards in a sympathetic clearing. Your newly acquired warriors can move and battle normally, but they can also be sacrificed to spread more sympathy.

Woodland Alliance doesn’t rely on numbers. It can only place three bases with a very limited amount of warriors. Instead, they use the bases strategically, to further boost the spread of sympathy. If other players don’t keep an eye on them, sympathy can spread like a disease. Outrage ability helps a lot, as well as their ongoing ability, which allows them to use the higher dice roll as a defender.

The Vagabond – I care only for adventure!

In the middle of the bloody dominance war over the woodland comes our lone vagabond. If ever there was an opportunistic character, that’s him.

He plays completely differently, think of him as a role-playing game. He can slip through thick forests and uses items to perform his actions. Boots for movement, swords for battles, a crossbow for assassinations, a torch for exploring ruins, root tea for refreshing items, or hammers for crafting.

He can craft the items himself, find them in the ruins or trade them from other players in exchange for cards. He has his own deck of quests which he can complete for more points, granting he has the required items and is in a matching clearing.

On top of that, there are several Vagabond “variants”. He can play several roles (a thief, ranger, tinker, etc.), which grants him special abilities, that require different approaches. He must take good care of his items – keep them refreshed and repaired (they can get damaged in combat). Sometimes he’ll have to spend a turn in the thick forest to repair them. His items are his livelihood.

Vagabond is both fun and challenging to play. A balancing factor, he freely decides which faction to aid, not to aid, backstab (and later help again). Often he’ll enter into a coalition for a shared victory, or work the whole table and snatch the victory in front of surprised faces. It’s hard not to upset other players with the Vagabond! 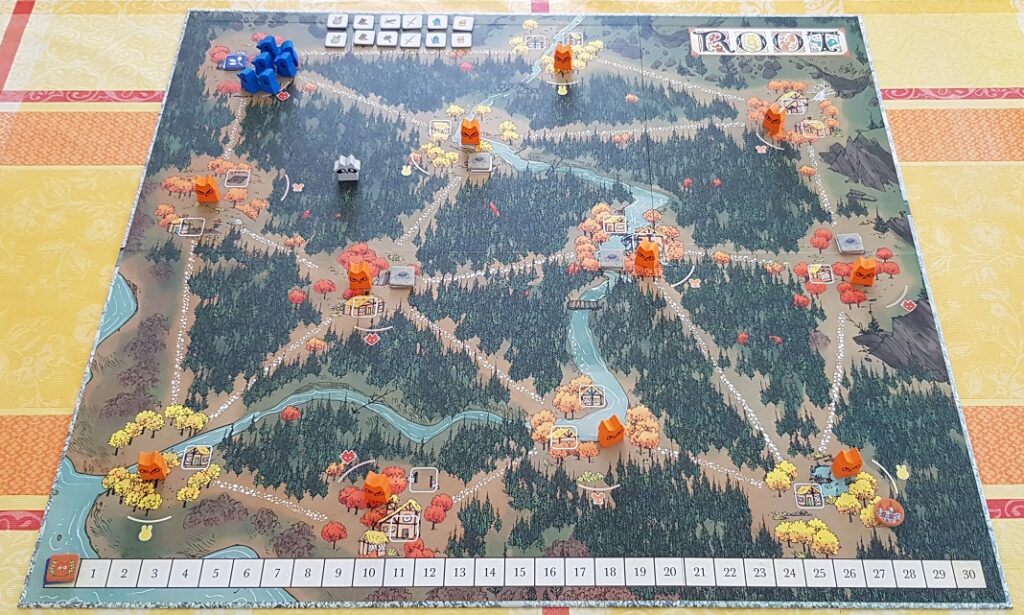 The publisher rode (and still rides) the very successful train of expansions. I won’t be the judge if they are more of the same or do they introduce mechanisms that “fix” the game, as I haven’t tried them. This passage is more or less just a list.

New expansions (Marauder, Landmarks, Clockwork 2, Hirelings) are in the making. If you plan to join the Root universe there’s no fear of running out of upgrade options.

If you thought the tabletop version is cute, then try out the Steam edition! The meeples are all 3D and animated, with the same art style as the tabletop edition. UI is pretty good, although I found that the table still offers me a better overview, especially of what others are doing.

There are special game modes, challenges, included, which are a good refreshment. Of course, you can play skirmish games against AI or online.

Both Riverfolk and Clockwork expansions are available and the price is fairly competitive. Definitely worthy of purchase if you’re into digital editions of board games! 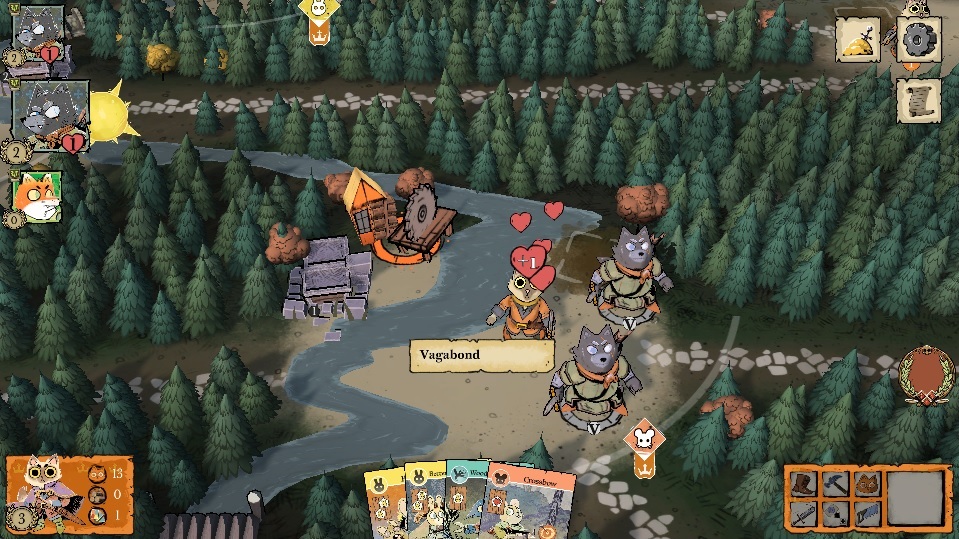 Root, while complicated at first look, is a wargame designed for families that play together occasionally. They will cherish the appearance and the joy of discovering its asymmetric factions. They’re also the target group for the expansions as they are a perfect gift that will bring a smile to everyone’s face.

The more experienced as a board gamer you are, the sooner you will notice the gameplay flaws that lie underneath the terrific facade. But I would lie if I said I did not enjoy my time with Root. It was really fun, but I don’t see the base game getting too much table time in the future.

More from the same creators: