I’m pretty sure everyone with a remote interest in board gaming has heard of Catan by now, if not played it. It has achieved legendary status in the last 25 years. But, since then, many board games have surpassed it, both mechanically and commercially. Read this Settlers of Catan Review to find out whether it still holds its own. Is it worth playing after all these years?

Catan was designed by Klaus Teuber and was originally published in Germany back in 1995. The game became hugely successful and popular, got translated into multiple languages, and sold millions of copies worldwide. It was one of the first eurogames that hit the global market and made its way into mainstream entertainment. Suddenly, everyone was playing it.

What Is A Gateway Board Game? + 10 Examples

After the original release, various extensions and expansion packs (together with reprints) have been released (and still are). For now, we will focus just on the base game. 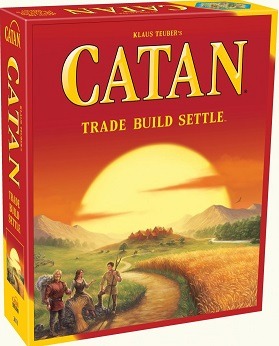 Theme and Concept of Catan

The players assume the roles of settlers, who are trying to settle on an island, which produces various resources. These resources can then be traded and used to build additional settlements, and roads, or buy development cards.

Your settlements, roads, and armies count for victory points. The goal of the game is to accumulate ten or more victory points – the first player to do so is the winner.

At its core Settlers of Catan is an abstract strategy game with elements of set-collecting and resource management. Its secret is, that the theme is well-thought-out and works brilliantly hand-in-hand with the concept.

Seting up a game of Catan

Game preparation begins with the laying of hexagonal terrain tiles (18 resource tiles + 1 desert tile) and surrounding water tiles. These can be arranged randomly, although there are suggestions in the game manual for a fixed arrangement that should give players equal opportunities.

Number tokens represent the probability of a tile producing a resource in a turn. This is determined by rolling two dice and the sum of the rolls is a number from 2 to 12. As a general guideline 7 is a result with the highest probability and the further away from 7, the rarer the throw will be.

It’s all pretty easy and straightforward. After a couple of games, you’ll be setting up games with blind eyes almost.

If you would like to avoid setting up the game altogether, you can do this by playing Settlers of Catan online for free – check the review of Asobrain platform.

When players receive their starting resources based on their initial villages, the game can start. On each player’s turn, there is a dice roll. The resulting number determines which tile(s) will yield resources. Each village on the edge of such a tile receives one resource and each city receives two resource cards. There are five different resources.

There is no hard cap on how many resources a player can hold in their hand, however, when a 7 is thrown, each player with 8 or more resource cards must discard half of the cards.

The player in turn then has options on what to do with his resources. He can spend them on building more villages, upgrading villages into cities, building roads, or buying development cards.

If a player buys a development card, the card is drawn from a special tile. These can contain:

Development cards can be played at any time inside a player’s turn.

When a 7 is thrown, no resources are given out. Instead, a player has to move a black meeple, a robber (at the game start, the robber is placed in the desert), to a resource tile of his choosing. That tile is then blocked from producing resources until the robber is moved somewhere else.

Moreover, if there are settlements on the adjacent tiles, the player who moved the robber, can rob one of the other players (who has a settlement on the edge of that tile) of a random resource card (draw one from the opponent’s hand).

Playing a knight card is basically the same as throwing a 7 – it gives a player a chance to move the robber (hopefully to one of the opponents’ tiles).

When a player has played 3 or more knight cards, he receives an achievement card called the Largest Army, which is worth 2 victory points. This card is transferred to another player if he fields a larger army.

How do you win a game of Catan?

The goal of Settlers of Catan is to be the first to accumulate 10 victory points.

Victory is usually achieved after 1-2 hours of gameplay, depending on the player count and their experience. More experienced players will complete their turns faster and the game will progress more smoothly.

If you hate losing at Catan, then check this article: Tips and Tricks for winning.

Luck in Settlers of Catan

There are two ways random factor plays a role in Catan. One is the initial tile placement and the second is the dice throws each turn. The first factor is the same for everyone, while the second tends to even out somehow as there are many dice throws in a game.

Dice can play quite a role in Catan, infusing a lot of excitement, but also frustration. Although there are numbers with a higher probability, it’s often more practical to have your settlements on as many different numbers as possible, just to ensure a steady flow of resources.

This part is also why so many people have a love/hate relationship with Catan. People tend not to understand how probability works and how to adapt their strategies. They blame all their bad play on dice. But with a proper understanding of game mechanics, one can embrace this element and treat it as part of the game.

There are a lot of options the player has in a game to demonstrate his prowess. It starts with initial settlement placement which is by far the most important decision. It hugely impacts how the rest of the game will be played out and what strategies a player will (and can) employ. Social skills also play a great role, since there is much to gain by trading.

It’s advised to help novice players with their initial placement so that they don’t fall too far behind even before the game starts.

Expansion for Settlers of Catan

Read about the most common Settlers of Catan expansions in the following articles:

But these two are only the tip of the iceberg. There are numerous adaptations, extensions, and stand-alone games based on Catan (like the one based on Star Trek or Games of Thrones). It has become a big franchise and the owners are aware of that.

The complete list is too long for this review, but you can find it on Wikipedia.

Settlers of Catan is still, after all these years, a good board game. It’s strong on the market, expansions and editions keep pouring in, and if you haven’t tried the classic yet, now is as good time as any. It’s still among the Top 10 Most Popular Board Games 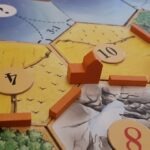 10 thoughts on “Settlers of Catan – Board Game Review”