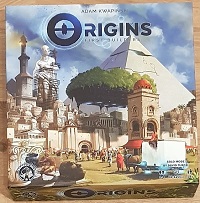 This article covers one of the latest entries from Board&Dice. Read the full Origins: First Builders Board Game Review to find out whether you should keep an eye out for it.

Ever wondered how ancient civilizations built mighty structures, such as the Pyramids, Stonehenge, or the statues on Easter Island? If you think it was clever engineering, combined with an abundance of time and workforce, well, you’re mistaken. Because it was with the help of … aliens (insert meme here).

Indeed, Origins’ theme of ancient aliens is original, I have to give it that. You control a tribe of people, with whom you visit encounter sites (under the alien spaceships) to persuade aliens to help you with building your city and advancing your civilization.

While the theme is original, unfortunately, it falls apart when you start playing, as it’s as dry as sand. The alien ships are present, but they’re nothing than a plastic circle with numbers. The aliens are not even present – not in person, nor as a special power or action. All you do is very earthly: constructing buildings, and not even spectacular ones. Granaries, stables, temples. Forget about mighty wonders.

If you’re buying Origins: First Builders for the theme, you’ll be disappointed. Yes, ancient aliens are a great idea and I’d love to see a game designer around it, but Origins is not the game that does it. This is a dry euro about managing your dice and advancing on tracks.

Components have their good and bad sides. Average is probably the word that describes them the best. While I liked the cutout player boards, dice, and dice trays, the resource tokens are so similar to each other, that it seriously hampers the gameplay. Particularly food and gold tokens look almost identical.

I find it baffling how this made it through playtesting, even more so, since the solution would be so simple and without extra costs. Just paint the backgrounds of the tokens differently.

The same could be said about the tone of yellow and orange, which look too similar. Surprisingly, this did not cause any problems during the play, so I’ll let this one slip. But it doesn’t look good.

When it comes to artwork, it’s very pleasant – what there is. Most of the main board is nothing spectacular, while the illustrations on the building tiles are detailed and beautifully painted. Unfortunately, they’re rather small and you don’t notice them during the play much – so stop and look at them.

The most spectacular piece is certainly the box/rulebook cover, which proves the artists had a solid idea on where to take this game, style-wise. Unfortunately, they had a very limited opportunity how to express themselves, when it comes to the components.

The rulebook is of the highest standard. I specifically liked how it is structured – it teaches the key concepts first, then it delves into the turn structure and actions in detail. There are colorful examples, checklists, detailed setup, explanations, and the iconography appendix.

I had absolutely no issues learning the game and the rulebook can undoubtedly be used as an example of good design.

Granted, the game is not too complicated, in the first place. This is dice placement at its finest – the dice represent workers, and the more you have, the more actions you can perform.

The slots at five spaceships are what allows you to perform actions: collect resources, construct buildings, advance on military and temple tracks, add more dice to your portfolio.

What makes the game interesting is that the value of the die must at least match the value of the alien spaceship. The ship’s value increases with every dice placed, and then it comes around from 6 to 1 to start again. Although you can place any number of dice, it’s those numbers that will allow players to block one another.

The color of the die also matters since you can perform a bonus action if it matches the color of the alien ship. Moreover, there are archons, special dice that can gain several colors, and one-time use dice.

But the clever bit happens when you pass and take back your dice. They now add +1 to their value, making them increasingly more powerful. When they reach level 6, you’ve got a choice. Do you place them one more time so that you can get an extra action and then they go back to add another color to your archon? Or do you use them to close a district for maximum points? 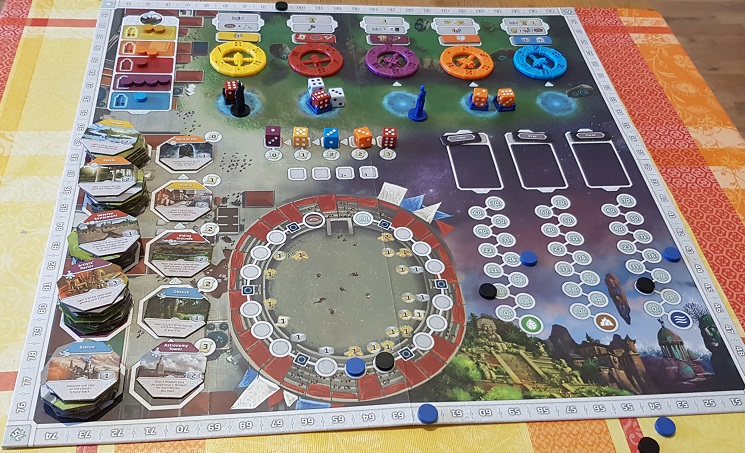 There are three ways to use your actions to score points. By far the most interesting is the construction of buildings. There are several nuances here. There’s the offer where buildings move up, and you can get them cheaper the further up they are. Then there are the objective cards that picture certain patterns that you must complete to score extra points.

Furthermore, each building has a special ability, which is activated when you place it, and when you close a district. Last, but certainly not least, there’s the closing of districts. You do this by placing a die in the middle of four buildings. This causes the aforementioned pattern scoring and building activation (if a building color matches the die) and adds the die to the endgame scoring.

Therefore, you want to place higher value dice there. The score is the product of the die value and the tower height of the same color on your palace, so you want to increase that one, as well. You can do that simply with gold, but it’s not that simple to get gold.

The second way of scoring is the three temple tracks. The higher you end up, the more points you score at the end. The temple tracks also offer Zodiac cards, which are ongoing abilities that can help you during the game.  The cards are not permanently yours, so there will be some competition here and they’ll change hands between players during the game.

You can score some serious points available at temple tracks. But it takes a long while to get that high. You definitely need to produce some sort of synergy with the buildings to help you out.

Finally, there’s the military track, which is supposed to simulate conflict among the players. Instead, it’s an underwhelming track, that gives you few points and an occasional resource, and it’s more often than not neglected.

The game end is soft-capped. When certain conditions are met (i.e. all the district patterns are complete or the stock runs out of dice), the current round is declared as the last. After that, the scores are summed up. 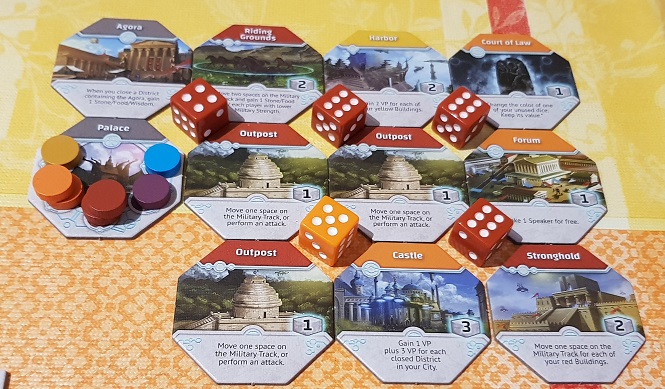 What I liked at Origins: First Builders

As you might have guessed, the thing I like the most about Origins: First Builders is the concept of dice maturing, together with city building and district scoring. How and when will you use your dice creates interesting tactical choices and meaningful, enjoyable decisions.

Creating synergies between districts, dice color, and towers is very satisfying to accomplish, as it yields lucrative goals (a lot of points + activating building abilities once more) and is key to winning the game.

The rest of the game is average at best. The temple tracks are unexciting, even when the Zodiac cards drawn are useful. Although the tracks can earn you a lot of points (if you climb high enough), it’s just like climbing a ladder – boring and repetitive.

The military track is even worse; the rewards are way too small to bother and the game wouldn’t suffer one bit if they removed it.

Ideally, I’d like to see even more development on city-building and dice manipulation, as those are the concepts that are the most enjoyable. Maybe even ditch the tracks altogether, and make the game more thematic by introducing alien superpowers.

The game scales alright for 2-4 players, although the game state changes a lot between turns in a 4 player game, making it hard to plan ahead. Even so, the gameplay is smooth and the downtime is not a problem, as you’re usually interested in what others do, because it directly affects you.

There is some player interaction. Along with the aforementioned ship value manipulation, there’s competition for building tiles, tower discs, dice, district cards, and zodiac cards. Certainly much more than at some other euro games.

Two solo modes are available. Training, where you compete against a high score, and a more complex version by David Turczi, which simulates a player and can be downloaded as PDF on BoardGameGeek. It’s elegant and easy to manage.

Both serve their purpose, particularly as training tools. They’re quite tough and you need to play close to a perfect game to beat them, so there’s definitely a challenge there.

When it comes to the game’s longevity, it’s hard to judge after only a few plays. Although there’s a decent amount of variability, the games I played didn’t feel that much different from one another and I didn’t have a big urge to play again and try something else.

As a personal preference, I don’t see myself playing this game much in the future or even keeping it in my collection.

Origins: First Builders is not a bad board game. It has some good ideas, particularly in the area of dice maturing and usage. But other than that, there is nothing that makes this game stand out from any other euro on the market.

If it interests you, I won’t advise against it, as the time spent playing was enjoyable. On the other hand, it’s very unlikely to find a spot on any of our Top 10 lists and will sadly be lost and forgotten in a sea of all board games in a couple of years’ time.

>>>You can buy Origins: First Builders on Amazon<<< 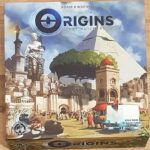