Tile placing games are one of the easiest board games to get in. Mechanics are usually quite straightforward and there is an indescribable satisfaction, as you watch your realm grow and expand. I’ve featured some tile-placement games before and now it’s time for Isle of Skye Board Game Review.

Writing about the Isle of Skye, it’s hard not to mention Carcassonne. It draws a lot of ideas and mechanics from it, but also tries to add some of its own, especially when it comes to diversifying scoring and objectives. We will see whether it succeeds.

The Isle of Skye is an island in the northwest of Scotland. Now a peaceful tourist destination, a couple of centuries ago, it was a playing ground for several Clans. You play as one of those clan leaders, fighting for dominance to become the one King of the Isle of Skye.

The theme is well implemented and suits the game right. On the tiles, you’ll see castles, brochs, lighthouses, ships, farms, sheep, cattle, and whiskey. Yes, whiskey, because you’ve got to have something to do on those cold rainy days.

Clans of Caledonia Review – Scottish Whiskey at its Finest

From Chieftain to King

Contrary to Carcassonne, in Isle of Skye, every player builds his own kingdom. In order to become the King, you have to accumulate the most victory points. These are scored by completing several scoring objectives (more on those later) and you do that by building your kingdom carefully. That means laying the right tiles in the right places.

Tiles have three basic landscape features: pastures, water, and mountains. When placing them, these must match the neighbors. Roads don’t have to match, but it’s often beneficial if they do. (And it looks prettier.) It pays to complete areas (enclose them with different terrain) as there are several scoring bonuses to that.

The game is played over six rounds and each has six phases:

Players receive money: 5 coins for your castle plus 1 for each barrel of whiskey connected by road. From round 3 onward, trailing players receive extra income (a catch-up mechanism to mitigate bad luck at buying tiles).

Every player draws 3 tiles from the common bag. Now you have to set the price for two of those, the third one is discarded. You stake your own money when setting a price. It’s a fine balance between protecting your tiles, trying to sell, and having enough left to buy a tile yourself.

The two tiles that you set the price on them, can now be bought by other players. Every player can only buy one tile. The selling player receives his staked money back plus the same amount from the buying player. Money from unsold tiles is lost.

To ensure fairness, the buying order changes every round.

This mechanism adds a level of interaction and planning, but it’s sometimes slightly frustrating when the opponent buys the tile you so desperately need. But in the end, it’s a big improvement over the draw-one-and-place system.

Now it’s time to place your newly acquired tiles into your territory. As mentioned, basic landscape features must match, but other than that, you can combine new tiles any way you want. Of course, you will want to place them in a way that will bring you the most benefits.

End of Round Scoring

After every round, certain objectives will be scored. In the setup phase, four objectives (A, B, C, and D) are drawn from a total of 16. This ensures diversity – every game plays differently since you have to focus on different things.
To further diversify the rounds from one another, in every round different objectives are scored:

The system can be a bit confusing, especially at the beginning, but after a few games, you will feel more comfortable and begin to see the elegance in it.

Some examples of objectives:

End of the game final scoring

After the last round, there is one more scoring done. Now you will receive points based on the scrolls on your tiles (some tiles have scoring scrolls on them). These bonuses can be:

As a special bonus, scrolls in completed areas score double. Finally, any left-over gold is converted into victory points at a rate of 5 gold to 1 VP.

Journeyman adds a progress board for each player, a journeyman meeple, and new scoring tiles. Between phases 5 and 6, there is now a new phase, the journeyman phase. Use your board to get additional points and income, place waypoint cubes to indicate tiles you plan to gather resources from and move your Journeyman to collect them.

If you wanted another layer of complexity in the base game, Journeyman will give you just that.

Druids expansion splits the buying phase into two. The first one is buying from other players as usual. Second, you can buy a druid tile from the dolmen board.

These are like normal tiles, but often have a stone tablet on them, granting abilities you can use during the game (like discounts at buying tiles, scoring scrolls one extra time, etc.). Six new scoring tiles are also added.

This expansion works really well for two players, as it mitigates the low tile turnover – now you have more chances to find that tile you need to complete something.

There are also mini-expansions and promo packs. These include extra tiles and are also a good buy – if you are lucky enough to find them somewhere. You can combine the expansion with the base game any way you like – add the first, the second, or both.

Both major expansions add a lot to the game and once you’ve tried them, you won’t want to play without them.

The publisher of the digital edition is a well-renown Asmodee Digital (their best digital editions include Scythe and Terraforming Mars). That pretty much guarantees a well-polished product.

The presentation is top-notch, it looks great, and it sounds great. The theme and graphics are just like in the tabletop version. All the rules apply and so on.

The user interface is good: you see your kingdom in the middle, tiles at the bottom, your and your opponents’ scores, and money. Their kingdom is just a click away, and you can take a look at it anytime.

But it’s not as transparent as the real thing: it lacks a bit of overview, but it’s not the fault of the digital edition, but rather the multi-board nature of the game itself.

I find that games that use a mainboard (like Small World or Catan) work better digitally. 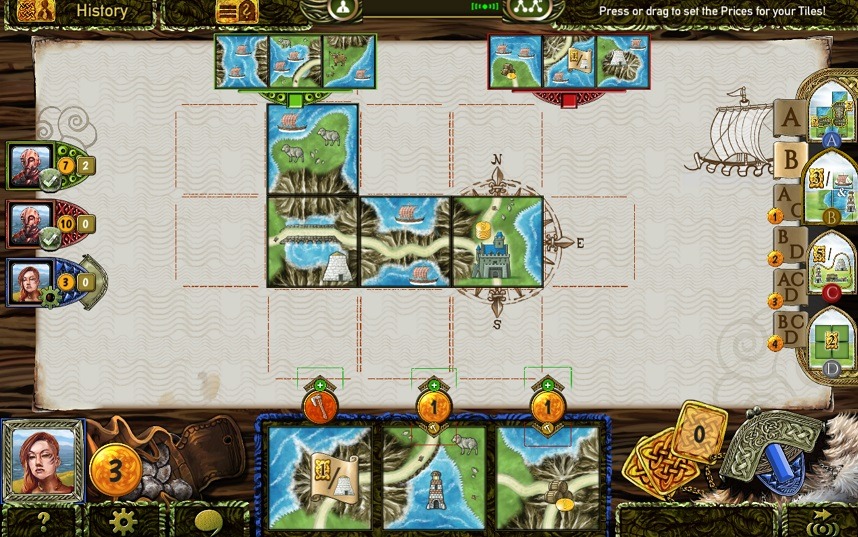 No expansions are available. I can understand about the Journeyman – the above problem would only be greater with another board to look after, but Druids would fit in perfectly.

At their highest difficulty, bots offer quite a challenge, which I welcomed. Of course, you can also play against other players online.

I enjoyed the digital edition, but the real thing is a lot better in this case.

I’d say Isle of Skye is a good next step in tile-laying board games. Its clever buying system and dynamic objectives are much of an improvement over traditional mechanics.

They are also a thing that will keep the game fresh for longer and make you return to it over and over again, especially if you add an expansion or two. It’s a game that will leave Carcassonne dusted on the shelf.

If you have a comment or an opinion, leave it below.

Farming in the Andes: Altiplano

Draw your own tile: Cartographers

Isle of Skye: From Chieftain to King