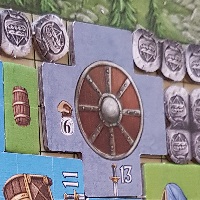 This article explains the three reasons why behind a simple beat-your-own-score solo mode in A Feast for Odin lies a deep and intriguing system, that offers immense replayability.

Why is A Feast for Odin an Excellent Solo Board Game?

There are three reasons why A Feast for Odin is a top-grade single-player board game. It’s quick and smooth to play, its open-world nature encourages exploring different approaches, and its scoring system provides measurable results.

A Feast for Odin is a large board game, with numerous components, and a fairly large footprint. But, for a game of its size, the setup is surprisingly short, which is mainly down to two trays for tiles that come default with the base game.

The only tedious part of the setup is the mountain stripes, which require you to take resources one by one and place them. Everything else is dealt out and prepared in minutes.

However, you do pay that swiftness back in the teardown phase of the game, where you have to take every single tile from your boards and place them back into storage. This does require a bit more time. Tip: If you have little kids around, they might see this as a fun activity! 🙂

Is A Feast for Odin Difficult to Learn and Play?

The rules of A Feast for Odin are clear and without any room for ambiguity. Therefore, after the initial teach, the games go by without much referencing to the rulebook. Furthermore, a clear iconography and an easy-to-navigate rulebook + appendix (for those cases where you have to check out what a card does) help with the smooth gameplay.

Solo rules are hardly any different to multiplayer, making the transition from one to the other painless and intuitive.

As the solo game is played for a high score, there’s no bot or automa to upkeep. No, you’ve got all the playing time of the game available for your actions. This means that A Feast for Odin condenses many deep-impacting strategic and tactical choices into one hour of gameplay.

As a bonus, the game is bright, colorful, and thus much more appealing to put on a table than let’s say Gaia Project. 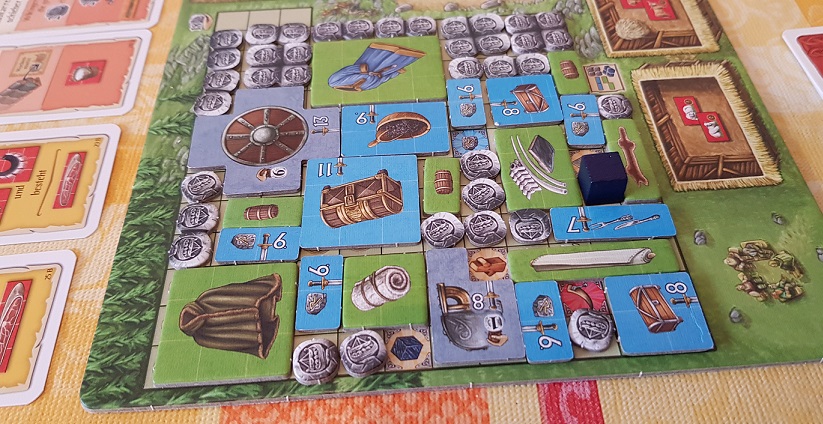 A Feast for Odin is a game of many possibilities. In contrast to most solo modes, it’s not too restrictive in resources and action slots. You almost always have enough to do what you want (particularly when it comes to feasting).

How you will distribute your resources, is what matters. That’s a lot less frustrating than always being one coin short of being able to do something meaningful.

The sandbox-y and relaxing nature make this a great therapeutic title. Puzzling the boards is stress-less, almost casual. And the abundance of possibilities feels liberating – again, this is not something we’re used to in solo board gaming.

Of course, to achieve a particularly high score, you do need a sound strategy in place. These are often shaped around occupation cards, which give small bonuses to certain actions. Combined with weapons, these act as tiny encouragements about which path to take in a game.

There are three decks included in the base game, offering almost 200 unique occupations. That should be plenty of variability to explore – even for the most enthusiastic players. And it’s not just variability for the sake of. It makes you want to try a different set of cards and play again – a true measure of replayability.

Further tactical element is added by using two alternating colors of Vikings. Your first color stays on the board, effectively blocking the actions slots for you in the next round. That way you get more control over what spaces are available.

Instead of frustration when an opponent blocks a slot you want, it becomes a part of the strategy. Do you want to flip tiles from green to blue now, or do you want to keep the slot open for the next round when you’ll have more tiles to flip?

Not just with actions lost, you also have more control over the exploration boards. Since you’re the only one competing for them, you can choose when you want to get them. Go for an early grab, wait for a flip or accumulate silver on them? Whatever you want.

No one is going to snatch them away in front of your nose. Which works perfectly with the relaxing atmosphere, already set. 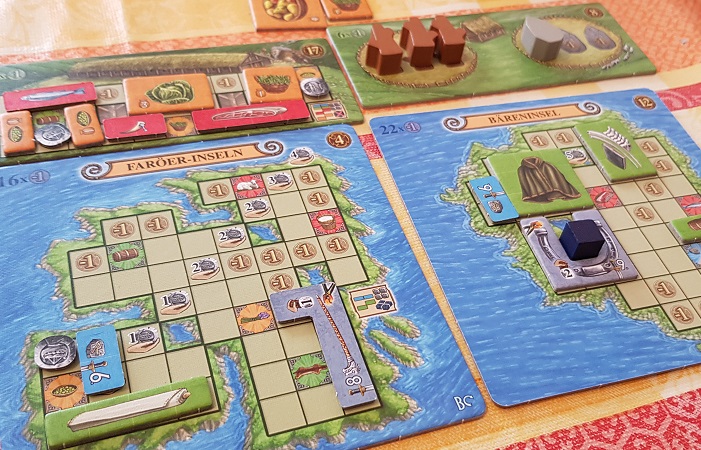 There are several ways how solo board games measure success. First, there are games where there’s a specific goal to achieve. I.e., completing a scenario goal in Robinson Crusoe or conquering both cities in a Mage Knight Solo Conquest.

Second, there are games where you play against artificial intelligence. This is usually a deck of cards that tries to replicate a human opponent which you have to beat.

Third, there’s simply the aim to score as high as possible. While this may at first seem like a lazy way out, in A Feast for Odin it works brilliantly. It complements the relaxing nature of the game, is upkeep-free, and lets you focus on your play.

But more importantly, it produces measurable results. If you score 130 points, you can compare that to your previous results easily. Or go to the forums and compare that to others. Anyhow, it’s a tangible number that you can use to see how well you did.

Conclusion – Where to Next?

It’s because of these three reasons, I believe solo mode captures the whole essence of the game perfectly. It’s not a downgrade from multiplayer or a last resort, but a fully-fledged game mode that can be played as an exclusive solo board game. Therefore I can recommend it to solo players without hesitation.

Looking even farther to the future, there is the upcoming Danes expansion, as well as the Swedes expansion. These promise new features, such as campaigns, asymmetrical starting positions, an explorable map of Eastern Europe, adventure and weather elements, and more.

As you can see, A Feast of Odin game system is quite alive and kicking and it’s only looking better for the future. If you’re considering hopping aboard, now is the perfect moment.