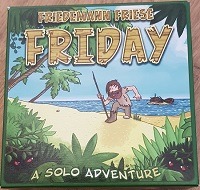 Friday, a small, 30-minute solo deck-building board game has been around for a decade. Read my Friday Board Game Review to find out if it’s worth buying.

Daniel Defoe’s book from 1719, Robinson Crusoe has been an inspiration to many modern popular stories of people trapped on a far-away island. Friday, on the other hand, is set right back in the original storyline.

Check out Robinson Crusoe: Adventures on the Cursed Island, a much heavier game with a similar theme.

You play as Friday, Robinson’s trusty companion and your job is to help Robinson in surviving the island. You need to strengthen him for the final fight against the pirates.

Friday is a deck-building game, and there are not many components to it. Besides the deck of cards, there are wooden life tokens and cardboard boards for the decks (so you know what is what). The quality of components is pretty solid, especially for the price Friday is available at.

The art is pretty nice too. There are a lot of green shades used for the illustrations of the island so that you can feel like you are right there. Without the fear of dying, thankfully. 🙂

Should you sleeve cards?

Before you start, you have to sort the cards into several decks:

You start the game with 20 life tokens. You can change the difficulty of the game by adding more bad cards and/or reducing your starting health. The difficulty levels are described in the rules.

Gameplay – How is it played?

Each turn, you will be fighting one hazard with your fighting deck. You draw two hazard cards and decide between the two. This may not seem like much, but choosing the hazard is the most important decision you will make in Friday.

Unchosen hazards go to the hazard discard pile and wait for the next phase, where they will be available to be chosen once more.

You fight the hazard by drawing a number of fighting cards, trying to beat the hazard value. The numbers are different for each hazard and are shown on the hazard card. You can sacrifice life points to draw cards beyond that number.

Some of the fighting cards also come with special abilities (i.e. you gain life, draw free cards, exchange cards, double the fighting strength of one card, and so on) which you are free to use when the card is in play.

The fight ends in one of two ways:

If you won, you now receive the hazard card. Its other half is used from now on as it becomes your new fighting card. Tougher hazards produce better fighting cards.

If you lost, you must pay the difference between your strength and hazard strength in life points. For those life points, you can then destroy (remove from the game) some of the face-up cards. Losing is a great way to remove useless cards from your deck – sometimes you’ll even lose deliberately.

If at any point you run out of cards in your fighting deck, you add one Aging card to your discard and re-shuffle the deck. Aging cards are really nasty negative special abilities (they make you lose health, stop you from drawing more cards, or have a big negative strength) which you will want to remove from your deck when they come up. You can do that by losing the hazard or, preferably, by using a Destroy special ability.

When the hazard deck runs out of cards, the discard is shuffled, and you advance from the Green onto the Yellow phase. You now use the second strength number on the hazard cards. There’s also the Red phase, using the highest strength numbers before you face the pirates in the final showdown.

The pirates work just like a regular hazard card, only much much more powerful. You’ll need a lot of cards and clever usage of special ability combos to beat them.

Friday Board Game Review – What do I think?

Friday is all about building your deck. You start out really weak and the only way to get stronger is to get those hazard cards, while also removing bad cards from your deck.

The Green phase is usually crucial and it sets the path for the rest of the game. You need to take a few well-timed losses and a bit of luck with the hazards. As you only draw a couple of fighting cards, there’s not much ability-combining going on yet. I find this part a bit tedious and wish you would start out slightly stronger.

Yes, deciding which hazard to fight is important, as it sets you up for the rest of the game. It’s also vital to keep track (counting cards) of what is still left in your deck, but still, the early stages are not the most exciting part of Friday.

It’s when you have built your deck a bit (Yellow and Red phase), that Friday comes alive. You can now take on more difficult hazards and draw more fighting cards, which gives you a lot more options on your turn.

It’s when you have five cards in front of you, some of them with special abilities, and you’re still a few points short of defeating the hazard, the fun begins. Now you have to decide which abilities to use. Adding life is straightforward, but destroying, exchanging, and drawing cards is not. Often you will have to gamble on your life tokens for extra cards.

This combining of elements is even more pronounced in the final fights against the pirates. It’s when I find the game most enjoyable to play. You have to use the synergy between the cards: doubling strengths, copying abilities, destroying useless cards, and so on. It gets quite complicated and very enjoyable – I found the overall pacing, thought process, and mechanics of these final fights very similar to the brain-burning in Mage Knight.

That is if you manage to survive that long in the first place. Life tokens go away quickly and there are never enough of them. Drawing a +2 life card feels relieving, but losing 5 against a tough hazard feels equally devastating.

Don’t think Friday is a walk in the park. It’s a really difficult game. Even on the easiest difficulty, you will die quite a lot, before you score your first win. I don’t know who the higher difficulties are for, because I find the easiest more than challenging. 🙂

Check out Lews & Clark: The Expedition. A historical race to the Pacific.

As a challenging, quickly set up and played game, I like Friday very much. The only negative being tedious early stages, it features good deck-building mechanics and fun card-play, wrapped in a compelling theme with goofy artwork.

Counting in the super low price tag, Friday is an essential part of every solo gamer’s collection. 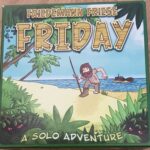