The base game of Mage Knight comes with four heroes (I’m going to use the word hero, although the way they act is often far from heroic) and expansions add three more, for a total number of seven. This article is an overview of Mage Knight heroes, their deed decks, and their personal skills.

In my initial review, I hinted that there is not enough diversity among the heroes, but since that, I have changed my opinion slightly. I have played the game a lot more since then, and so, the nuances between the characters became more apparent.

They each have enough of a personality that makes them unique to play. You can (and you will) build them out differently in each game, as there will be different skills, advanced actions, spells, and artifacts drawn.

But first, we’re going to go through the basics and take a look at the cards that are (mostly) shared among them. Then I’ll show you what makes them stand out.

The saying goes that pictures speak louder than words, so there’s an image of every card and skill, so you can better understand its ability – just read the text.

The standard deed deck consists of 16 basic action cards. Each of the characters has 2 of those cards replaced with a stronger version of them. First, let’s take a look at what the base actions are.

Generally, we could divide them by their color – the mana that is used for their stronger effect, but I prefer splitting them up by the type of action that they do. Considering this, I came up with 4 main categories: move, mana, influence, and combat actions.

March and Stamina are your basic movement cards. You get two of each and their effect can be doubled with green or blue mana.

Three action cards are specialized in managing mana. Crystallize is useful for storing mana as crystals, while Mana Draw comes in handy when you need more of it from the source.

Also very useful is the strongest effect of the Concentration card. It demands green mana and another action card, but it gives the stronger effect of that second card +2. Especially useful in combat (i.e. use it with Swiftness to get Ranged attack of 5), but don’t forget about Moving and Influence too. 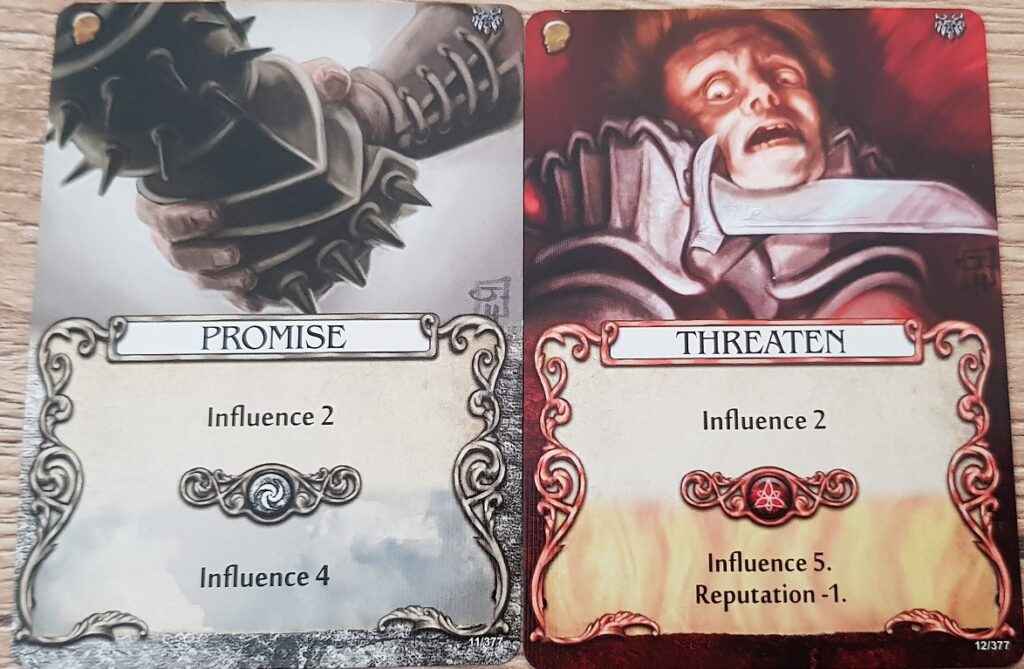 Promise and Threaten are your basic Influence cards, used for interacting with locals, mostly recruiting units. A stronger effect of Threaten makes you lose your reputation, but it’s usually worth taking, particularly if it allows you to recruit a powerful unit.

Your basic battle actions: base attack and base block.

On top of those, there are a few special “combo” cards, that can do more than one type of action 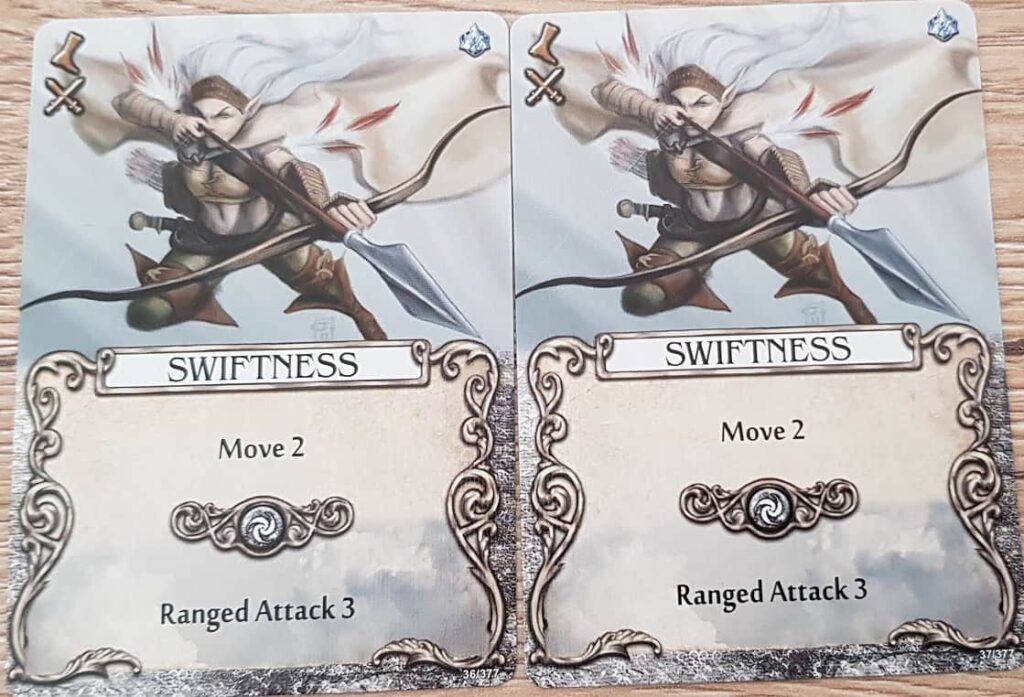 Two Swiftness cards have a variety of uses. Primarily, you’d want to take the enemy out with a Ranged Attack. If that’s not possible, you can always use it as a part of the normal attack phase. On top of that, there is Move 2, which you can use without mana. 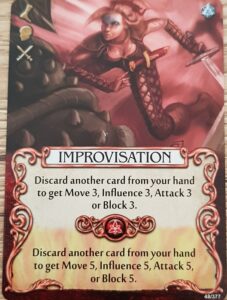 A very powerful action card, but it demands a sacrifice in form of another card. Having it in your hand gives you a lot of flexibility. 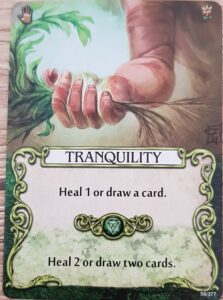 Your only heal card in the starting deck. You can heal rank I and II units with it or yourself. Drawing extra cards is a very useful alternative. 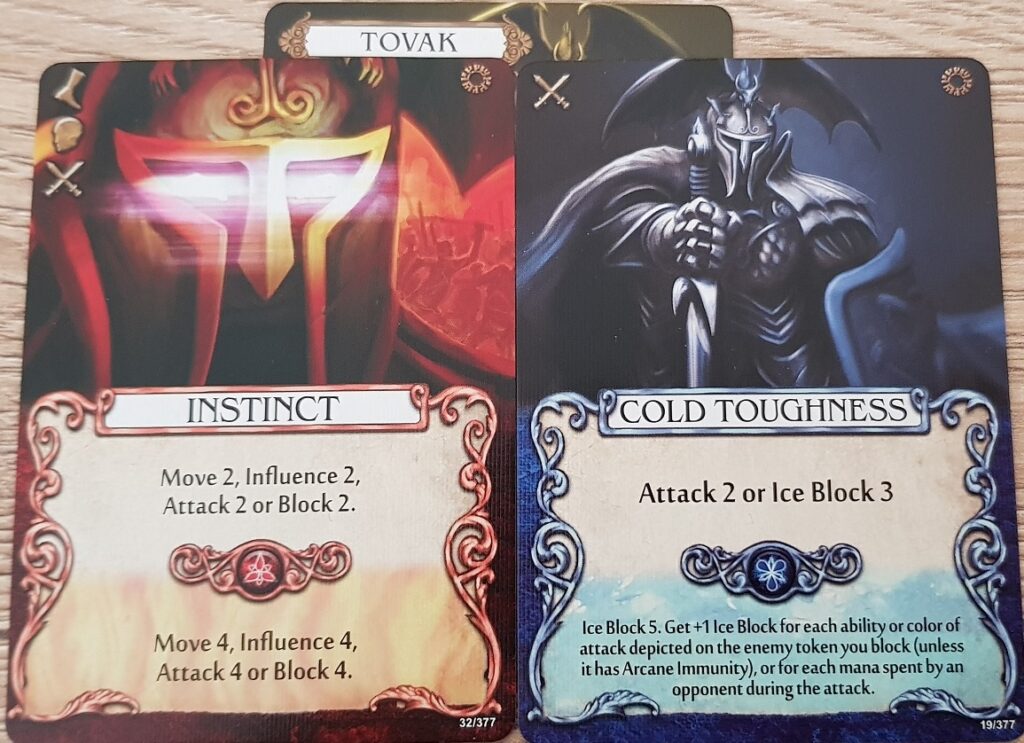 Improvisation -> Instinct: Slightly weaker numbers-wise, but you don’t have to discard another card to use it, which makes it more versatile (you can use the second card as you wish).

Determination -> Cold Toughness: A powerful Block card. Combine it with the above card, you can produce high block values with ease, making Tovak an ideal hero for new players. 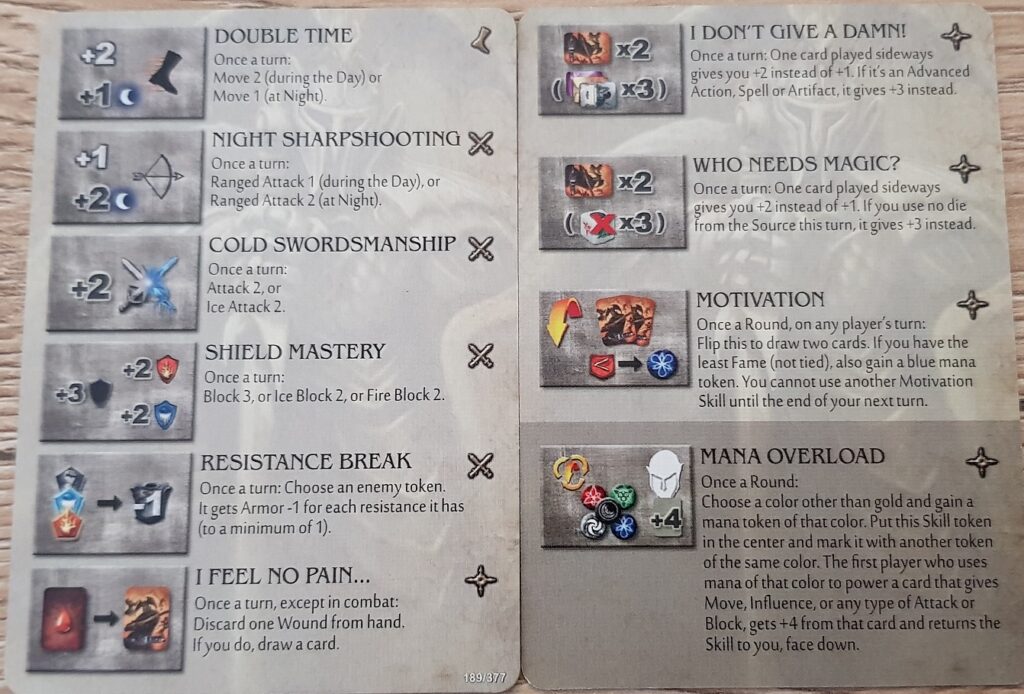 Tovak’s skills are straightforward. They give directly applicable effects: extra Move, Ranged Attack, Attack, or Block points. Breaking resistance, drawing extra cards, and getting +2 or +3 for sideways cards are easy to understand as well.

It’s worth mentioning that most of those skills can be used every turn, making Tovak an easy-to-play brawler, capable of dealing with enemies on his own. 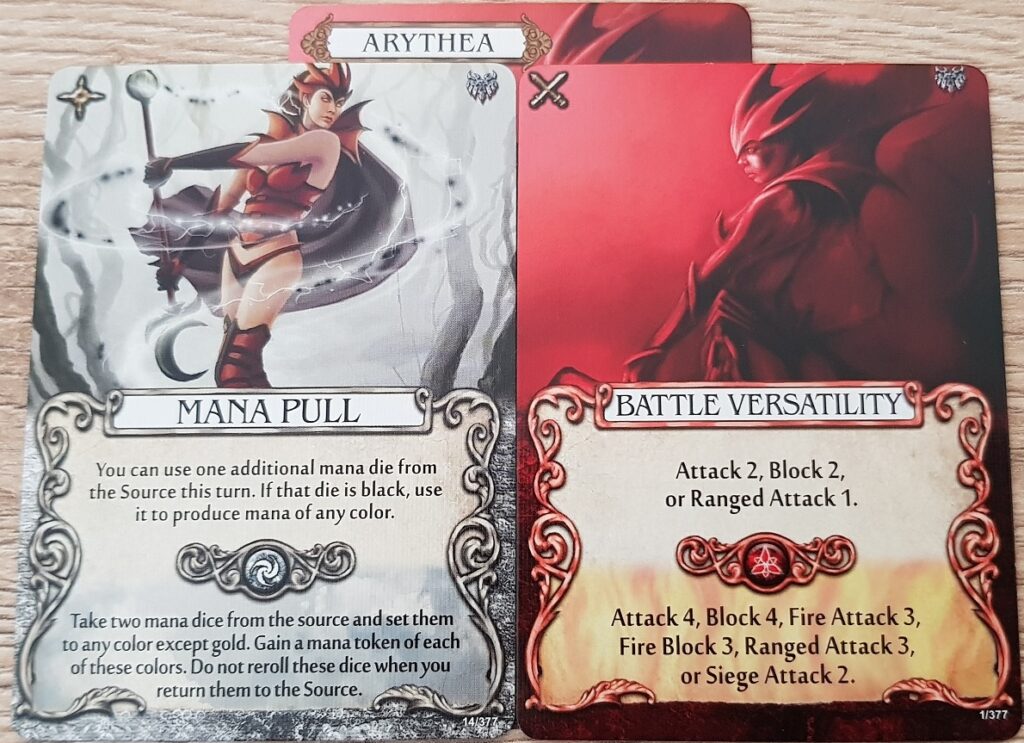 Mana Draw -> Mana Pull: Makes it very easy to gain mana from the source. You can even use black die as any color. And with the stronger effect, you gain two mana of any color. As you can always use one die per turn, this means you can take a total of three dice from the source on that turn. In solo mode, that’s the entire source!

Rage -> Battle Versatility: Very useful in combat. Use the stronger effect and you get all sorts of special attacks and blocks. 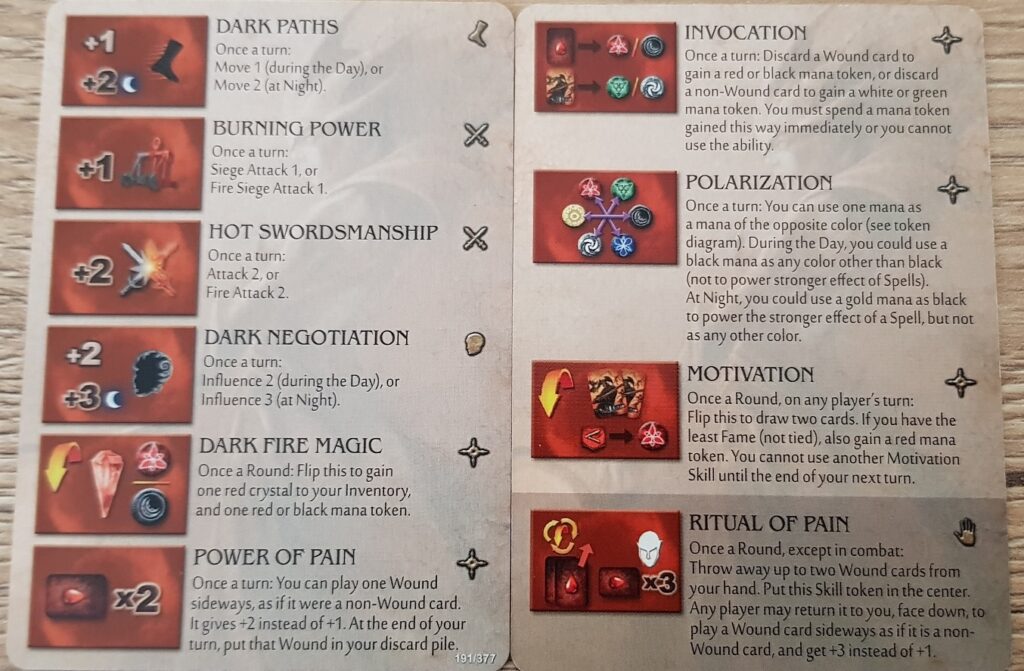 Arythea has a well-rounded repertoire of skills. From once-a-turn Move, Attack, Siege Attack, and Influence points, she can also get mana, draw cards or use mana as opposite mana, making her a very flexible mana handler.

She’s also very good when it comes to dealing with wounds: skills allow her to play them sideways, discard them for mana or throw them away. Don’t be afraid to get wounded, just makes sure you get rid of them before the end, as they bring a negative score. 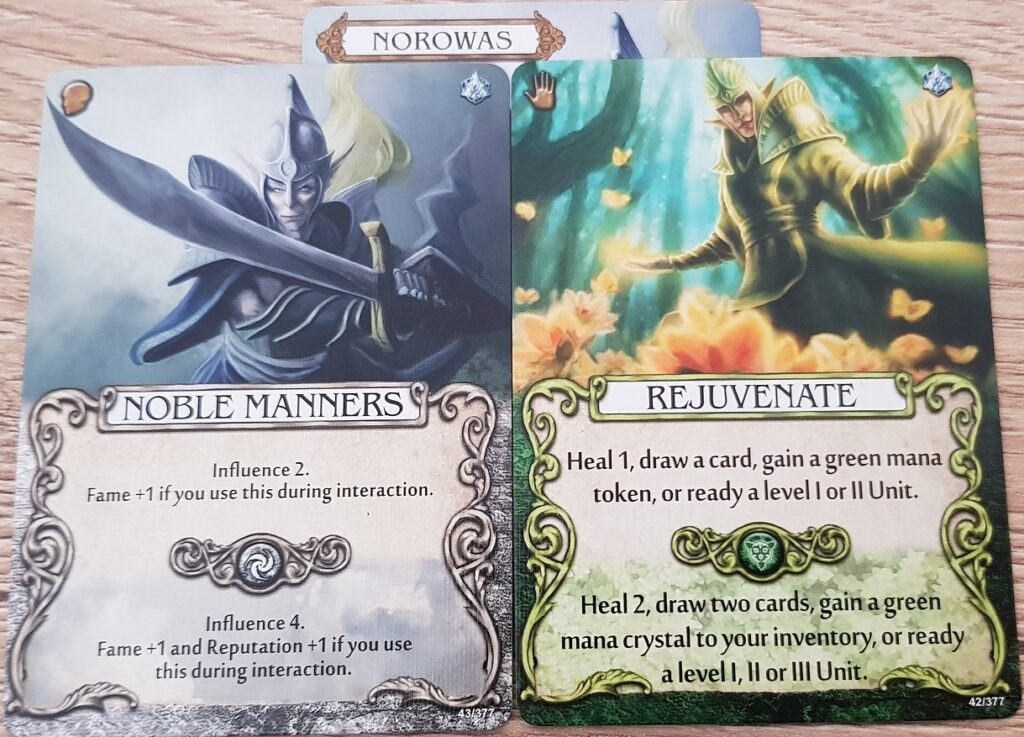 Promise -> Noble Manners: Influence with extra Fame and Reputation, which means Norowas is very good at recruiting units (and other interactions).

Tranquility -> Rejuvenate: Also about units – readying them. It means you can use one of the units twice per Round. 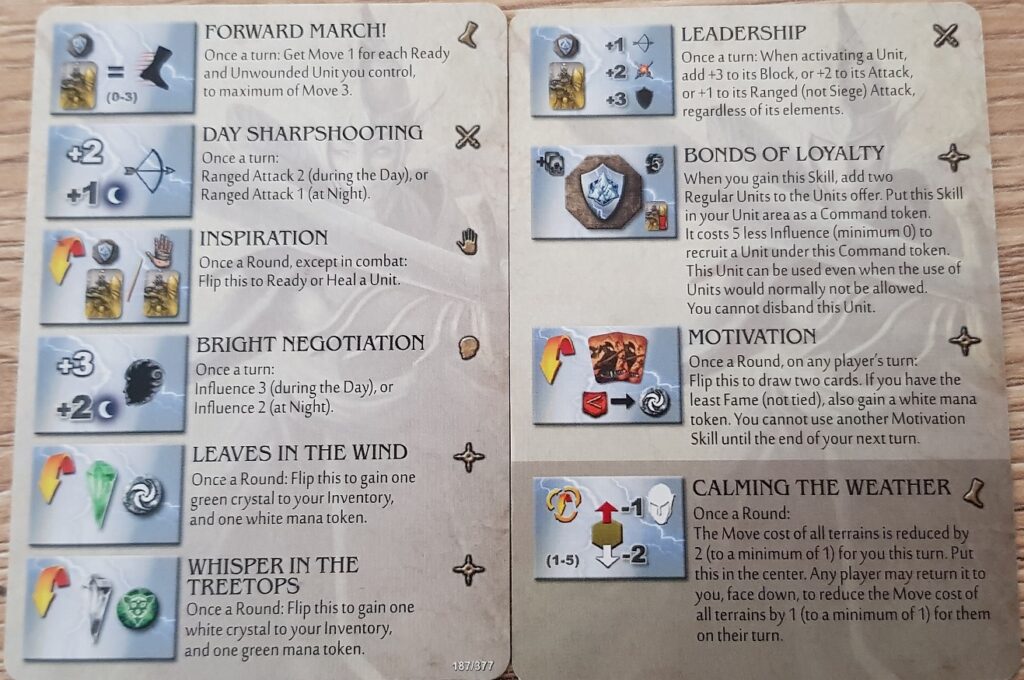 What action cards begin to imply, Norowas’ skills really emphasize: he’s a great leader. Readying units, getting Move points for units, or extra Influence. There’s Leadership which makes one of your units more powerful and Bonds of Loyalty, which allows you to recruit an extra unit much cheaper.

On top of that, there’s Sharpshooting for Ranged Attack, and skills that give you mana or cards are always useful. A very strong character, especially if you’re looking to build an army. 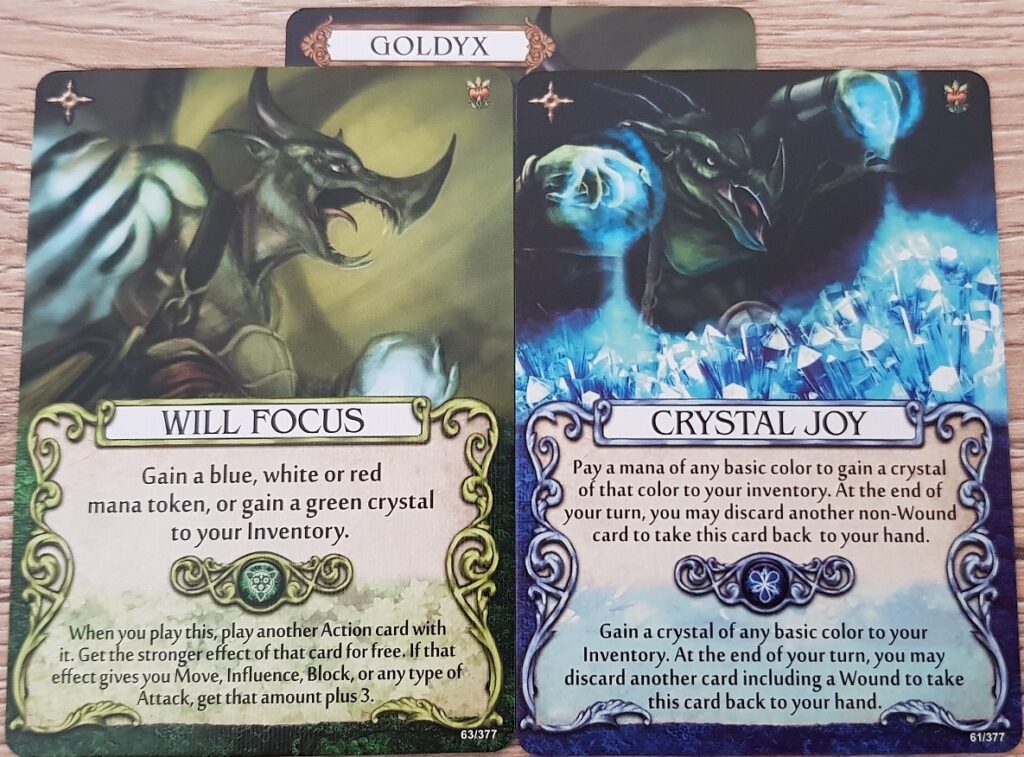 Concentration -> Will Focus: A very versatile card. You can gain mana with it or use the very powerful strong effect, giving +3 on another card.

Crystallize -> Crystal Joy: I have mixed feelings about this card, as is very situational. You can use it to crystallize your mana, and you have the option to keep the card and discard another one instead. It can be useful if you’re healing on a Glade – you can build up your supply of crystals simultaneously.
The stronger effect gives you the option to discard a Wound card instead. Again, useful when healing, but I don’t like the fact that you have to pay mana to get mana. 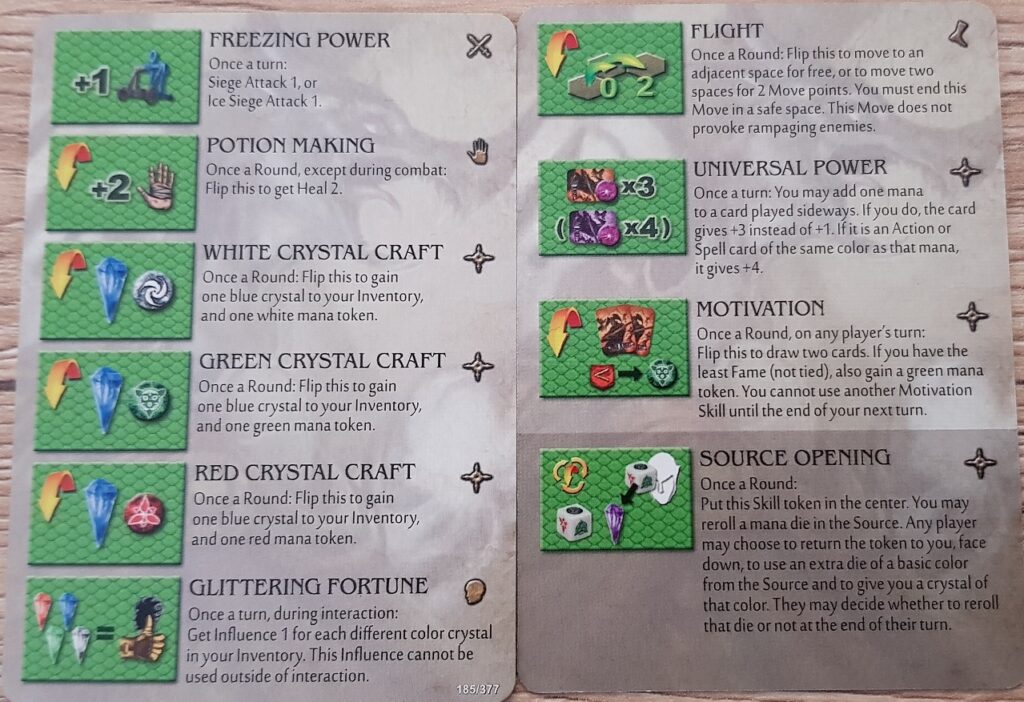 The Dragon is the most unique character of the base game. Contrary to others, his skills are mostly indirect. They can gain a lot of mana. In fact, he’s all about mana – he can gain it easily, but must also spend plenty of it to get decent combat values, as he is very weak himself.

He demands careful planning and mana management from the player and I find him very challenging to play with. To add to the complexity, his action cards both demand a certain sacrifice to be made. 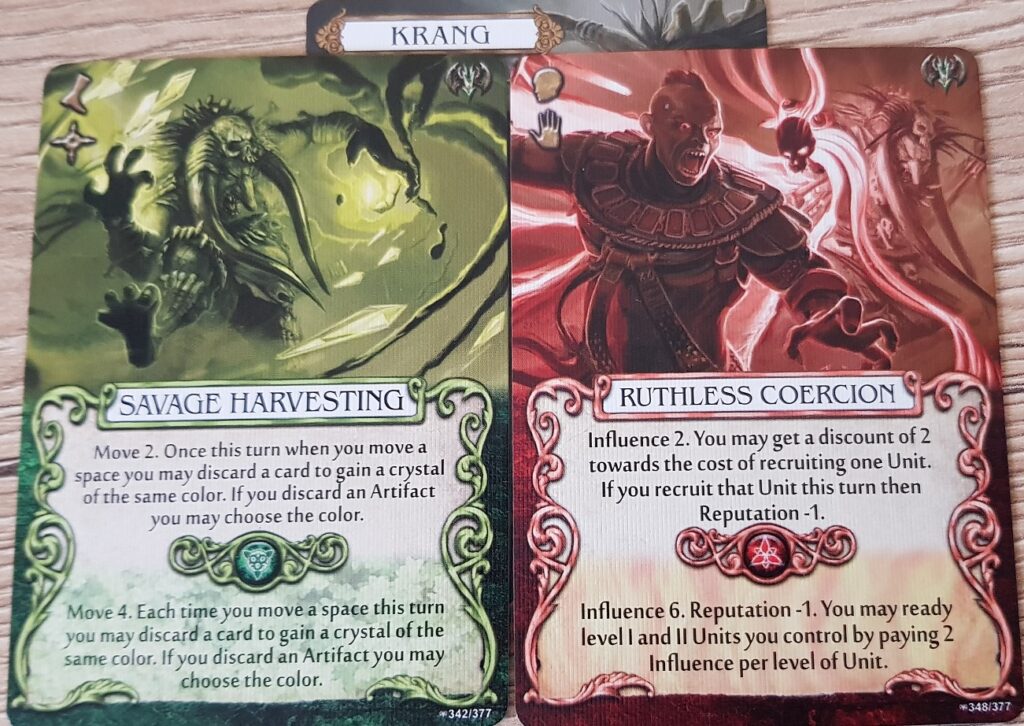 March -> Savage Harvesting: Allows you to move and gain crystals at the same time. Useful, just be careful which cards you discard.

Threaten -> Ruthless Coercion: Very powerful unit management (recruiting and readying) action card. It comes with a loss of reputation, but what you get in return is worth it. 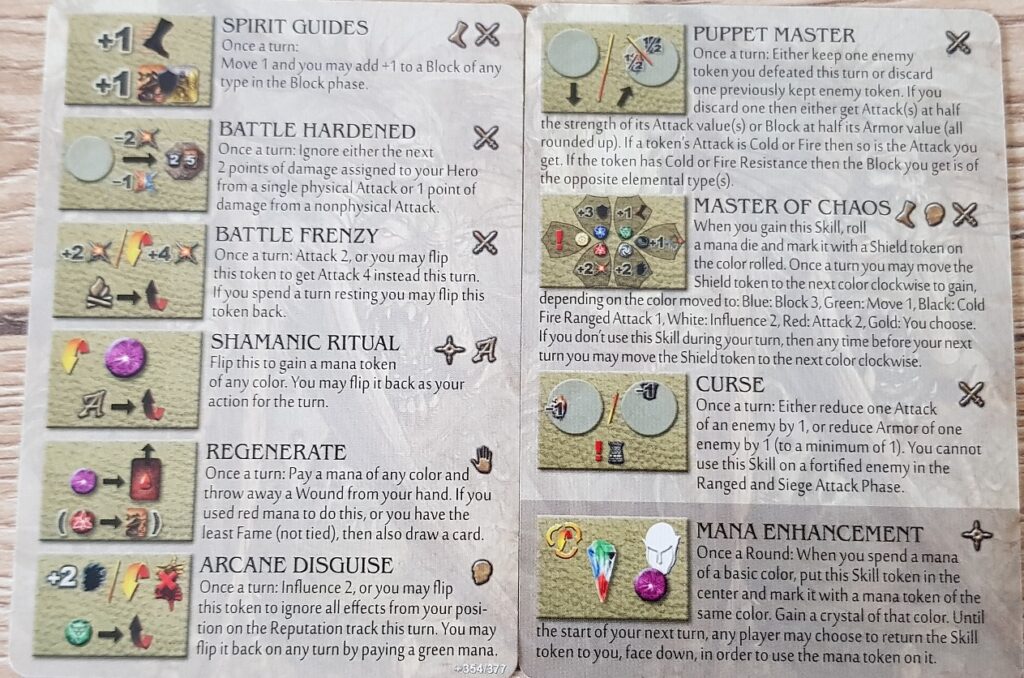 Orc Shaman’s skills are all over the place. You can get Move, Block, Attack, and Influence points, as well as mana. Many skills have the option to be reused (flipped back up again) after a rest or paying mana.

Some of his skills apply directly to the enemies: ignoring 2 attack points, reducing their attack or armor, or even using defeated enemies as your own.

Then there’s Master of Chaos, with various die-dependent bonuses. A very versatile character, but also good at handling units. Krang is very fun to play. 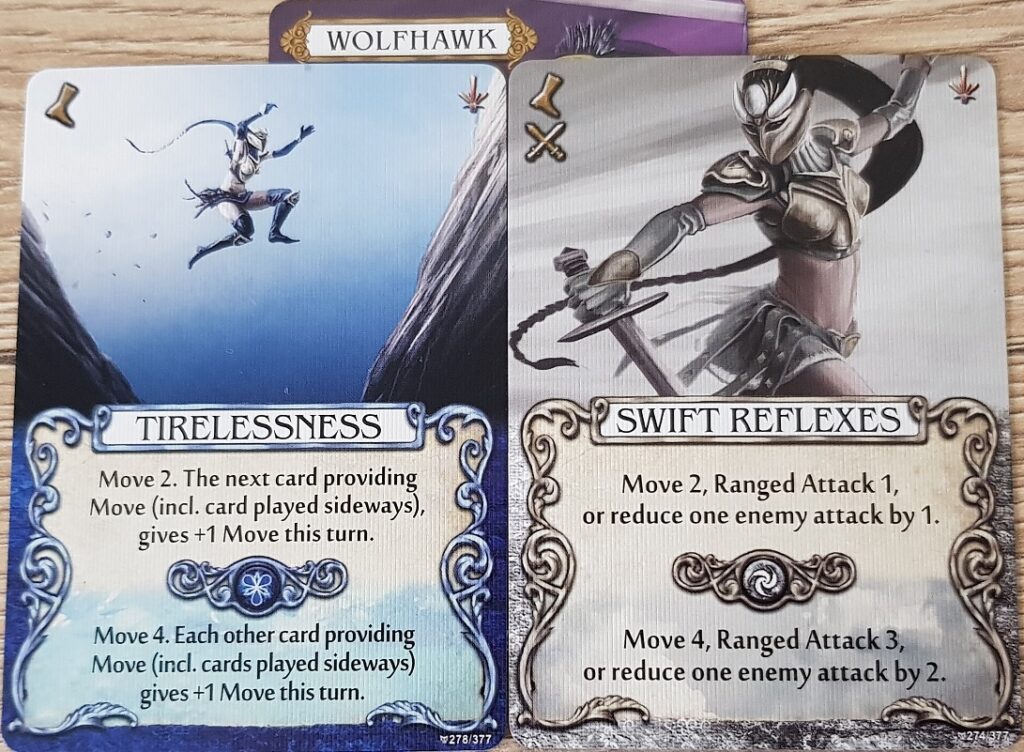 Stamina -> Tirelessness: Great for moving long distances or across difficult terrain as it gives bonuses for combining Move cards.

Our Amazon likes to work on herself. That doesn’t mean that units are useless for her, just that she doesn’t get any special skills to help her with them. She can get Influence skill (On He Own), but she gets more out of it if she doesn’t recruit, so investing in spells and advanced actions may be a better way to go.

Getting crystals and a heal always come in handy, as does an extra move point, with bonuses to scouting and exploring. Other skills focus on combat: ignoring enemies’ abilities, reducing their attack values, as well as extra block, attack, and siege attack points.

All in all, a very peculiar character. A silent assassin with a focus on movement, view range, and reducing enemies’ attack value instead of blocking them. 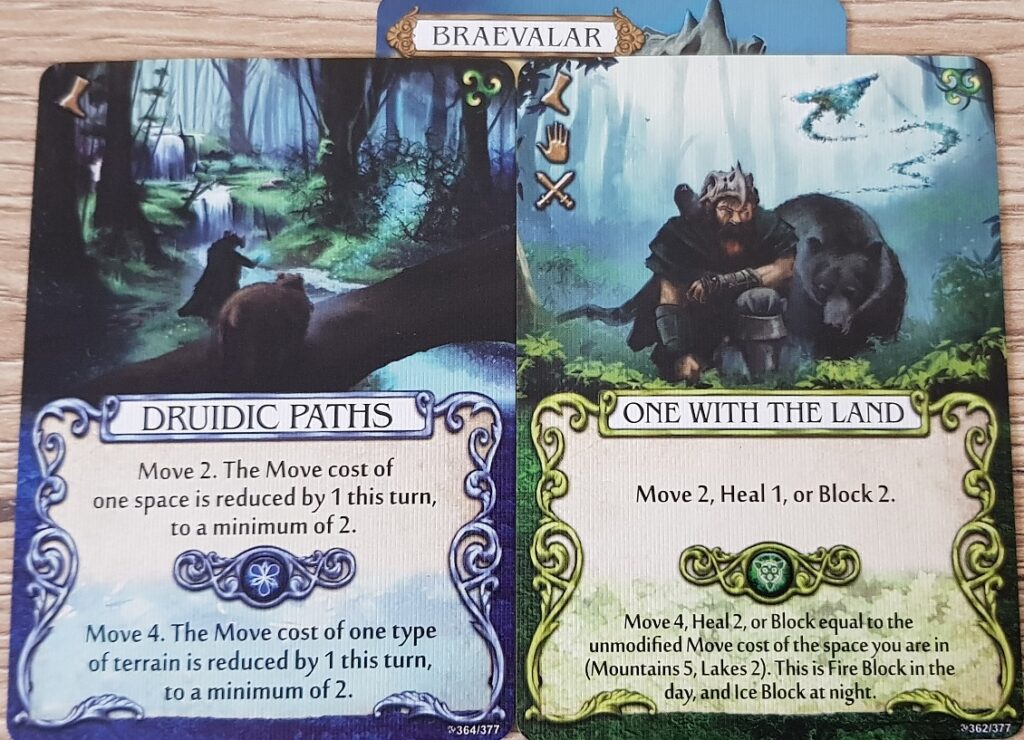 March -> One With the Land: Desired use is for blocking, especially if you are in difficult terrain. Healing is nice too and you can always use it for moving.

Stamina -> Druidic Paths: This makes it easy to move over difficult terrain. 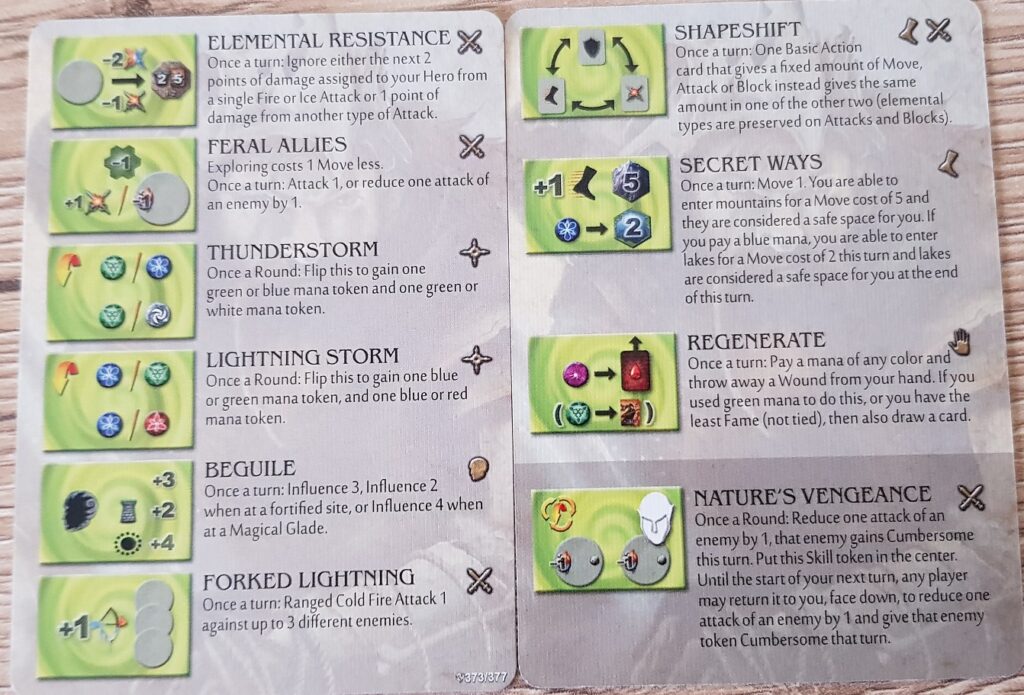 The Druid is all about the terrain and how to use it to his advantage. His skills allow him to travel to mountains and lakes and explore more cheaply. Combine it with March and you can pull off moves like attacking a dragon from mountains.

Other skills include gaining mana tokens (always useful), Influence points or attack points, and reducing or ignoring the enemy’s attack. Forked Lightning is very useful when assaulting cities and he can throw away a wound card with Regenerate or gain flexibility with Shapeshift.

Read about the Dragons in Mage Knight

Keep in mind that their skills are only a part of developing your hero. There is a common skill pool (unused skills from other characters), which you can take instead – to specialize a mage knight to your liking. As a general rule, try to pick skills, that will be useful as often as possible, not a skill that is only powerful for a certain situation (unless you’re sure that it will come up). Skills that give mana tokens or crystals are always welcomed.

Then there are advanced actions, spells, artifacts, and units. You can pick which one to take, but their draw is random, making sure no two builds of the same character (decks) will be the same. Pick those in line with your skills – for example take a red spell if you have a skill that gives you red mana.

Try to experiment. Don’t always do the same thing or take the same cards/skills. Have fun, it’s (just) a game, after all.

For further reading about Mage Knight, check out my articles on unboxing, solo conquest, and the aforementioned review.