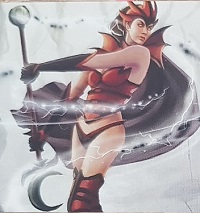 This article discusses the reasons that make Mage Knight such a good board game. I believe three such reasons are the main contributors.

Why Is Mage Knight So Good?

I believe Mage Knight is so good because of three reasons: how thematic the game mechanics are, the carefully paced character progression with numerous options, and the puzzle-like approach to every hand. The combination of these three allows for some powerful move combos, that are great fun to produce.

I haven’t written about Mage Knight in a while. But it wasn’t that I was not enjoying it or stopped playing. I just felt there was nothing useful to add. Until recently, when I played a fan-made solo scenario I found on BGG, which had some interesting twists in it, that made me realize what a gem Mage Knight is. I began thinking about what makes Mage Knight such a good board game and I concluded it’s a combination of three factors.

The map gives a lot of freedom on what to do and where to go. Yes, usually, there’s a clear end goal (conquer this city, defeat Volkare, or a similar boss battle) and a somewhat clear path to it. But, depending on your hand, you’ll always have several equally compelling options. Try to capture the keep (easier) or the tower (harder, but more rewarding)? Spend your influence at the keep to recruit a unit, or move to a nearby monastery and buy an advanced action instead? Burn that monastery afterward or play the nice guy?

When in villages, do you loot them to draw extra cards or do you save your reputation? Do you go out of your way to kill a lone dragon, to repair some of that reputation, or would that mean losing too much momentum (how effectively you use your deck towards the end goal) and actually moving you farther away from your end goal? There’s no right or wrong answer. You are in command of your character, you make the decisions, and you will reap the rewards (or suffer the consequences).

While there’s not any narrative per se, the theme oozes through these game mechanics – you really feel like you are a mighty Mage Knight roaming through the countryside, playing the hero, and making the populace safe from orks. You’ll visit a monastery, learn a new craft there, and recruit monks to fight for you. And then they’ll refuse to participate because you’ve decided you’d like their former monastery in ruins instead.

When you interact with a village, and particularly, conquer a keep, tower, or city, it will feel rightfully yours. You’re at home chilling and reaping the rewards of your conquests (unit recruitment, influence, and hand-size bonuses).

The day-night cycle is another thing that makes the game feel alive. It emphasizes the passing of time and your progression (both on the map and in character development). You’ll start to measure time in game rounds, not hours (these will fly by anyway). It also changes the way mana, movement, and tactics work – enough to make a difference, but not enough that it would be confusing. It’s also cool that Mage Knights don’t need to sleep. 🙂

Slow deck building is something I wasn’t too appreciative of from the beginning, but the more I play, the more I see the brilliance behind it. There are only six rounds in the normal game of Mage Knight. Since the cards go on top of your draw deck, six is the maximum number of times a card can come up during the game (wel, this is not entirely true, since some abilities allow you to break this rule and pull a card back out of discard). Choosing your next card will often be a decision about the immediate bonus or something that will be more powerful in later rounds.

This makes you pick new cards carefully. It’s not like Clank! where you’ll be buying new cards every turn, with the limiting factor being that you don’t bloat your deck too much. No, in Mage Knight, adding a new card to your deck is more akin to a sacred ritual. The cards you add will be hard-earned and thus special – they’ll be carefully selected and will make a big impact every time they come into your hand.

Although it may seem there’s a large offer (advanced actions, spells, units, and artifacts (+skills)) on the table at any given moment, the selection will often not be exactly what you want, so you must also improvise in which way your character will develop. This will create interesting combos.

I’ve played with Tovak (which is normally developed into a tank that can block and inflict a lot of damage himself) recently and was forced to acquire more-than-I’d-prefer-number of green and white advanced actions and spells. Partially because Goldyx was the dummy player and I couldn’t afford to give him too many green cards/crystals, and partly because nothing else was available in the offer.

This resulted in a very interesting character build. One that could buy advanced actions and heals at monasteries almost for free, recruit the strongest units, and be able to heal them and himself. The only thing missing was the ability to convert this influence into something more useful in later battles (i.e. block with Diplomacy advanced action), but unfortunately, nothing of that sort became available.

To summarize, each character’s build feels different. But it’s more like the game has battered your mage knight into something that they have developed, instead of you building them for it. It feels like a mage knight is a result of their actions, rather than actions being a result of your build. This way it feels more genuine and natural if you can understand my point.

Each hand is a puzzle in itself

There are a lot of connections and different ways you can use the cards, combined with mana, skills, your units, and options on the map – as well as the overall big picture of the game (your momentum).

While there’s an element of randomness involved (mana dice, card draw), once it’s your turn, the situation is static. This gives you a lot of maneuvering space to work with and allows for different solutions to come up with. It also makes way for genius combos to emerge, the combos you feel like you’re outright cheating. The combos where you feel like a mighty Mage Knight, destroying a powerful city in one turn.

And these combos are not something that would repeat every game – no, because of variety and ever-changing conditions, there will be a new one to discover every game.

Powerful, game-breaking combos at their best

In this game you’ll fly over a lake, saving you a long trip around, the next game you’ll block the most dangerous enemy by just scaring the hell out of them (fear banner), while also using a spell to reduce its fortification and a skill that takes its resistances and turns them into armor reduction, making a once-formidable foe into a pushover. Not so tough now, are you, Altem Guardians?

Or a legendary dragon, which would have meant an insurmountable obstacle just a few rounds ago, is now dead with just a few well-aimed ranged shots. (which brings us back to point 1 – theme by mechanics).

Such solutions aren’t easy to find, and the more game-breaking they are, the more awesome they feel when you pull them off. I walked away from the game many times refusing to believe I can’t beat the next battle, only to come back with a fresh mindset later, discovering I missed a combo, that gives those very needed few points of block, making a fight that would leave me with a hand full of wounds, into a flawless victory.

While analysis paralysis is normally an unwanted phenomenon in board games, Mage Knight thrives on it. This is why it’s such a good single-player board game – if not the best.

Those were the main reason I believe the Mage Knight is such a good board game. I’ve already played a lot of it, but when I see how much more there is to discover, I realize I’ve still only scratched the surface. Expect Mage Knight articles on Victory Condition to come sporadically for many more years.