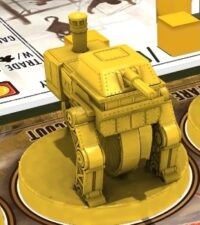 In this article: read the review of  Scythe – a board game, set in an alternate reality Eastern Europe with giant mechs controlling the rural land.

How does it play? Is it any good? What about expansions and digital editions? All that in my Scythe board game review.

Scythe is set in an alternate reality in Eastern Europe, just after The Great War.

People are trying to recover and rebuild, but peace is not yet destined to happen. Cold war looms over the region as factions fight over land and resources with war leftovers – giant mechs stomping the rural land.

Scythe was created by Jamey Stegmaier in 2016 after a very successful Kickstarter campaign. It is based on the world and art built by Jakub Rozalski. Theme, setting, and artwork are some of the stars of the game, as Rozalski’s artistic style shines in all elements of the game: the board, cards, mechs, and miniatures.

Introduction  to Scythe – Board Game Review

What is in the Box?

Scythe is a complex game with a large repertoire of resources, coins, tokens, structures, cards, and miniatures. In total, there are several hundred individual pieces in the box, many are faction specific. 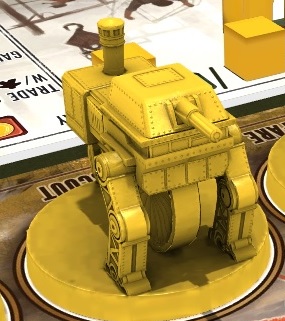 There are 5 factions in the base game, each of them with a uniquely designed main character, workers, and mechs: Rusviet Union, Crimean Khanate, Nordic Kingdom, Polania Republic, and Saxony Empire. Every faction has a special ability (or two) which makes them all unique to play.

You can read more about the factions and their faction-specific strategies here.

Setting up the Game

Each player receives a randomly selected faction mat which starts in a predefined location on the game board. Faction mats determine factions’ special abilities, their starting power, and starting combat cards.

Variety is added with (also randomly selected) player mats which tell you what actions (like building, producing, trading, and moving) and at what cost you will have during the game. They also set your starting coins, popularity, objective cards, and starting order. Although you can do all four actions with all the mats, some provide bonuses for certain actions.

Your main character miniature is placed on the starting point on the board with your two workers on the tiles adjacent. 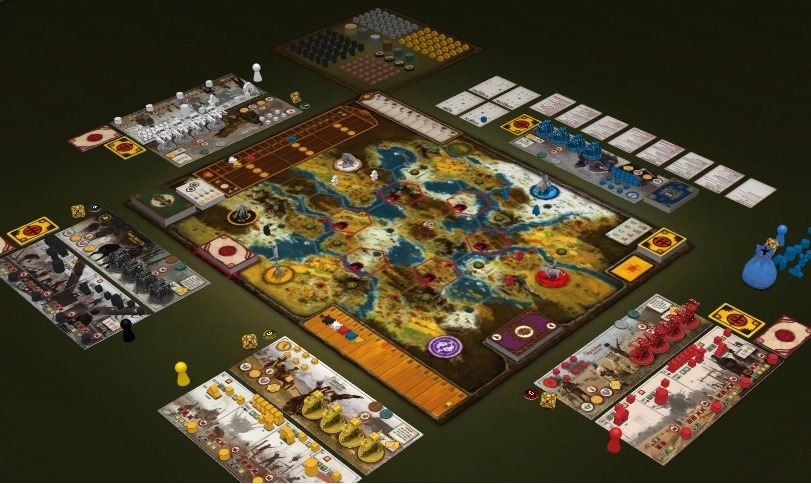 How to play Scythe?

On his turn, a player chooses one of four action sections on his player mat. This will be his action for the turn. Each action has two rows: top and bottom, with the top one being performed first.

Top actions are cheap and basic (like moving and producing), but bottom actions are more advanced and require more resources to perform. You can (and you should plan your moves that you’ll be able to) perform both rows (if you can afford the bottom row), just one, or neither.

Indeed, during the early turns, you will mostly be moving and producing resources. Moving can be further upgraded several times.

Producing is tightly bound to how many workers you have (you can increase that by “producing” more workers in villages) and the produced resources stay on the board until they are spent. That means that you have to protect them since they can be captured by other players. There are five (tile-specific) different resources: food, wood, metal, oil, and workers.

(This concept of resources staying on the board and being potentially available to everyone is also one of the main features of Brass: Birmingham.)

After you have acquired enough resources, you can start building up your faction by:

When the first player is completing the bottom row action, the next player can already start planning his top row action, keeping the gameplay smooth.

There is player-versus-player combat involved, but it is usually best to stay out of it (unless you can guarantee a win) since even a single defeat can be very costly.

The meeples you had on the losing tile are sent back to your starting location and any resources are captured by the victor. In a tight game, such a setback can quickly seal your fate.

Players tend to keep to themselves (and in true cold-war fashion form informal alliances) and focus on building up their faction.

But sooner or later (especially when contesting the lucrative Factory tile at the center of the map with its extra bonuses) the inevitable happens and players collide.

The game uses a very clever combat system, eliminating the luck factor. Each player decides in secrecy how much of his power will he use (that can be further increased with combat cards for each mech or character involved). Use too little and you will lose the fight, use too much and you will be left very vulnerable to other players in subsequent turns.

Random Encounters of the Eastern-European Kind

The only element of luck (besides starting mats) in Scythe is presented through encounter cards, which you capture by exploring marked tiles on the board. These cards are a work of art by themselves, each picturing a unique scenario: you run upon forest workers, into a festival, a lonely farmer.

Under the picture you have 3 choices on how to react, each giving or taking something from you (i.e. steal the wood from workers to gain resources and lose popularity). The positives outweigh the negatives (if you choose wisely).

That means encounter cards give you free stuff and encourage you to explore and upgrade your movement abilities. Moreover, encounter cards help you immerse into the theme.

As you can see, all this combined makes a very deep and complex game, full of choices, different things to do, and ways to interact with the board.

Being Popular Gets You Money, Money Wins Games

We’ve seen how the game is played, now let’s look at where this all is leading. The goal of the game is to be the wealthiest faction in Eastern Europe.

You can start accumulating wealth during the game, but most of it will fall to your hands after the game has ended and scores have been calculated.

At the game setup, each player received 6 stars, which are a tool to keep track of special achievements:

If you’re interested to see how things work out in practice, check out my article on Strategy and tips for getting better at Scythe.

Every time a player completes one of these achievements, he places a star on a special table, and when the first player places six stars, gameplay ends immediately.

But that does not mean, that this player is also the winner (although he gets more coins for his stars, thus making him one of the favorites), it only means that the scoring can now begin.

Games are usually tight, so it’s not going to be like one player having 5 stars up and the other having none.

More often than not, you are trying to frantically maximize your points by expanding and boosting your popularity as players try to reach for that final star. That leads to some very tight and tense end play.

Now we can start counting the money:

Popularity kicks in – it works as a multiplier for stars, tiles, and resources and it can yield a lot of coins. It makes sense I guess – after all, to be a winner, you’ve got to earn the love of the masses.

Scythe is not a family-friendly pick-up-and-play game (unless your family is full of geeks – in that case, congratulations). Its target audience is more advanced board gamers, gamers that will take their time to explore the differences between the factions and how to exploit them best.

With all the things in the box, it’s no surprise that the price is also a bit higher, even though the creators tried to keep it down with cardboard tokens and plastic miniatures. Metal ones can be ordered as an upgrade, as well as the larger board.

Game mechanics and rules can be overwhelming at the beginning, but I found them very intuitive and easy to understand after a game or two. Some practice is required and one of the best ways to practice is through the Digital Edition.

If you have a group of friends, that you play together regularly, this is a great addition to your library. With a special Automa ruleset (included in the base game), you can even play single-player and enjoy it on your own.

6 thoughts on “Scythe – Board Game Review”