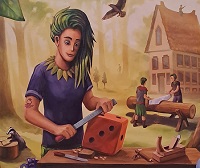 Is Woodcraft, the 2022 board game from Delicious Games worth your attention? Is the dice manipulation enjoyable? Should you buy it?

Since 2018, Delicious Games have published roughly 1 big game per year and so far, all of them have been received with positive reviews. Underwater Cities featured imaginative worker placement + card play mechanics, while Praga Caput Regni introduced the action selection wheel that tied several tracks and mechanisms into a coherent game. It was challenging but highly thematic and enjoyable.

Messina 1347 returned to worker placement, supported by several tracks and action selection routes. But the main thing everyone remembered about Messina was its immersive theme – the plagued city, saving infected citizens and placing them in quarantine, and then repopulating the city with healthy inhabitants.

Woodcraft is their 2022 title codesigned by Vladimir Suchy and Ross Arnold. You’re in charge of a workshop, crafting various wooden items. The game sports cute art, but its main trumps are the clever dice manipulation mechanics. The lumber needed to craft items is represented by dice and the items need various combinations of them to be produced.

The action selection wheel makes another appearance and it is what drives the game. In a nutshell, you’ll be splitting and adding together dice pips to satisfy demands on contract cards. Assisting you will be various helpers, tools, sawblades, scrap wood, glue, lamps, and blueberries. You can even plant your own trees. Or just buy the wood on the market.

Sounds quite ambitious and it is. Woodcraft tries to combine many elements into one box. Let’s see how they work with one another and if the end result is an enjoyable game.

When it comes to appearance, Woodcraft is all right. The color palette is based on brown and the components are your typical eurogame cardboard with wooden tokens. The cards are a bit on the thin side and hard to pick up, especially on a hard surface. The action wheel is a bit clumsy – I liked the one in Praga better.

The artwork, particularly the wood-crafted items on the order cards look really nice, as do your helpers. But despite the good looks, the theming doesn’t feel completely thought through.

Obviously, we have a workshop in the forest, we’re crafting wooden items and we apparently really love our job. But who are we making these items for? Who are our helpers and why is their hair green? Are they dolls, gnomes, or hippies? Why are they using giant blueberries as money? And why are victory points hazelnuts?

I realize we’re playing a eurogame where the theme is usually secondary, but you can’t just throw cute art with random stuff onto a pile and call it a theme. The competition these days is too tough for such an ad hoc approach. 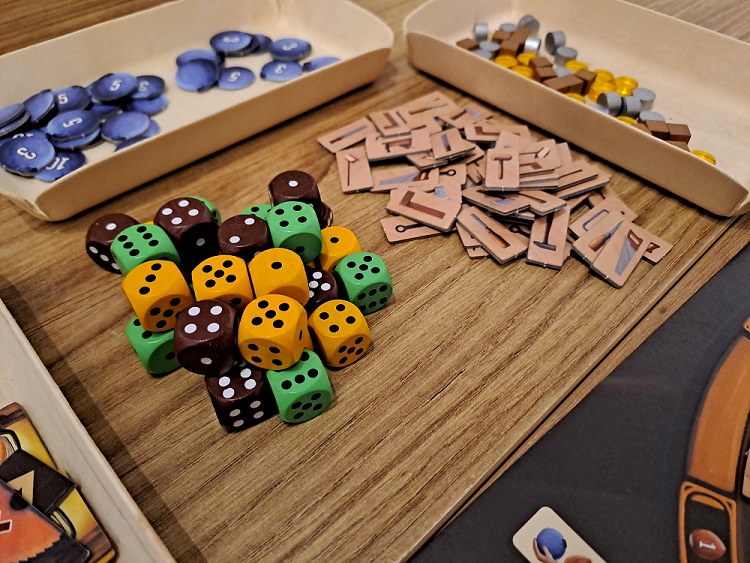 Woodcraft is moderately difficult to learn. The rulebook is well structured and written, covering all the rules at the right time, so that referencing and finding rules during gameplay is not too hard. The general flow of the game (rounds, action tiles, free actions) is relatively easy to grasp, too.

I had most difficulties with tying the actions together, as they proved unintuitive and overly complex (make sure to read the rules carefully!). Even dice manipulation mechanics that make the most thematic sense are hard to get your head around at first. So my main negative here is not the rulebook or the actual rules, it’s about the learning curve of actually playing the game competently.

It takes too many games to grasp the game flow and play it smoothly. There are so many moving parts that there’s always something slowing you down or something you haven’t considered.

The game is played over 14 rounds (13 rounds in a 4-player game) and in each round you pick one action tile from the wheel. Before you do that, your trees grow (you increase a die by two pips), if you have any. After your turn, you have the chance to buy victory points with blueberries.

I won’t explain the wheel (or the circular sawblade, as it’s depicted) in detail – the only thing you need to know is that it makes actions that haven’t been used for a while more appealing by attaching various bonuses to them.

There are seven main actions:

Anytime on your turn, you can perform several free actions: use helpers, manipulate dice by sawing, splicing, and gluing lumber, or complete contracts. If you have three lanterns you can buy one of the main actions and perform it for free. 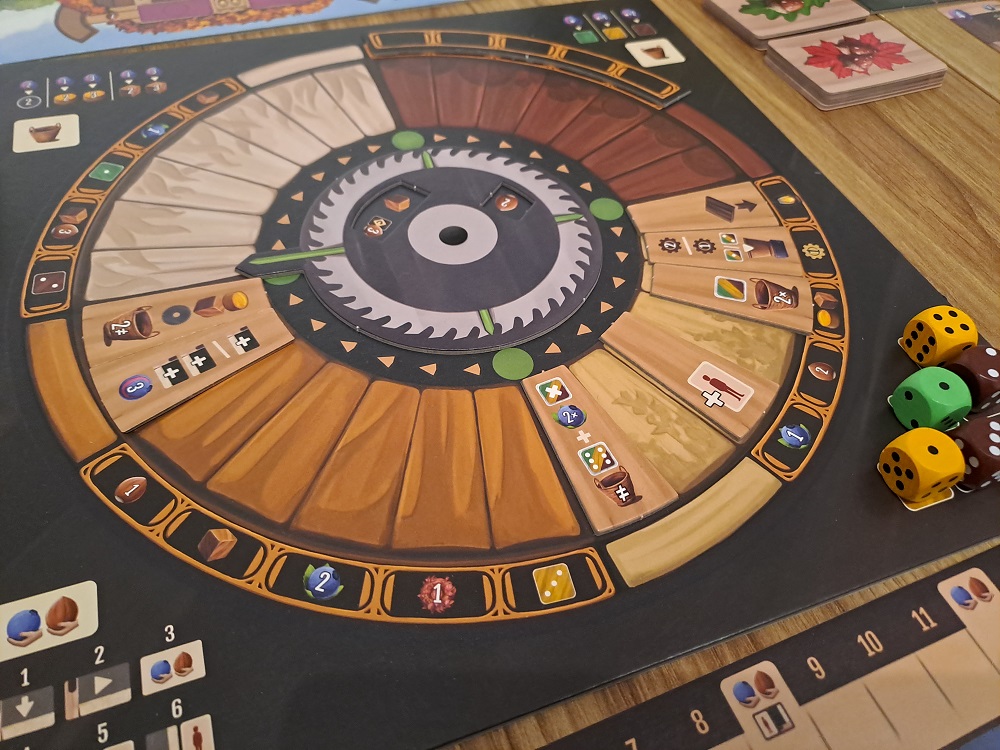 The devil is in the details

Everything so far sounds pretty straightforward, but of course, there’s more under the surface. On the action wheel, you have to take into account the bonuses you’re offered, as well as bonuses you’ll offer to other players if you take a certain action. There are three colors of lumber available. And when buying lumber, you need to have sufficient funds – blueberries.

These are always in scarcity, as you’ll need them for hiring helpers, improving your workshop, buying secondary materials, or buying points. Helpers offer various bonuses, ranging from one-time actions (i.e. a free action of improving your workshop) to permanent bonuses (i.e. discounts when buying dice). Moreover, they increase your money and points income, as well as give out resources on production.

Yes, there are income rounds after every few turns, as well as production phases that you can initiate yourself. On top of that, there are tools, which you can receive as special awards for certain contracts. You can then place these tools into the attic, which is an entire minigame in itself. Clever placement of tools can unlock many bonuses.

When it comes to free actions, things are not simple either. Each sawmill allows you to cut one die. The first cut is free, while cuts after that require a sawblade each. You can, of course, purchase sawmills and sawblades for money. It’s similar to splicing and gluing dice. Moreover, you can perform each action only once until the whole income phase. Unless you have a token that allows you to refresh it for free … 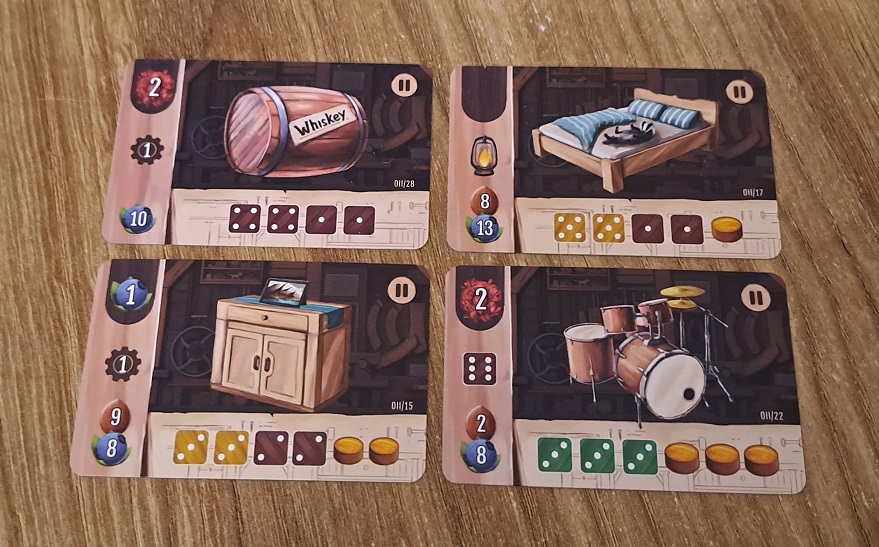 If this all sounds complicated, it’s because it is. Woodcraft is not an easy game to play, both complexity and difficulty-wise. It takes many plays to take it all in and even after several games, I don’t feel as if I’ve grasped enough of it to start exploring the various strategies.

The system is promising though. Dice manipulation offers many options and is fun and reasonably thematic. When played right, things will fall into place and you can stack bonuses and chain powerful actions. This can be highly satisfying.

But it takes a lot of effort to reach this level and the games until then will be very punishing. The game is extremely tight with resources and actions and unless you know exactly what you’re doing, playing won’t be rewarding. I’m afraid many players will quit playing in this process.

Even after you are past the learning stage, not all is perfect. Yes, the dice manipulation is superb. Growing, buying, sawing, and gluing dice offers such an appealing and satisfying puzzle and it’s a joy to solve over and over again. But even when you get better at the game, the tightness still remains, particularly since the hard-capped number of main actions is so painful.

Just as your engine starts to roll, the game draws to a close. It’s the same for all the players, but that just means all players will end the game unsatisfied. It ends just when we started to enjoy it. Both Messina and especially Praga felt similar, but Woodcraft is on another level.

The second issue is the random card draw, particularly the initial contract and helpers. A useful initial helper can have a huge compounding effect on the rest of the game and you want the initial contracts to have some tools as rewards so you can start filling your attic and reap the bonuses in it.

The cards that come out later are not as crucially important, but they are significant, as well. Especially if a contract comes out for which you just happen to have a few leftover dice ready.

In Woodcraft, each player is more or less minding their own business. There’s competition on the action wheel, as well as on the contract and helper offer board. But all these come through only after repeated plays when the players know what they’re doing.

As there are a lot of options on their turn, analysis paralysis will often slow the game down, as the player thinks and contemplates. Therefore, the downtime can be significant, particularly as there’s not much you can do in the meantime.

Low player interaction, the aforementioned long learning process, and a lot of room for long AP turns indicate this to be a game that you play with only selected players. And I wouldn’t want to play in a large group, either. Two, maybe three players in a game sounds about right.

One of the best ways to play the game is the solo mode. It’s a beat-your-own-score, but there’s a deck of cards that helps move the action wheel around. The system is very good and you can experience the majority of what the game has to offer this way. Given the game’s nature, this will be the preferred mode for many gamers.

However, the beat-your-score system is highly susceptible to the luck of the card draw and your results may not be entirely comparable to one another.

A Feast of Odin has an outstanding beat-your-score solo mode.

Conclusion – Should You Buy Woodcraft?

Woodcraft is not a game for everyone. It’s definitely not for a group of occasional players that like to switch titles around and play something else each session. You have to endure a lot of complexity before the shapes of a game emerge.

But if the name Vladimir Schy means anything to you, it’s worth taking a look at. It’s definitely the most complex game from Delicious Games. If you’re a fan of their previous titles, particularly Praga Caput Regni, and if that game was not complex enough for you, then you’ll probably enjoy Woodcraft. But if you’re not, you can skip this title without regrets.

>>> Woodcraft is available on Amazon <<< 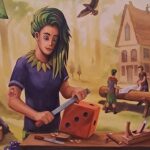