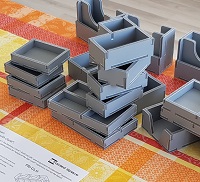 In this Folded Space Inserts Review, read about reasons to buy, assembly, and direct review of some of the Folded Space products.

What is an insert?

An insert for a board game is a set of 3rd party storage solutions (boxes or similar) that is designed to store the game’s components.

Why do you need an insert for your board game?

There are several reasons why one would want to enhance his board game:

A custom insert increases the value of your game

Folded Space is a Bulgaria-based company that produces inserts for board games. The inserts are made of Evacore memory foam. The foam is precision cut by a machine, which guarantees a high level of accuracy.

The level of engineering with the inserts is extraordinarily high. By that, I mean that the inserts are a perfect fit for the game box. And the boxes for all the components are separated into a logical layout, which makes set-up and tear-down as easy as possible. Usually, the inserts are designed to fit the expansions as well.

The assembly is very straightforward. You just punch the pieces out of their sheets, assemble them together as per instructions and then glue the connecting edges. You can use different sorts of glue – I tried super glue or regular wood glue and both worked perfectly. And even if something goes wrong later, the repair is very simple. You just glue the piece back together and that’s it.

Clans of Caledonia was the first folded space insert that I got. The game components are originally packed in plastic bags. Because there are a lot of different small components, setting up the game is a real pain in the ass and it takes a lot of time. The same goes for storing the game.

The insert comes with options for both original and revised editions – you can build the contract token holders to a slightly different dimension. It’s a pretty clever design feature, I must add.

All of the different components like the resources, coins, tokens, contract tokens, and player pieces go in their separate boxes. During the set up you just take out the boxes and place them on the table. This reduces the setup dramatically. I’d say the insert for Clans of Caledonia is really an essential thing that you need to play the game comfortably. Once I tried it, I wouldn’t play the game without it. 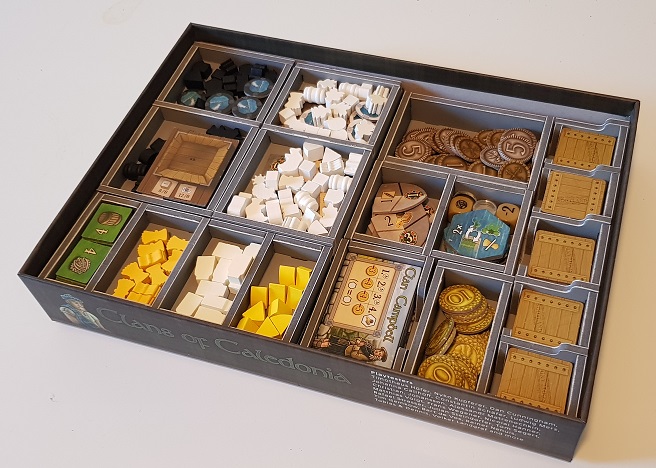 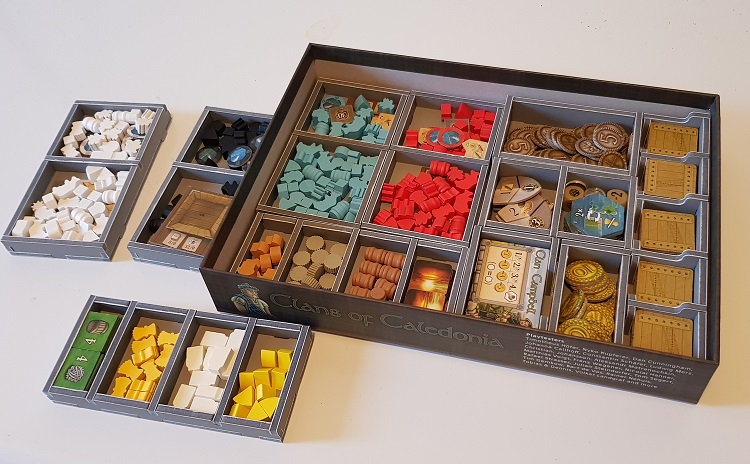 Gaia Project is in a similar situation as Clans of Caledonia. It’s a very complex strategy game with a lot of small components, player pieces, tokens, planets, cards, and other components. The original storage is also just plastic bags which makes the setup a nightmare – even more so than in Clans of Caledonia because the game is even more complex and large-scoped.

The Folded Space insert for Gaia Project is just an excellent upgrade. It has many small boxes, everything has its right place, and it all fits in the box like a glove. I can’t emphasize enough how it makes the gameplay easier. It makes the setup down to a matter of minutes. Without it, I would often rather not play the game at all, than have to set it up. 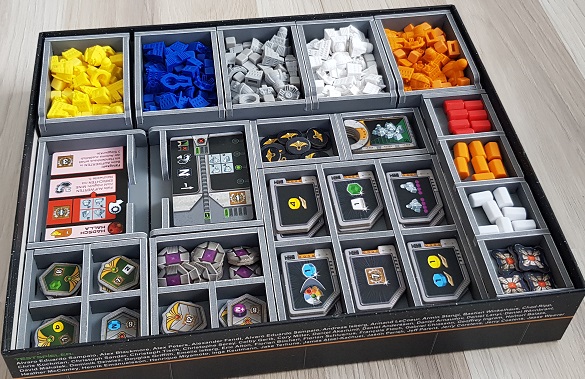 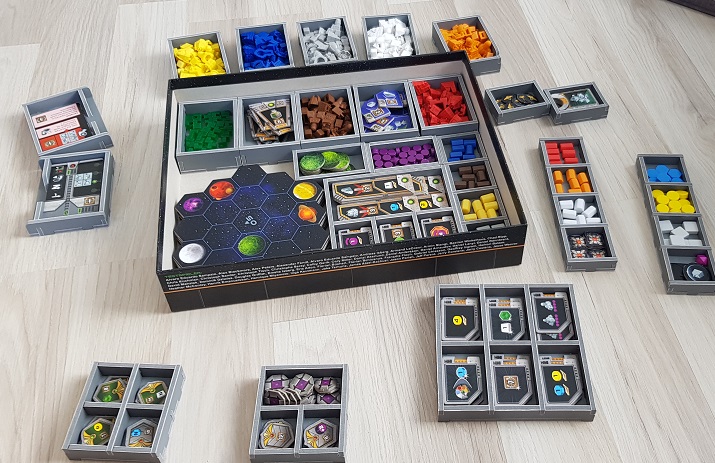 Gloomhaven: Jaws of the Lion

With Gloomhaven: Jaws of the Lion, the situation is slightly different. There is an out-of-the-box plastic insert included that holds many of the small tokens.  While the enemy standees are still packed in plastic bags, the original insert is a pretty solid design.

Read the full Gloomhaven: Jaws of the Lion Review

The Folded Space insert really helps with the enemy standees – they are now much easier to reach and add to the game. When it comes to condition tokens,  damage tokens, coins, treasures, and terrain features, the Folded Space insert is better than the original plastic insert. The cards tray is large enough to accommodate sleeved cards, but you need to make card separators (not included) for easier access.

Verdict: Insert is not a necessary addition to the game – you’ll do just fine without it. But it’s nice to have, anyway. 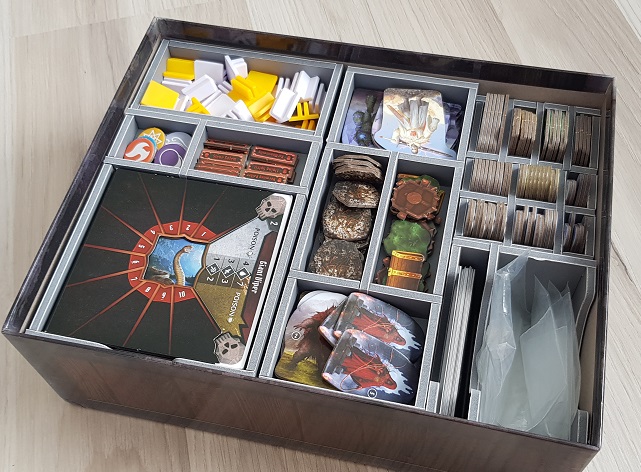 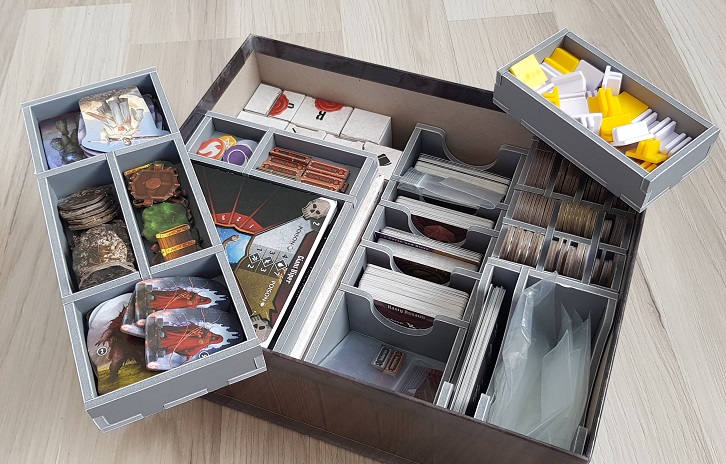 When it comes to Clank!, the situation is different once more. The base game doesn’t come with too many components and the original insert is OK, especially for the cards. Okay, you have problems with small tokens that you have to always sort out and put in separate bags. But the situation is not so terrible that you would need a third-party solution urgently.

Still, the Folded Space insert is useful. You can have the tokens separated at all times and you gain a couple of minutes during the setup when you just put the boxes out from the box and not the table, rather than having opened all the bags and sort them.

The insert truly comes to its own the more expansions for the game you have. It has space for all of the Clank! expansions and their boards – only the Ape Lords board doesn’t fit if you have all of them.

Verdict: Not necessary if you only have the base game, but becomes indispensable the more expansions you add.

Altiplano, a bag builder with many cardboard tokens and numerous other components follows a similar policy to Gaia Project or Clans of Caledonia. Apart from five cardboard containers, all of the original components are packed in plastic bags. There are soo many components that this not only prolongs the setup but also deters you from playing in the first place.

Folded Space, once again, comes to the rescue. The layout is logical and fits together with cardboard containers and cloth bags neatly. The setup is greatly accelerated, although you still need to prepare a number of tokens, depending on player count. The insert also fits all the components from The Traveler expansion, although some of them (looking at you, gems) are a tight fit.

Verdict: Another winner. A must-have and I wouldn’t play the game without it. 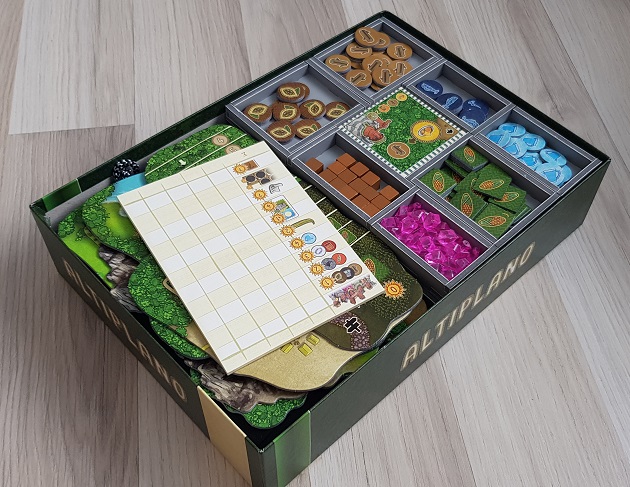 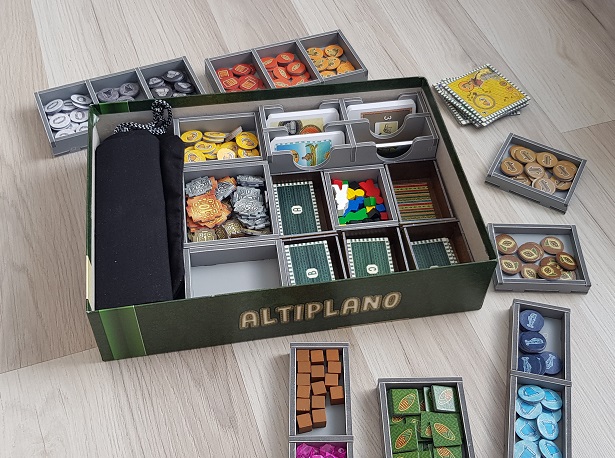 Praga, a rondel action-selection homage to the Czech capital city does not suffer too greatly from lack of storage. The biggest problem that I experienced during the gameplay is handling stacks of Buildings, Walls, and Upgrades. You’re supposed to have them ready by the side of the board, but often, they will topple over and scatter around, especially if your hands are on the clumsier side of the dexterity spectrum.

Folded Space helps mitigate this little problem, as you can use the trays directly in-game. It also provides storage for player pieces, eggs, and windows, which would otherwise lay around. It speeds up the setup slightly, but honestly, that wasn’t such a big deal with this game in the first place. It’s worth adding that the insert does bloat the box a bit and the lid does not go all the way down with it.

Verdict: Definitely useful and makes the storage more elegant. Nice to have, although the game doesn’t really need it. 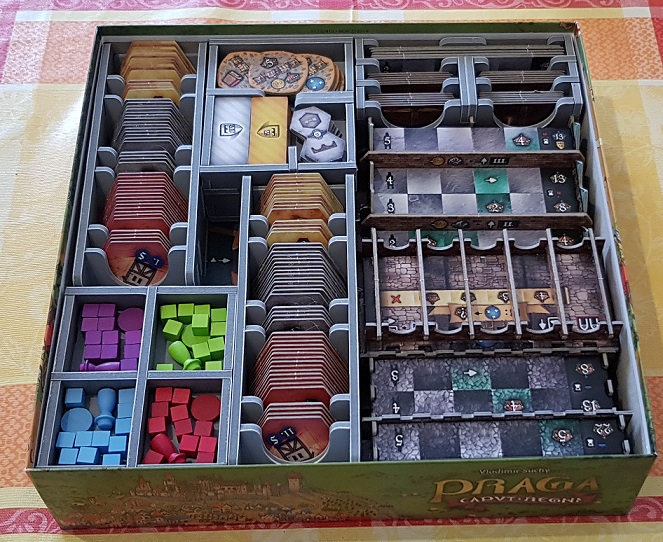 I’ve also tried out the insert for my version of Brass: Birmingham (retail, not deluxe). Here, the largest storage issue was down to industry tiles. Originally, they are stored in a bag, which means that you have to sort them out on every setup and place than on your player mat. That can take a while. I didn’t have problems with other components, although I did use trays for coins.

With the Folded Space insert, the industry tiles all have their slots, which makes setting them up a lot less frustrating and faster. Of course, everything else also has its place and everything fits perfectly in the box, although, just like Praga, the lid did not come all the way down.

Another nice touch is that the insert works for both Brass: Birmingham and Lancashire. Not only for retail versions but also for deluxe versions.

Verdict: Helps a lot with the setup, but a wouldn’t say it’s a mandatory upgrade.

We covered this Folded Space insert in a separate article. 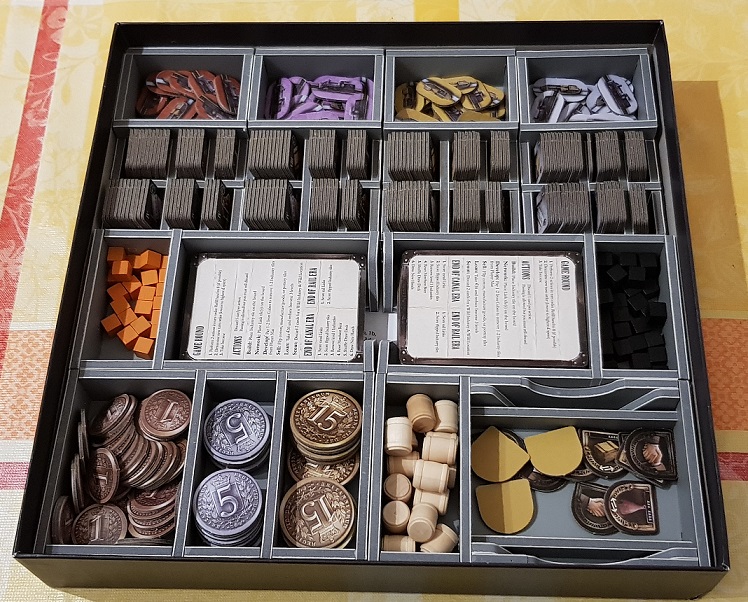 Of course, Folded Space is not the only one on the insert market. Broken Token, eRaptor, or Laserox is certainly something to look at if you want to add some more collector’s value to your board game. They look better than Folded Space, use more quality material, but also cost more.

Then there are numerous smaller producers, there are a lot of alternatives- just check out Etsy. And lastly, there’s always a DIY option, depending only on your skills and material of choice.

But none of the above options come close to Folded Space when it comes to price, ease and time of assembly, and just overall robustness.

I recommend buying from the Folded Space website directly, since the prices are the lowest, even when considering shipping.

The inserts were provided to us by Folded Space, except for Clans of Caledonia, which we bought ourselves.