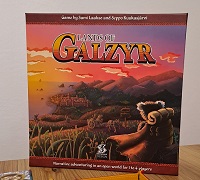 Lands of Galzyr promises an approachable adventure in a world that you can freely explore and evolves depending on your choices. Does it fulfill its promises?

Introduction to Lands of Galzyr Review

I have to admit that I’ve always been reluctant to play open-world games, let that be board games or video games. Yes, I finished Witcher 3, but that’s more of an anomaly than a rule. I normally find such games way too time-consuming for my lifestyle. They demand that you fully immerse into their worlds.

While I’m sure games such as Sleeping Gods or Tainted Grail are masterpieces, it was Lands of Galzyr that ignited my interest in an open-world board game. It promised a casual, family-friendly environment, and an evolving world, that is both easy to enter and exit.

Lands of Galzyr is a light board game set in the open world of Daimyria. The land is inhabited by animal folk (this is also the world used in the designer’s previous titles; Dale of Merchants) and you control one such character. You embark on numerous quests of all flavors: negotiating, searching, guiding, stealing, smuggling, escorting, fighting, exploring, joining revolts, and so on. Very very diverse.

The quests are experienced by reading the journal on the website (you can also download it to a device of your choice, so you don’t need an internet connection), while the outcomes are determined by skill checks – dice rolls, on which you have a lot of influence. Your skills, equipment, companions, and traits all affect the type and number of dice, as well as possible re-rolls.

The world evolves and your actions can have long-lasting consequences. Characters do not level up, which allows new players to join and leave liberally. Consequently, the game has no red thread or grand goal that you try to beat but is a cluster of more-or-less connected quests, that never ends.

Nonetheless, the narrative the quests provide is engaging and interesting. There are obvious outcomes, as well as plenty of twists and surprises. Even unsuccessful skill checks result in intriguing results. You may end up lost, freezing, or even arrested and then you have to dig your way out of it. Successful quests are rewarded with victory points, equipment, money, or companions.

There’s a lot of reading (supposedly there’s enough text to fill out 6 “regular” novels, whatever regular means), but the writing is light and playful. It never feels like a chore. Contrary, you read new passages with great interest, as they directly affect how your character’s journey continues. After a passage, you usually have several choices for skill checks, a bit like a choose-your-own-adventure book.

You’ll normally complete 1-2 quests per playing session, which is limited by a number of rounds. After that, the scores are tallied up, and the characters go for well-deserved drinks at the inn, rounding up the session. You can play competitively or cooperatively, but it doesn’t really matter as there’s no PvP fighting and the game is not really score-focused. It’s more about the journey.

All the unfinished quests, as well as equipment, are carried over to the next game, thus continuing the cycle.

The presentation is on a very high level in Lands of Galzyr. The board offers two sides; summer and winter, and both look stunning. There are well over 300 cards included, most of them with a unique picture. The artwork on the cards is consistent and helps with feeling engrossed in the fairy-tale world.

Other components are solid, as well. The dice feel heavy and are enjoyable to handle, the meeples are screen-printed, and the iconography on the tokens is spot-on. The board is double-sided (summer and winter sides), portraying the passing of time as the months go by.

Getting into the game is a breeze. The rulebook guides you step by step through the setup process, and the game mechanics (mainly moving) are simple to understand. The rest of it (skill checks, equipment, and companions) is handled either by an app or your look them up when you get to them. The app helps with the structure of the game, moving the gameplay forward and providing an all-around smooth experience.

Lands of Galzyr delivers on the promise of being a family-friendly game. You can teach it to new players in minutes and they can hop right in and enjoy the quests immediately.

Likewise, the setup is rapid, as well. The card library is already prepared in the box – you just take the appropriate character cards and set up the map and you’re good to go. Similarly with storing and saving the game state. Just stow the active cards in the appropriate compartments and they’ll be ready for the next game.

It’s all surprisingly simple, especially considering the game allows you to alter the world and save your progress.

The base game comes with four characters to choose from. They all come with special abilities, pre-selected skills, and personal tags. Some also have a starting quest that helps you introduce yourself to the world. Other than that, you can do everything with all of them.

This is the part that covers the game mechanics and the overview of the rules, but in Lands of Galzyr, there aren’t that many really. You begin each turn by optionally moving by one or two spaces on the map. As a free action, you can pick up quests, if any are available on the locations you traverse.

When you’re done with moving, you will resolve the scene on your final location for that turn. Normally, these will be quest related, as each quest requires you to be in a specific location to progress. The tests that you’re required to pass vary in difficulty (how many icons on dice you need to succeed) and flavor.

The flavor of the test is highly important. If you have the right tags (i.e. the test is a “Search” test and you have an item that has a “Search” tag – i.e. a lamp) you can get bonuses in the form of free re-rolls or even a number of guaranteed positive results. The skills also work in cohesion with this – they dictate which dice you are allowed to roll. You will have the greatest odds if you have skills that correlate to the required tests (i.e. if you’re fighting you want the dice with the swords).

The skills you have available are displayed on your character board in a circle because that’s how they work together – in a test, you also get to pick the dice from two adjacent skills – these dice are not as good as the first-picked skill, but still a lot better than the generic black dice.

The tags can be obtained with items, your character states, and companions. This results in a lot of room for character customization. Negotiator, fighter, explorer, scholar, etc. You can go very specific, which of course affects how successful you will be at various tests. I believe the design has struck the right balance between accessibility and build depth, luck and strategy.

If you’re in a location and can’t (or don’t want to) resolve a quest, there will always be a scene for you to enter. In cities, there are markets and other locations, while in the countryside, you draw an event card and get a scene number from that. These scenes, however, are shorter than the ones in quests and the rewards are also smaller. But they are a nice filler when you’re on the road to a quest location.

And that’s the whole game. Now all there is to play it again and again and experience as many interesting quests. But despite the engaging quests, the long-term value of the game is debatable. The lack of a grander goal is an issue as the aimless wandering gets old sooner or later. Despite the engaging quests. It will grip you for half a dozen plays and then it will slowly let go.

Lack of character development adds to this. Yes, you will add new items to your repertoire, swap skills, earn and spend money, and add companions to your party. But overall, your character remains fairly static. Of course, both of those issues are actually design features. The authors consciously chose the path of accessibility over gameplay depth.

As mentioned, there is a lot of reading. The manual suggests that the players should read the text to each other, but we found that process too slow and cumbersome. We resorted to silent reading, which did reduce the immersion a bit, but it allowed us to play the game much faster. It’s worth noting that we’re not native English speakers, so it’s probably down to the group on how they read the text.

The suggested playing time is pretty much spot on. This is fine for solo or a 2-player game, but the game gets longer with more players, despite there actually being fewer rounds. Again, there’s a lot of reading and players resolve their scenes one at a time.

This also means there’s not much player interactivity or things to do when it’s not your turn. Alright, you can join a scene from another player if you happen to be in the same location and solve it cooperatively, but this mainly happens by coincidence rather than planned play. Everyone is focused on their own quests and journey. You’re not going to go out of your way just so you can join another player on a quest.

All this suggests Lands of Galzyr is a 3-player max game and it works best for 2-players. The solo mode is quite good too – the lack of player interactivity means you’ll experience pretty much the whole game this way.

The deluxe edition has a few more goodies to its name. The neoprene mat, extra dice, dice tray, adventure journal, and premium card sleeves all enhance the experience. But they are absolutely not necessary to purchase. The cardboard mat is fine (personally, I think it looks nicer than the neoprene), there are enough dice in the base game, while the other goodies are purely cosmetic.

Lands of Galzyr is a very fun, story-rich, and accessible open-world board game. You’ll fall in love with the characters and the world immediately. The quests are diverse and immersive.

While the lack of a bigger goal means I don’t see myself going back to it too often, I can still wholeheartedly recommend it, particularly to more casual groups, where players and player numbers vary from session to session. 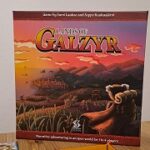