This article covers the Scythe factions, their peculiarities, style of play, and strategy. Although you can play Scythe board game factions as you like (they can all explore encounters, build buildings, enlist, deploy mechs, and fight), this will only work against very weak opponents.

Against better ones, you have to take into consideration your faction’s strengths and weaknesses and play accordingly. That’s the only way to stay competitive in a harder game. So, to get to know the Scythe board game factions, I went back to the BGG library.

There are five different factions available in Scythe – we’re talking only about the base game for now (I cover the expansion in a separate article): Nordic Kingdom, Rusviet Union, Polania Republic, Saxony Empire, and Crimean Khanate.

The faction’s abilities and their fixed starting positions suggest that there is an optimum always-working strategy to play each. Imagine openings at chess.

But thanks to different player mats, random encounters, and objectives, this is not entirely the case. The gameplay is different in every game, but still, somewhat faction-specific, thus certain guidelines for each faction can still be drawn. I’d say there is just the right amount of randomness in every set-up of the game.

I looked into the Scythe basic strategy in the previous article – read it before you continue. 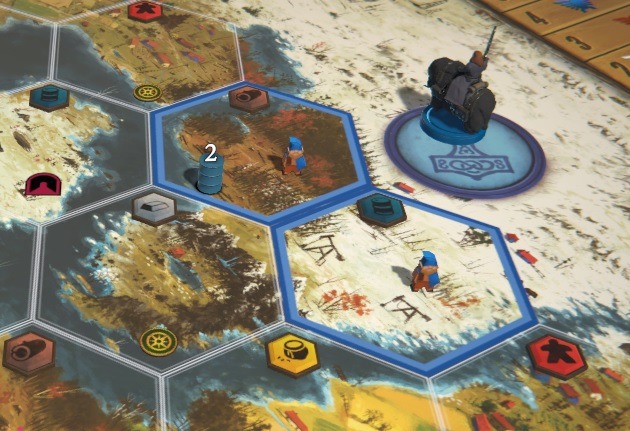 Starting peninsula resources: wood and oil, with access to metal.

Starting Power and Combat cards: 4 and 1.

Nordics are your Viking lookalikes and, as their name suggests, they start on the north of the map. Thanks to the ability of their workers to swim, they are a very flexible faction to play. They are very easy to adapt their strategy to whatever player mat you get. That makes Nordics one of the better factions for beginners.

Their game usually starts with moving at least one worker to a village. They can move both, but that makes it difficult to access metal and build mechs later. As soon as your workers reach the mainland, you can then also build mechs there, which negates the need for Riverwalk. Building an early mill is not a bad idea, because your workers will be spread out more than usual.

A defensive balanced play works best for the Nordics. They can use Seaworthy to retreat to lakes if they lose combat and are then ready to counterattack the next turn – combine this with Artillery and opponents will be reluctant to attack you in the first place. Take Riverwalk as your last ability. 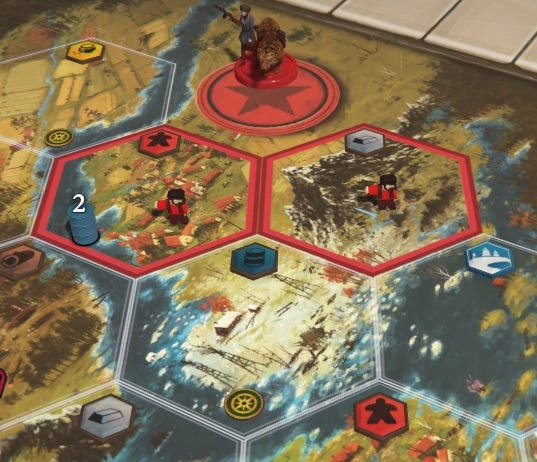 Faction special ability: You can choose the same section on your action mat as in the previous turn.

Starting Power and Combat cards: 3 and 2.

The Ruskies are a very powerful faction and another beginner-friendly one, mostly thanks to their special ability. They are all about production. Sit on a resource needed for your bottom row action for production and you have four turns completed and a star in the bag. This ability is so powerful, that Rusviet is not allowed to have the industrial mat. That combination is considered overpowered.

The Rusviet starts in a village, which means they can start multiplying right away and in the second turn you can already have five workers. Trade to get the rest of the metal and carry your workers to the next tile and then produce, produce, produce.

As mechs go, speed is always useful, but with Township, you can also get to the factory relatively early. Getting a good factory card can be, thanks to a special ability, very powerful as well. I would get People’s Army next (to discourage attacking me) and save Riverwalk for last.

One of the problems the Rusviet has is food, which is not very accessible. That means less enlisting and less reliance on your neighbors. You have to be self-sufficient. 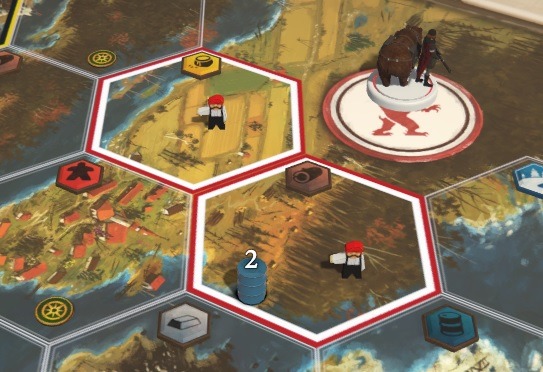 Starting peninsula resources: food and wood with access to a village.

Starting Power and Combat cards: 2 and 3.

Poles are a very outgoing faction. They have the weakest starting position (lack of metal and oil makes problems for their bottom-row actions) and are forced to move and explore. Their special ability reflects that and the more encounters you get, the more you benefit from it. Just try not to pick options where you lose popularity.

Mobility is key. Use whatever opportunity your player mat offers to get your character on the mainland as soon as possible. Build a mine (use that wood you have) to move or Riverwalk, if that’s not possible. Use mech abilities to further boost your movement possibilities. Take Camaraderie as last.

Polania is a strong enlister and depends on its neighbors a lot. You have food. Look at what your neighbors are likely to do and enlist accordingly.

After you pick up a few more encounters, you’re in a very strong position for the mid and end-game. 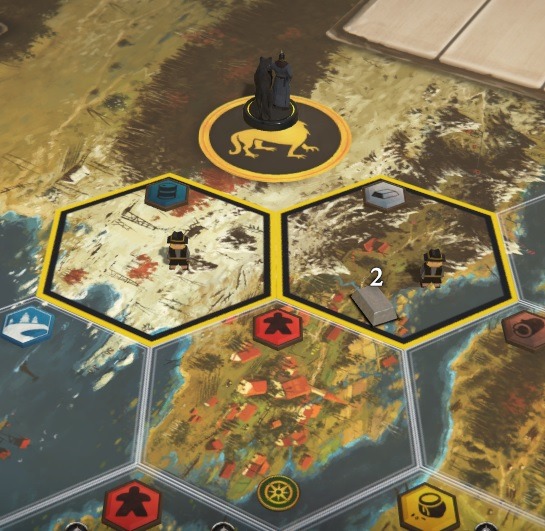 Faction special ability: The number of stars they can get from combat is not limited.

Starting Power and Combat cards: 1 and 4.

The Germans are all about military might and combat capability. Their strong starting position (access to early mechs with metal) combined with Underpass and 4 combat cards means they can start fighting and hurting other players early on and win a game before others are strong enough to respond.

The best way to start a game is to move to a village, then produce and get an early mech with Underpass ability. Combine that with Speed and Disarm and Saxons can prey on weak targets all around the map. Riverwalk is not very useful.

Saxons don’t focus on their economy. They can do it, but it’s not something to worry about. Build things that directly affect your combat capabilities (armory, bolster, enlist if you can afford it) and then get out in the middle and look for fights. You can go to the factory if you like to provoke other players even more. If you catch them in a tunnel, they have no chance (Disarm). 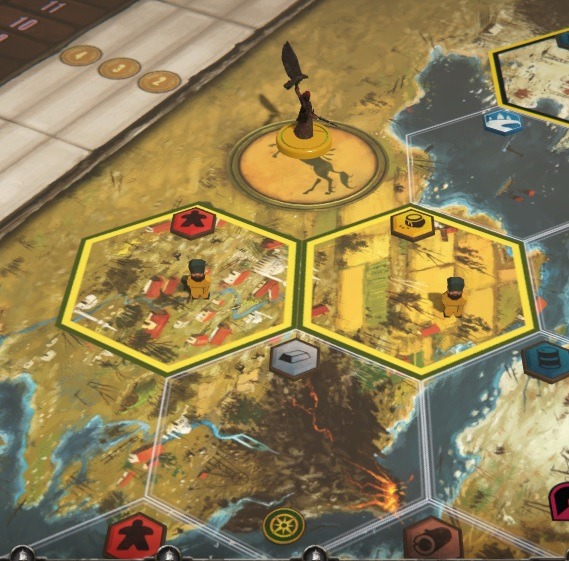 Faction special ability: You can use one combat card per turn as a resource.

Starting Power and Combat cards: 5 and 0.

Last, we have the Mongols. Or the Crimeans, as they call them here. Combat cards are the name of the game. They can use one per turn as a resource supplement, but they start with none. Your focus should be to get a steady inflow of combat cards – best achieved by enlisting since you have food. With Bolster, it’s still better to go for power, not combat cards.

After combat card enlistment, choose your enlistments on what your neighbors are likely to do. Crimeans are very weak for building (wood is hard to come by). They are nomads, after all.

Crimeans also have a hard time getting to the middle of the board. Their only option for that is Riverwalk. They can get to other inactive bases with Wayfare and get an encounter or some needed resources that way. It’s not the best ability, but it’s better than nothing. Speed is useful, as always and Scout adds to their combat card philosophy.

Combine all these factors, and Crimeans tend to focus on the outskirts of the map and stay below the radar of others (particularly beware of the Saxons who like to prey on them). I find them very challenging to play, as even one combat loss can set you way back, and with limited mobility, it’s hard to come back.

I have not listed the factions in random order. Instead, they are sorted by how challenging I find them to play. On top, there are beginner-friendly Nordics and on the bottom, challenging nomadic Crimeans.

But that does not mean any faction is stronger or weaker. They are just different and that asymmetric play with plenty of different approaches is what makes Scythe so tasteful. I like how the abilities of factions match their general philosophy, giving each a unique taste.

If you’re a fan of Stonemaier Games, check out my reviews on Tapestry, a civ-building game and Charterstone a legacy worker-placement game. Or an article on Wingspan.