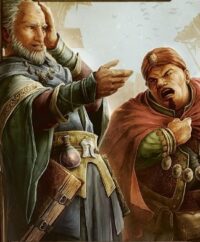 Lords of Waterdeep – Dungeons and Dragons board game is a strategic board game. Its main mechanics are worker placement, resource collecting, and card drawing. Read the complete review below.

Introduction to Lords of Waterdeep – Dungeons and Dragons Board Game

I’m always on the lookout for digitalized board games. I like to play a well-polished product, so I browse Steam often and have numerous board games on the wishlist, just waiting for a sale. Lords of Waterdeep – Dungeons and Dragons board game was one such game and it was on sale last week. 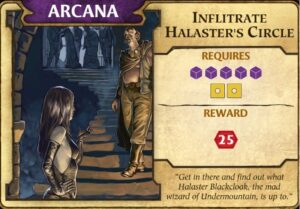 Lords of Waterdeep is a strategic game. Its main mechanics are worker placement, resource collecting, and card drawing. By characteristics, it’s a pure eurogame. First, you place workers to get resources, then you spend these resources as is requested on the tasks you draw. There are some tweaks here and there, but basically, that is it.

Set in Forgotten Realms (Dungeons and Dragons universe), you might think this is a thematic, adventurous game. You would be very wrong. Lords of Waterdeep only uses the famous setting as a presentation, but it could very well be anything else. But let’s have a look at the theme anyway since the presentation is good and it does create an atmosphere.

You play as one of the underground lords of the city of Waterdeep, who fight over influence, control, and their agendas. (Read: they collect victory points.)

This is done by sending their agents into key buildings in the city, who provide you with recruits of four classes (fighters, rogues, clerics, and wizards), money, gather quests, build buildings or perform special (intrigue) missions. You need recruits and money to complete quests, and quests earn you the most victory points. 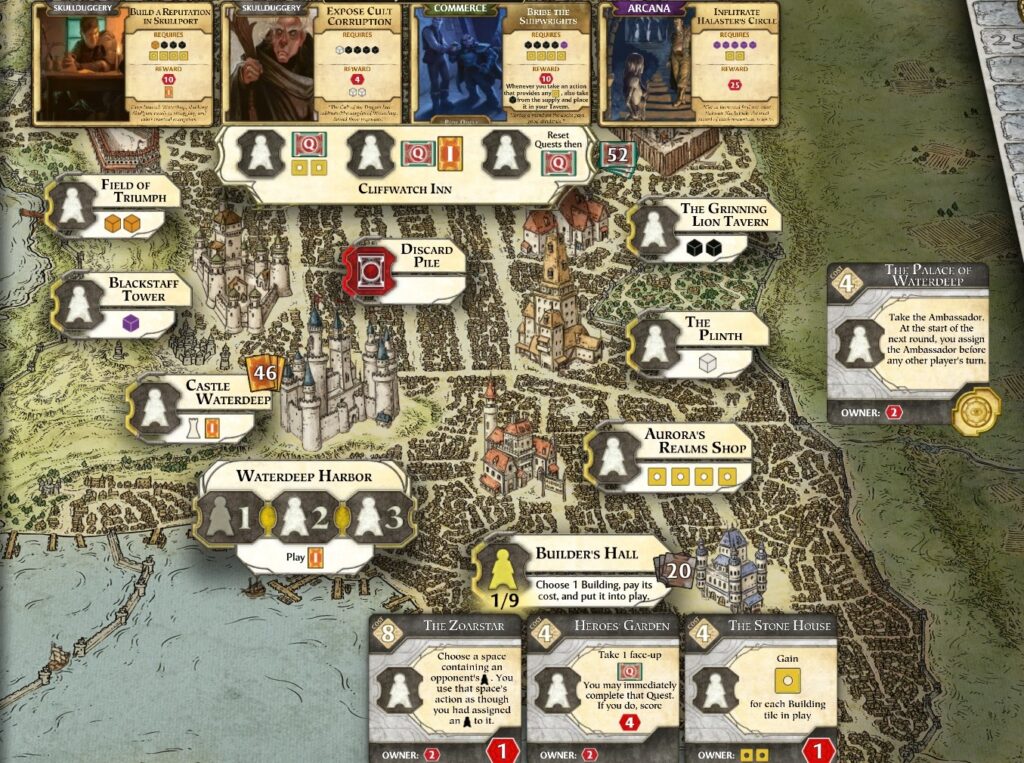 In a nutshell, Lords of Waterdeep is not an overly complicated board game. The game consists of eight rounds, and in each round, players take turns placing their agents, until they run out of them. Then the next round starts.

When it’s your turn you only do two things:

You can place an agent in any vacant building on the board.

Besides simple buildings that give you a recruit (or two) of a certain class or money, there are some special buildings:

Agents, placed in the harbor also get an extra action at the end of the round – that means they can be placed twice in a turn. 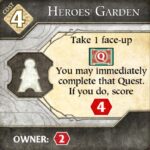 Advanced buildings are just that, advanced. They provide more recruits, intrigue cards, quests, money, or various combination of those.

Moreover, they provide victory points to the player who builds them and a bonus every time another player uses their building. These bonuses vary from, you guessed it, recruits, cards, money, etc.

“The difference between the quest for the Holy Grail and someone saying ‘bring me a cup’ is the flavor text and the number of stops involved.”

Ok, now that your agent is placed and you gained whatever that building does, it’s time for quests. Quests are an element, where the D&D legacy has the most influence and an element that provides most of the atmosphere. They have beautiful illustrations with flavor texts.

There are several types of quests (Warfare, Commerce, Arcana, Piety, and Skullduggery) and if you complete a quest that is aligned with your lord’s beliefs (randomly drawn at the beginning), you get extra victory points at the end of the game.

Each player starts the game with two quest cards and further cards can be obtained at the inn through certain advanced buildings and certain intrigue cards.

But, in the end, a quest is just a card that converts your resources into victory points and not an actual adventure, you’d go on with your fellow recruits. But if you have a good imagination, you could certainly make up stories in your mind about how your party defeated the Xanathar. 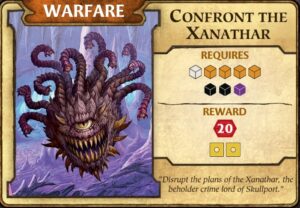 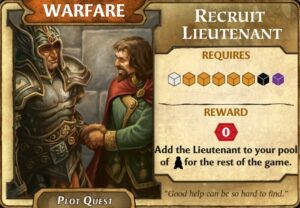 The Digital edition is a direct conversion of the physical one with all the rules and elements included. So, if you played one, you will feel right at home with the other. All the usual things, like different bot skills and online multiplayer, are included. 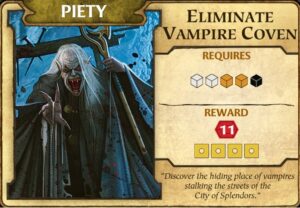 There are some minor issues (like too similar colors of some agents or a bit poor overview of other players’ resources – you can only see one opponent at a time), but all in all, everything works and feels smooth and polished.

Wait for a Steam sale

This also comes at a bargain sale of just a couple of euros (bought on Steam sale), so it’s really cheap. There are two expansions available (Undermountain and Skullport), which are sold separately.

As is usual with digital editions, some immersion and appeal are lost. This is especially crucial with Lords of Waterdeep, where the gameplay is abstract as it is and the digital version certainly doesn’t do it any favors.

It’s not something I see myself playing more in the future, but as a practice and test-the-board-game tool, it’s excellent and cheap.

I hope I didn’t come through as too negative in my review, because that was not my intention. I believe Lords of Waterdeep is a good game, particularly as a gateway game. The gameplay is well-balanced and there are plenty of options, choices, and tactics available.

Just be aware that it’s not a thematic D&D game with a glorious adventure, but a eurogame with its (a little less glorious) race for victory points.

Digital edition is something you should look into before considering the physical game. It will give a good feel for how the game plays.

What is your experience with Dungeons and Dragons games? Do you like their choice of game mechanics for this theme (or a choice of theme for this game mechanic)? Leave your comments below.

7 thoughts on “Lords of Waterdeep – Dungeons and Dragons Board Game”