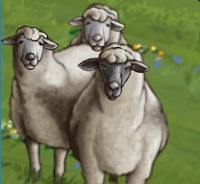 Read my review of Agricola: All Creatures Big and Small – Review, a younger 2-player cousin of a more famous farming board game. Should you play it and where?

Agricola is probably the most famous Uwe Rosenberg board game. It has set standards in farming and worker-placement games. But despite the very appealing theme, it has never been recommended for novice players or as a family game. It’s just too complex for that.

Uwe has tried to rectify the problem with the Family Edition of the game and the version, we’re going to speak of today. All Creatures Big and Small is a 2-player spin-off of Agricola. The game focuses on animal breeding and the rules are overall quite simpler and more accessible.

There aren’t a lot of components in the All Creatures box, but what is, is of very high quality. Especially the wooden “animeeples”, the animals that you breed on your farms. They really make the farm come alive and are a joy to handle and move around.

Each player starts with a farm board and 9 borders (fences). The central game board is placed in the middle with special buildings, farm expansions, feeding throughs, extra borders, and stall tiles.

How do you play Agricola: All Creatures Big and Small?

The goal of Agricola: All Creature Big and Small is to accumulate more points than your opponent. And the main way of earning points is having as many animals on your farm, preferably all four kinds (horses, cows, sheep, pigs). You can earn additional points with certain buildings.

All Creatures is a trademark worker-placement game. Each round (there are 8 rounds in total) you and your opponent will place three workers in one of the 16 slots:

The actions are carried out immediately as you place workers. After the work phase, you take the workers back, the animals breed, the action tiles get refilled and the work phase can start once again.

After 8 rounds, the end-game scoring takes place. You get points for:

The games in all Creatures usually go like this. First, you need to get some resources so that you can build stalls and borders that keep your animals in. You can then start adding animals to them. The sooner the better, because they will breed each round and you can add one animal that way in every subsequent round.

From then onwards, your moves depend on your opponent. You normally want to do the opposite. If he is grabbing animals, usually there will be a surplus of materials accumulating or vice-versa. Likewise, if he’s focusing on sheep, you might focus on a different type of animal.

You can upgrade your stalls into stables, increasing their capacity. This can be further increased with the feeding trough. You can also place these on pastures, which have the ability to be many tiles large, while only needing one trough for the entire area.

Upgrading is essential for larger animal numbers. As is the wise placement of buildings and borders. You can destroy or move an object, so you have to think in advance about where and how will you expand.

Filling your capacities with animals is a great joy and one of the most appealing aspects of the game. They are just so cute and lovely to handle. Women particularly love them. They make the game perfect for introducing them to board gaming. If you’re looking for something to play with your wife, Agricola: All Creatures Big and Small should be very high on your list.

When it comes to gameplay, the action board offers plenty of opportunities. There is always something to do, even if your opponent blocks the space you wanted. I didn’t find that frustrating at all.

The interaction between the players is at exactly the right level. Not that much that you would have to focus your decisions around theirs, but not also that little that you could forget about them. A good friendly competition.

Where the game lacks a bit, is the long-term appeal. Although I have never built two exact farms, all games start out in a similar manner. This is not helped by only 4 special buildings included in the base game.

The problem is somewhat mitigated with the expansions, which greatly increase the number of buildings. You will want to add them after a few games and are pretty much mandatory.

I managed to snatch Agricola: All Creatures Big and Small for a few bucks on Steam (there are also versions for iOS and Android) last week.

The game is produced excellently. It looks great – the board and actions are clear (well, the troughs could be slightly more pronounced) and it comes together with the first expansion.

It offers online play, bots, and even hot-seat mode. While the appeal of handling the meeples manually is lost, this is a great interpretation.

I recommend it a lot, especially if you can manage to get it on sale. Given the (un)availability of the physical edition, this might be the only way to try the game.

Agricola: All Creatures Big and Small is a great 2-player game and I like it a lot.

The lovely farming theme and simplicity make it perfect for introducing new players to the hobby, while the planning and optimization will also not leave more demanding players cold.

While it won’t replace more complex games for me, it does earn a spot in my collection.

Agricola: All Creatures Big and Small 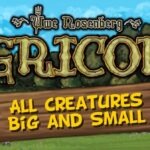