This article consists of raw facts, an overview of the theme, components, rules, and gameplay. Near the end, I also take a look at expansions and the digital edition.

And at the very end, I give my verdict. Is it rightly one of the best or is it overrated? 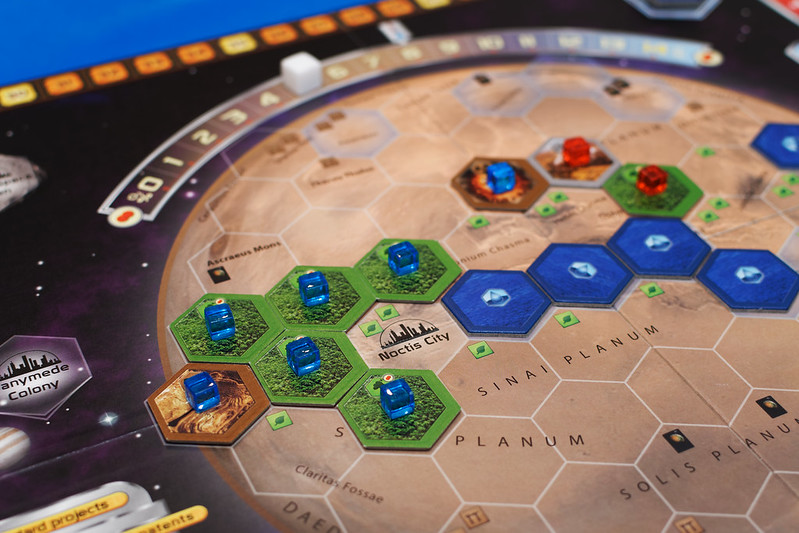 Designer: Jacob Fryxelius
Published in 2016
Players: 1-4, best experienced at 3 and in solo mode.
Playing time: 2 hours, but it depends on the player count. Less than an hour for solo play.
Recommended ages: 12+
Complexity: medium/high

The Red planet welcomes you

While today we’re planning on going back to the Moon and only dreaming of traveling to Mars, in the 25th century, space travel and colonizing Mars have become a norm. But in order to make Mars habitable, it has to be made more suitable for life – terraformed. Oxygen levels and temperature have to be increased. The surface must be filled with oceans, forests, and cities.

Even though the project is sponsored by the World Government, different corporations see Mars as a great opportunity to profit and expand.

You play as one such corporation and compete with others for victory points, rewarded for your contribution to terraforming and other infrastructural and scientific advancements.

The theme is one of the strongest points of Terraforming Mars. While it is a pure eurogame, you strongly feel as if you’re really on a rock far away from home, facing all sorts of environmental dangers, while trying to complete projects to make that rock your home.

The main contributors to the atmosphere are unique project cards, which are based on futuristic events. They are believable science fiction, derived from real science. They might not be possible just yet, but you can imagine that with future technology they will be.

To add to the immersion, cards are equipped with relevant imagery, although the images are from all over the place and lack a consistent style.

The quality of the components is merely OK. It gets the job done, but it’s nothing to write home about.

But I can’t help to think that there is so much lost potential in this area. Player mats are just cardboard and placing marking cubes is imprecise. God forbid, someone accidentally bumps it. Game over.

Double-thick mats with slots would be perfect for this (like Scythe). Or even slide-less mats like in Tapestry. There are third-party solutions on the market though. Or DIY …

Frankly, the components could use an overhaul and would bring the appeal of the game to the top level. Maybe a revised ultimate edition including all the expansions will come in the future? One can dream … 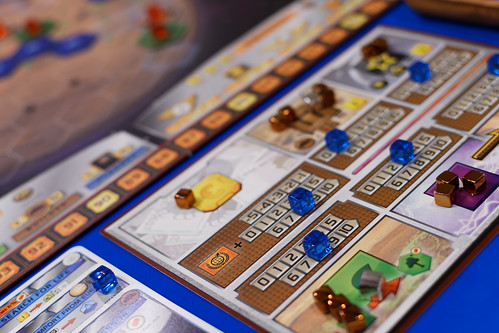 How the game works

You start the game of Terraforming Mars by picking a corporation (12 corporations are included in the base game) and your starting project cards, both from a number of pre-drawn options. The initial draw is very important and will show you the general direction your play should go.

Corporations themselves differentiate a lot: their starting capital and abilities give them character and you can’t play them all the same way.

After that, you pretty much have no restrictions (apart from resources) on what to do. You can place oceans, forests, and cities as standard projects. Crash an asteroid to increase the temperature of the planet. Or do it the more linear way and build a power plant instead, increasing the heat gradually.

But building just standard projects would get boring pretty soon. In each round, you will have a chance to reserve project cards (you normally choose from four). Reserving them costs money, so you must think ahead and not just grab all of them. These special projects can make or break you. They are expensive to build but offer substantial rewards. To see examples, check the pictures.

Build projects that are going to complement the way you play and give you what you need or you’ll be throwing money out of the window. And money is always scarce. You receive income before every generation, together with other resources: building materials (which act as discounts when building projects), plants, energy, and heat.

Each resource has two values: what you have and what you gain. You can increase both, so engine building is a big thing in Terraforming Mars. Your initial generations (rounds) will be short, while later you’ll be able to chain together several powerful actions and transform Mars significantly in just one generation.

Every time you change the surface, your terraforming rating (TR) increases. This is important because TR is the basis of your money income plus it is the base score for end game scoring. Any projects, standard or special, that increase it, are very valuable.

Further adding to the final score are: 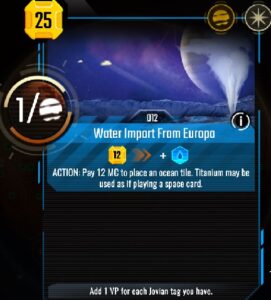 The combined end goal of all the corporations is to terraform Mars: max out oxygen and temperature meter and place 9 ocean tiles. When this is achieved, the game ends. This means that the players dictate when the end game conditions are met and can shorten/prolong the game based on how focused their actions are.

The solo mode is the cherry on top

In single-player mode, however, the situation is turned upside down. You are the only corporation now and you have to fully terraform in 14 generations. This is a very tight schedule and you must optimize your engine from gen 1. Focus on essentials: use standard projects and only take project cards when you are sure they will benefit you more than a standard project.

You will be thin on finances as it is: planting forests for oxygen, placing oceans, building power plants, or crashing asteroids for temperature. If you manage to complete all this and still have enough to build cities and purchase “luxury” project cards, then you are a far better player than me. 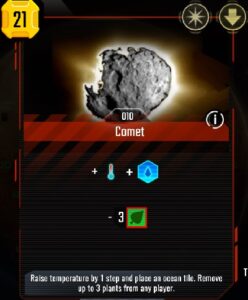 It’s one of the more challenging solo modes and that’s why I like it. The first couple of times I played, I was so far away from completing the terraforming process, that I was sure there is something wrong with the setup, rules, or the game. But the mode is beatable and when you finally make it, it feels great.

I’d even go further and say that the solo mode is the main attraction of Terraforming Mars. Multiplayer is not bad, but next to a comparable tableau builder Ark Nova,  it is nothing memorable.

But the pace, balance, and suspense they managed to achieve with solo play is head and shoulders above the rest. Duration is perfect at 50 minutes, a third of that with the digital edition.

There is no room for errors and come to the 14th generation you’re always on the verge of (not) succeeding. I still can’t believe how Jacob Fryxelius managed to create such an “on the knife’s edge” experience with it. Honestly, I can’t decide whether it was a fluke shot or a touch of genius. 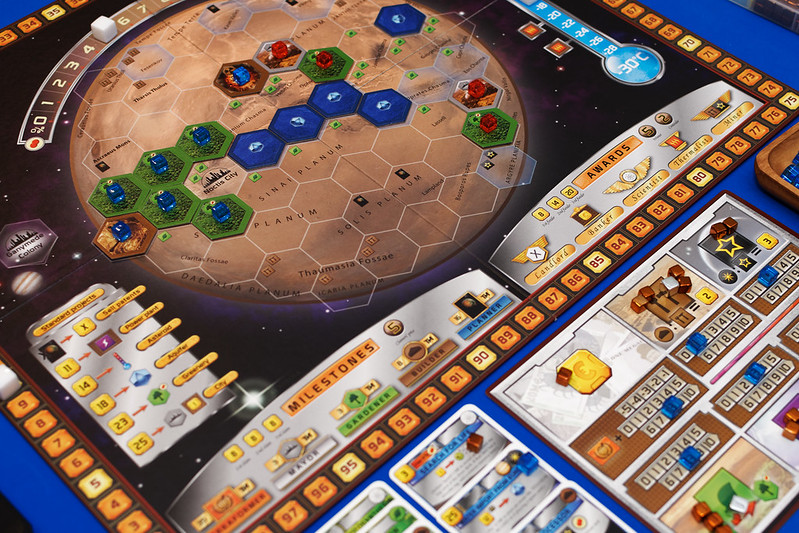 Large repertoire of projects waiting to be built

While the game mechanics are of medium complexity, what puts Terraforming Mars one notch higher, are all the correlations and inter-dependencies. Energy gets converted to heat, you can convert plants to forests, there are rules where tiles can be placed, etc.

But projects take the crown. There are 208 in the base game and even after several games, you will encounter new ones. Several require a temperature, oxygen, or tag (meaning you’ve already built a number of related projects) prerequisite. 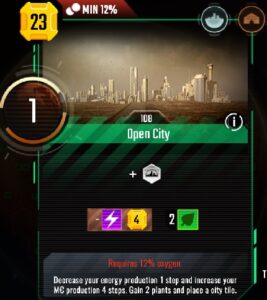 They can alter your resource income, add special actions (like placing oceans cheaper, paying to increase your TR, adding resources on themselves for extra VP), place special tiles (mines, factories, nuclear zones …), harm your opponents, the list is endless.

Understanding them and knowing when to build a certain project takes some experience and a new player against a regular will be crushed heavily. But these project cards keep the game fresh and diverse even after dozens of plays. Of course, they add an element of luck, but there’s no deck without a random element.

Even though luck of the draw is usually not a game-deciding thing, there are still mechanisms to help alleviate it. You can play by “draft” rules, which further reduce the randomness of the way the cards are drawn. The draft mode does increase the playtime a bit, though. It’s a trade-off and personal preference.

So far, Terraforming Mars has received five expansions. The first four are smaller (and cheaper) and enrich only a certain aspect of a game, the fifth is slightly larger and also alters gameplay the most. All the expansions can be combined in any variation, giving you the freedom to mold Terraforming Mars to your liking. 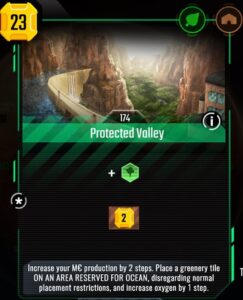 Expansions are not recommended until you get well familiarized with the base game as they do increase the complexity a bit. Get the base game first and build up from there. 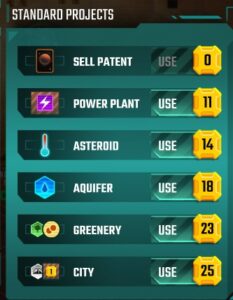 The Steam edition was my first point of contact with Terraforming Mars. It’s an excellent port of the tabletop edition, with some aspects improved.

I do recommend the digital edition. It’s so easy to hop in and play a quick game in the same time it would take you to set up a tabletop version. It’s an excellent tool to get acknowledged with all the corporations and project cards. 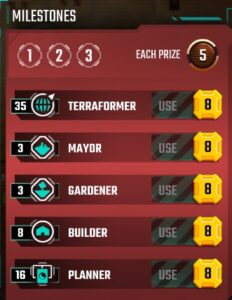 So, Is Terraforming Mars worth your money? The answer is triple yes. Tabletop edition, expansions, digital edition. They are all great value and I can only recommend them.

Is it one of the best games of all time? Hard to decide on that one. I’d say yes, but not really a top 3, more like somewhere in the top 10 or 20. It’s an excellent game, but so are many others. I guess it comes down to personal preference when you try to rank all those excellent games and everyone’s list will be slightly different.

>>>Terraforming Mars is available on Amazon<<<

I am a member of the Amazon Associates program and will earn a commission if mo make a purchase after clicking on the link above.

How does Terraforming Mars compare to Scythe?

Tiny Epic Galaxies Review – They are Tiny and they are Epic