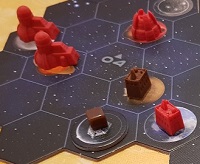 In this 10 Best Civilization Board Games in 2022, you can read about the board games that recreate the epic sense of humankind development. Lead your people to prosperity!

Introduction to Best Civilization Board Games 2022

The Civilization series of video games is one of my favorites and most played ones. I’ve played all of them, including spin-offs and alternatives. There’s just something about watching your nation grow from a feeble tribe to a mighty space-faring civilization.

While board games are a slightly different medium, there are titles that can replicate this epicness. While they usually can’t be as complex mechanically, the physical presence often makes the sense of accomplishment and progression even stronger.

Tapestry is a Jamey Stegmaier’s (famous for Scythe and Viticulture) take on civilization games. It features 16 asymmetric factions which advance through the ages of human history. They are named by their “profession”, rather than nation. You have Entertainers, Alchemists, Architects, and so on.

The game is played on a hex map, but its peculiarity is the four action tracks on which you progress and perform the corresponding actions. If you want to do something expansionistic, you need to advance on the Military track.

While at its core, a fine game system, unfortunately, it does not suit a civ game much. It feels too restrictive and linear. Other than that, Tapestry is a fine product. The gameplay is polished and the presentation is nothing less than spectacular.

While A New Dawn is not the first civ game that boasts a license from its video game cousin, it’s the first that’s worth talking about and that will satisfy the fans.

The setting is classic. You start as a puny tribe. Through exploration, expansion, research, trade, and war, you will lead your people into the future, and (hopefully) prosperity.

Civilization: A New Dawn uses a very clever action selection system (copied in Ark Nova), where the unused actions become stronger and stronger. Therefore, the gameplay revolves around tactical choices of which actions to use and which to save for later.

The game is further enhanced with a modular board, asymmetric civilization (featuring real nations), and victory cards that provide different end-game goals.

If you want a game that relates closest to the video game big brother, Civilization: A New Dawn is the game for you.

Clash of Cultures is a large game, where (again) you lead your civilization from ancient times up to imperial times. It features a wide and flexible tech tree and emphasizes city management. You can choose what buildings your cities will build.

There are multiple paths to earn victory points. Besides the already mentioned city-growing and technological advancements there are objectives, and of, course, glorious wonders.

The game has received a gust of fresh wind in 2021 with the Monumental Edition that comes with both expansions, Civilizations, and Aztecs, combined with the base game.

7. Imperial Settlers (Empires of the North)

Imperial Settlers pits Romans, Barbarians, Egyptians, and Japanese against each other. They need to strengthen their economy in order to fuel their war effort, trade, and other sources of points income.

During the game, you draw cards to your hand and play your hand cards onto the table, building a tableau in front of you. You can then use the actions from already played cards, making your engine ever stronger in generating resources, cards, fighting strength, and points.

The standalone sequel, Imperial Settlers: Empires of the North, builds on the very successful recipe. This time, you’re playing six different Viking clans. While the gameplay is roughly the same, the clans are asymmetrical and several of the game’s elements (you now draw from your own deck) are improved.

Imperial Settlers is an excellent board game series, that caters to both beginner and experienced players. The sense of progression is certainly felt in the engine building, although there’s no progression through the eras.

The progression through eras is certainly felt in our next contender, Nations. You control a nation – starting in prehistoric times all the way to the beginning of World War I.

Here too, the game is card-driven. Only this time you buy the cards from the offer and place them onto your board. You can populate them with workers, which will have them produce resources and special actions.

These will allow you to advance on several tracks (military, stability, heritage), which mark how you relate to other nations and where you are, victory conditions wise.

Nations ticks many boxes for the civ game. It’s epic and has a progress arch that is satisfying to witness. On the other hand, there’s no map (to observe your might), and the whole game often feels more of an abstract equation than a living nation.

5. Race for the Galaxy

If you want a deck of cards that gives you the illusion of building a galactical empire (or more precisely, one of the Earth colonies in the distant future) in under 30 minutes, look no further.

Race for the Galaxy is principally an action-selection and tableau-building game. The cards from the deck are multi-purpose and as you lay them down in front of you, they portray all aspects of your empire, resources, currencies, special actions, etc.

Multi-use cards and an elegant gameplay system allow for an amazing tactical depth. While the theme feels a bit pasted on, this still makes Race for the Galaxy from 2007 one of the modern classics. It’s particularly good at two players.

If you’re tired of the random element that cards and other components add to board games, this series is for you. A pure strategy of open information, comparable to chess.

Terra Mystica has 14 asymmetrical factions to choose from. Their objective is to terraform and populate the hexagonal map with their buildings, upgrade them to larger buildings, form towns, and score points in the process. The game is about careful planning and thinking several turns ahead.

Each faction can only build on its own terrain type, so you need to terraform it first, then populate it with buildings. Buildings are an engine and a tech tree at the same time. You need them to produce resources, but you also want them to upgrade to produce more valuable resources and bonuses and be able to form towns. Which gives you even more resources and bonuses.

Your actions compound and it’s truly important to know how to “open” the game properly. It’s no wonder entire studies have been conducted.

The variability is guaranteed with the number of factions, different starting locations, and round goals, that dictate your strategy.

Gaia Project is a revised Terra Mystica. It’s basically the same game, with certain mechanisms (research tracks in particular) reworked, and dressed in a space theme.

Which one is better is a matter of opinion, but one thing is clear. They are both at the very top of deep strategy games, although the civ vibe is not entirely present.

Perhaps the best game ever made. The holy grail of board gaming. So, why isn’t it number one? Simple, few get to play it often. This behemoth takes up a ridiculous amount of table space and the game can last up to 12 hours.

But not a single one of these hours is boring. You are in full control of a galactic civilization. Explore the map, expand, manage your economy and politics, negotiate, trade, and war with other players. Twilight Imperium has it all.

The factions are asymmetric and highly thematic (you’ll get in the role-playing during those 12 hours, believe me) and the whole experience is, for most, transcending. The only question is whether it will ever hit the table or remain a relic on your shelf?

On the other hand, you’ll have absolutely no trouble getting the 7 Wonders games on the table. The epitome of card-drafting, 7 Wonders combined elegance with meaningful decisions.

There is progress through three eras, but they don’t go beyond the ancient world. Each turn, you’ll draft a card and place it in your city, improving its ability to produce resources, money, military strength, science, and victory points.

You can then use these to add even more lucrative cards, further fueling your economic engine. Or, you can build one of the Wonders from the ancient world, giving you all sorts of good stuff and/or special abilities.

While the original 7 Wonders focused on card drafting where players drew one and passed the deck, this didn’t really work with two players. Therefore, the designers revised the gameplay with only 2 players in mind. In 7 Wonders Duel you draft cards from the offer in the middle of the table, with many other elements of the game also improved.

Be it at two or more players, 7 Wonders will allow you to immerse yourself in the ancient world. It’s perfect for casual players and families, while still offering plenty of juice for experienced players.

1. Through the Ages: A (New) Story of Civilization

Let’s expand on the card drafting element a bit. We’ll track military strength, science, happiness, food, corruption, government type, and culture, among other things. And we’ll expand the timeline to stretch from ancient to modern times.

This is Through the Ages in a nutshell. A game that lets you experience the full scope of civilization development, yet it doesn’t take the whole day to play. While the initial teach can be daunting, the game laters flows naturally and you can go through it in a couple of hours.

The lack of a map helps keep the playing time to a reasonable amount, but because of this, keeping track of everything can be quite fiddly. This causes a steep learning curve, but once you get the hang of it, it’s definitely worth it.

If you’re buying, certainly get the revised edition, A New Story of Civilization.