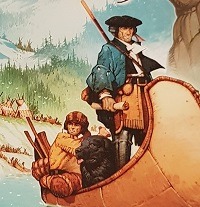 Good non-wargame history board games are not easy to make. One of those that best interpret the historical event is Lewis & Clark Board Game. Set on an expedition, interact with Indians, and try to be the first to reach the Pacific coast. Is it both historically accurate and a good game?

Shortly after the 1803 Lousiana purchase, president Jefferson commissioned an expedition to explore the newly obtained land, map it, and find a practical route to the Pacific.

The task at hand was entrusted to Meriwether Lewis and his friend William Clark. They prepared the expedition in St. Louis, left on May 14, 1804, went upstream the Mississippi, crossed the Rocky Mountains, and reached the Pacific coast at Fort Clatsop.

They returned via roughly the same path and reached St. Louis on September 23, 1806, with maps, sketches, and journals. The expedition itself was a great success.

The story behind the expedition is very interesting and I suggest you check out the Wikipedia page to learn more.

Do you want to go even further back in time? How about Sumeria?

Introduction to Lewis & Clark Board Game

Lewis & Clark: The Expedition lets you re-live the journey through a board game. This time, you’re on a one-way trip to Fort Clatsop, and there is more than one expedition party.

That’s right, the board game interpretation is a race to the west coast – the first one to reach it wins and everyone else is a loser. 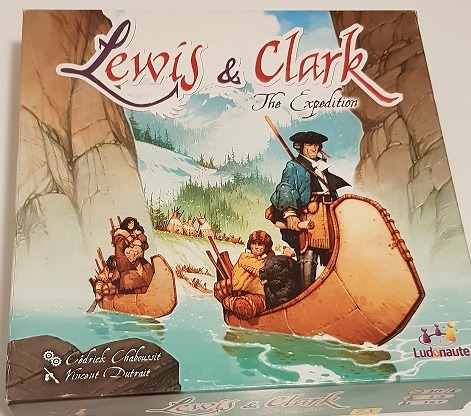 The first thing you notice is the outstanding artwork from Vincent Dutrait. From maps, right down to each character card, the style is easily recognizable and stunning.

The character cards are all historic people who, in one way or another, were a part of the expedition at some point. There’s a strong historical note to it, and it shows that designers did their homework.

Meeples are fairly detailed, while the resources are just hexagons. This is a good thing since they’re designed to fit onto boats and you can easily recognize how many you have.

The gameplay is a combination of action selection, deck-building, worker placement, and resource management.

Generally, you move your scout along the path using advanced resources: canoes (on water) or horses (in the mountains). You can obtain these in the Indian village by trading them for regular resources (wood, food, and tools).

But to convert resources into movement, you must first play the commander card. The trick is that all cards are dual-purpose – you activate them or use them to activate another card. So, you’ll be constantly contemplating which cards to activate and which ones to use just for powering up.

Besides the commander, there are cards that let you gather resources or gather Indians from the village. Later on, you’ll be able to purchase more and more powerful cards, that let you move through mountains and over the river using different resources, use all sorts of special abilities or allow you to break the rules in some ways.

But let’s stop at the Indian village first. The Indian meeples that you collect during the game can be used at several slots. You can gain resources (an alternative to cards), convert resources, refresh the card offer, and so on. This is your typical worker-placement mechanic and it works great, complementing the card-play.

All right, I’ll just stuff my boats with resources and Indians and be all set to go. Well, it’s not that easy. Each time you run out of actions (you can’t afford to play more cards or Indians), you must make camp.

Any unused cards, Indians, or resources beyond your boat capacity will cost you spaces on the track. Carry too much stuff and your scout may have to move backward on the track!

I like the challenges Lewis & Clark presents to you. You start out with six cards and you must decide which to activate and which three to use to power them. Moreover, some stronger cards need more than one strength to power up or can power up other cards multiple times, allowing you to perform a single action numerous times.

You can also power up cards with your Indians, so there’s another layer to keep an eye on. Indian meeples are a peculiar kind themselves since you never really own them. They just help you on a part of your journey, until you use them in the village, where they become available for everyone.

The deck-building part is decent. There are plenty of different cards available, offering different strategies. Sometimes you’ll acquire a card that offers you to traverse mountains using Indians, completely turning your game upside-down.

But there are also shortcomings. I haven’t felt the urge to purchase too many new cards. Those that allow you to cross terrain are in the majority and are immediately useful, the rest are a mixed bag. From very situational cards to completely useless garbage. I found myself adding just a couple of cards per game which was enough to be efficient. Since I’m a big fan of deck-building, this was a bit disappointing.

Worker placement is solid, but also nothing memorable. You’ve got slots for a single worker and slots where there’s no limit and so on. The most interesting thing, as I already mentioned, is that the Indians are shared. When you play the Interpreter card, you can take all of the Indians from the village to your both, readying them to power-up cards or for usage back in the village.

It’s not a given that you should take all of them. If you can’t use them before the camp, you’ll suffer a penalty and will have to move your scout backward. Even if you use them and gain too many resources, you may move backward because of that.

So, Lewis & Clark is a big optimization puzzle. You need just the right amount of resources, Indians, and action cards. Too many, and you’ll be penalized – too few, and you won’t progress fast enough. I found the puzzle interesting, especially since there’s almost no luck involved. It’s also just the right amount of complexity – you’ve got something to think about, but not an analysis-paralysis amount of thinking.

Switching victory points for a race is also a refreshing approach. It’s very thematic and masks the euro-foundations behind the mechanics. It also makes handicapping players easy – you can give new players a head start.

Another byproduct of the race is an excellent solo mode. The game is perfect for it since there isn’t much direct player interaction. You can easily add an AI scout that moves one space forward each turn. That’s it – the most elegant AI I’ve seen. Again, setting difficulty is super easy – you give yourself or the AI a head start.

The game starts out slowly, but you quickly pick up the pace. More resources, one or two new cards, and a dozen of Indians and you’ll be rocketing toward the Pacific. Sadly, the game ends just as you feel you’re engine is working full throttle, which is just a tad prematurely for my liking.

Not all is perfect with Lewis & Clark. The first thing may be a bit subjective and I’m curious how others saw it: the relationship towards Indians. I don’t mind the ones that are on the cards – they are considered fully-fledged people that can your expedition as anyone else.

But I found the way Indian worker meeples are treated dehumanizing and insulting. You’re pushing them around like resources or tools. From your boats to the village, to your co-players’ boats, back to the village, and so on. Also, you can visit the village on the same spot the whole game, while on the other hand, you are traversing the continent. The whole concept is a bit unfortunate.

I’ve already spoken about the lackluster deck-building. Luckily other game mechanics are there to help it out, but that doesn’t help it completely. The lack of useful cards is still a problem, making the long-term value of the game questionable.

You can alter the expedition path every setup, by adding more mountains (there are tiles included in the box), but it’s not enough. The village is always the same, you only ever add a couple of cards, so you figure out the optimal strategy pretty soon.

Despite the minor shortcomings, I enjoyed Lewis & Clark immensely. I am a sucker for historical themes, which was also the biggest reason I got the game in the first place. Combined with the gorgeous art, the presentation does not disappoint.

The mechanics are very solid, as well. Balancing your assets and optimizing moves was challenging and engaging, although it got old too soon.

But for an occasional historical race, I found Lewis & Clark perfect. It plays well with all player counts and can even be thought to casual gamers if they show interest.