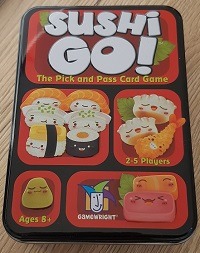 Sushi Go! is a simple card-drafting and set-collecting board game. But behind a deck of Japanese dishes-flavored deck of cards, lies an interesting game. In this Sushi Go! Review, and you will learn how the game is played, if it’s any good, and which edition is best suited for you.

If you’re a frequent reader of my blog, you may be aware that I have a 4yo daughter, who is very eager to get into board gaming. While she can’t comprehend more complex games (she’d disagree, of course), I often try to indulge her with games suitable for her age, albeit with some guidance.

Zombie Kidz Evolution was one such title. We finished the campaign and had a blast with it. Although it’s slightly too much for a 4yo, with some guidance, she was able to play and enjoy it immensely.

So I wanted to get into competitive waters next but do so with a game where I wouldn’t have to hold her by her hand. She should make her own decisions, even if they’re not going to win the game and I can focus on my own game.

While I didn’t have a title with such properties ready straight from my head, I immediately saw the potential when I was writing about Sushi Go Party! in my Christmas gift-buying guide.

I decided to go for its even simpler older brother, Sushi Go!. You take one card and pass the other to the next player. Easy as pie.

Japanese things just have the coolest-sounding names, don’t they? Whether we’re talking about weapons like Katana or Wakizashi, clothing like Kimono, or in this case, food.

Sushi Go!, as the name suggests, is about sushi and other accompanying dishes (the list is below), traveling around the room on a conveyor belt, which is actually how sushi is served in certain restaurants. You’re sitting around the conveyor belt, acquiring dishes. Dishes interact with each other in different ways – some like to be stacked, others used as a pre-course.

Your task is to compose a high-scoring dish of the ones you collect. After three rounds, the person with the highest score wins.

The game starts with shuffling the deck of 108 cards – which is not the easiest task in the world. The cards themselves are also not the highest quality, so expect some wear.

Then, each player is dealt a hand of cards (the number depends on the player count). With each turn, you will select one card, place it in front of you, and pass the hand to your player on the left/right (the direction changes between rounds).

When you run out of cards, the dishes are scored, and the whole process repeats two more times. The game is finished with the end-scoring of the Puddings.

All this Sushi is making me thirsty

Where it gets tricky are the various scoring opportunities, multipliers, bonuses, and dish co-dependencies. Let’s see what cards are available:

Some more thoughts about the gameplay

There is just enough variety to give you the chance to make a plan, yet not enough to create a chaotic mess or induce analysis paralysis. The rounds pass by super fast and the whole atmosphere is friendly and easy-going. I had fun even if I hadn’t won.

The accessibility is through the roof and if there’s a game I would put on a table full of non-gamers, Sushi Go! would be high on the list.

When it comes to more demanding players, the value of the game is limited. Yes, you can perfect your strategy based on card counting and what other players are doing, but this only goes so far. For a long-term challenge, there just isn’t enough variety and strategic values.

This is somewhat fixed in the (just slightly) more complex Sushi Go Party! that features more dishes, but it’s still an entry-level board game.

But for kids and non-gamers, this game is a blast. My 4 yo absolutely loves it. She can play on her own – although she’s not likely to win any games, she’s learning how dishes work with one another, and, most important, we’re having a ton of fun as a family with it. That alone is worth the “sacrifice” of playing a simpler game now and then.

Sushi Go! is a great game if you take it for what it is. A good entry-level card-drafting game, which anyone can pick up and play in a matter of minutes. It’s great for young kids and non-gamers. Even hardcore gamers will enjoy its mechanics and playful theme from time to time.

There are two other games in the same family. The aforementioned Sushi Go Party! offers more variability and replay value, but it also creates more cards that you have to learn. While this is still a very easy thing to do, I reckoned it would be too much for our daughter, so I decided against it (also it wasn’t available at the moment of purchase).

The latest game in the series is Sushi Roll, which ditches the cards and uses dice instead. Other than that, all three games share very similar principles.

As a buying guide, I recommend Sushi Go Party!, just because of the extra variability. It contains all the cards from Sushi Go!, so theoretically it could be stripped down to that level. It is slightly more expensive, though. 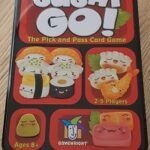