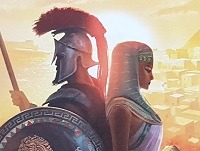 In this article, you can read my 7 Wonders Duel Review, a highly praised 2-player card-drafting game.

In 2010, 7 Wonders was released and it quickly became a hit among board gamers. It’s a card drafting game set in an ancient world. You collect resources, expand your civilization with buildings, and eventually, you can build one of the 7 Wonders of the ancient world.

The rules were simple and the drafting mechanics worked great at “family” numbers, which are 3, 4, and 5. But the game lacked a proper 2-player mode. The “take a card and pass the deck on”, as well as the game’s trading and combat mechanics, just didn’t work with just two people.

So, for the 2015 release of 7 Wonders Duel, Bauza and Cathala reworked the draft and made a few other changes to make the game a 2 player only. You no longer pass the cards around – instead the cards are now laid down on the table and you draw them alternately.

The game became another hit and is currently ranked 19 overall on BGG’s list, surpassing its father by 64 places. It’s second in 2-players only board games (only behind Twilight Struggle). A little late to the party, but still a must-buy for me and my partner, avid 2-player games players. 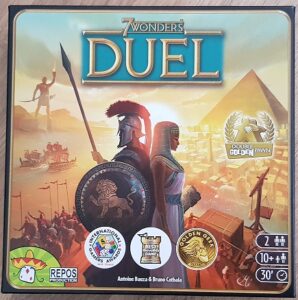 7 Wonders Duel is a small game (it’s also pretty cheap) and it doesn’t come with a lot of components. There is the cardboard military board, progress tokens, 31 cardboard coins, and one plastic conflict pawn (which acts as a marker on the military board).

The main protagonists are the cards. First, the 12 larger Wonder cards and secondly, 73 smaller Age cards. Next to the rulebook is a handy cheat sheet and a scorebook. The cards are small in size. Although at times a bit clumsy to handle, I didn’t experience any major problems with them.

Now the fun part begins – selecting Wonders. 4 random Wonders are placed face-up and the first player picks one, the second player picks two, and the last Wonder goes to player one. The process is repeated one more time, with roles reversed. Each player now has 4 Wonders in front of them, which he can build during the game.

Each player takes 7 coins as their starting capital. 20 Age I cards are then laid out on the table in a predetermined pattern (see pictures) and the player alternate drawing cards. The process is then repeated with Age II and III cards, but with changing patterns.

How Is 7 Wonders Duel Played

On your turn, you will choose one of the accessible cards. Only cards that aren’t covered by others are accessible. Then, you have three options:

Constructing a building is the most common thing to do. This will place the building in your city and from then onwards, you will have access to its benefits.

Basic buildings like Clay Pool, Logging Camps, Glassworks and others produce resources, which are needed for the construction of more advanced buildings and wonders. Other buildings give you the option to trade cheaply, move the conflict pawn, give scientific symbols, or victory points directly.

Building a Wonder is similar. The cost of a Wonder is on the wonder card itself, an age card is needed just to be tucked under it – marking that a Wonder is now constructed. Wonders are more expensive than regular buildings but give higher rewards. Moreover, only 7 can be built – the eighth is discarded, so there’s always a bit of a race going.

When constructing, you must often pay for the building, either in resources or money. If you don’t have enough resources, you can buy them from the bank, but the price increases depending on how many cards of that resource the opponent has.

There’s also an option of “chain-building”. Some buildings come with symbols that grant a free build of a related building from the later era.

If you can’t afford any of the above, taking a card and discarding it for money is your only option.

There are 3 ways to win the game.

The Military buildings and Wonders will move the Conflict marker back and forth. If at any point this marker reaches one of the ends (your opponent’s capital), you win immediately.

But even if this doesn’t happen, it’s still beneficial to move the Conflict pawn as it will grant victory points and may even destroy some of the opponent’s coins.

The second way to win is Scientific. There are 7 different scientific symbols in the game (six are on science cards, and one is on a Progress token). If you collect 6 different symbols, you win immediately.

It’s worth collecting symbols even if you don’t go for a Scientific victory. Each time you gather a pair of identical symbols, you can choose one of the Progress tokens on the board. Progress tokens are yours to keep and offer special powers, like discounts when building, extra victory points, more money, and so on. One of them even grants you an additional scientific symbol.

If all else fails, the Civilian victory is calculated when the last card is drawn. This is just a fancy name for summing together victory points from the military board, buildings, Wonders, Progress tokens, and coins. The player with the most points wins.

So, how does it feel to play 7 Wonders Duel?

Let’s get obvious of the way – 7 Wonders Duel is a great game. It’s probably our most-played 2-player game and we really enjoy it.

Cards are small with important information at the top. You can elegantly stack related cards with the minimum required tablespace. You don’t notice the exact illustrations during the gameplay, but you notice the colorful vibe, which takes you back to ancient times. 7 Wonders is a pretty game. It’s not a slave to the art style, but the art style works excellently together with game mechanics and components.

The rules are really easy to understand. The symbols for resources and other icons are mostly intuitive and easy to spot. This means that the game runs smoothly and rarer symbols are clearly explained on the Helpsheet. The Rulebook is okay, but I have found some uncertainties, probably a result of translation. A check from another editor wouldn’t hurt it.

Moving through the Ages, you feel the progress you’re making. In Age I, you’ll start with basic resource buildings and weak military, scientific, and trade buildings. By Age III, you’ll have a powerful resource-producing city going, and mighty buildings will be easy to build. You can move the Conflict marker 3 or even 4 spaces with some buildings (compared to just one in Age I).

Wonders are the cherry on top. They’re not overly expensive to build – usually, they’re completed in Age I or II. But the rewards they offer are great: discarding opponent’s cards, taking another turn immediately, moving the Conflict pawn, providing resources, coins, or just outright victory points. 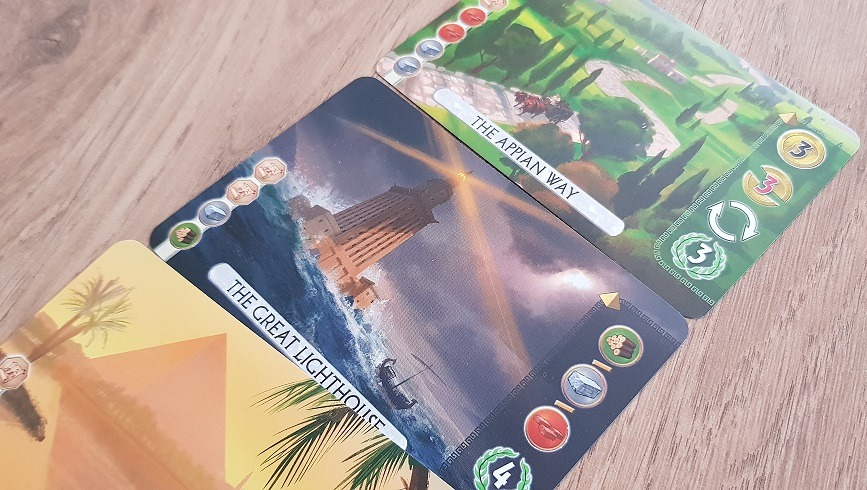 They can be the difference between winning and losing. Choosing them carefully and building all four should be your top priority. You don’t want to be the one with only 3 Wonders, although it’s not so detrimental, that you would be out of contention for victory. You can still win, you just have to focus on other areas.

Games usually play out to the very end and the points are calculated. So it’s normally about collecting victory points and mitigating military victory.

But that doesn’t mean it can’t happen. A combination of the Strategy Progress token and powerful Age III military cards can quickly end a game. Scientific victory, on the other hand, is rarer. It usually occurs when one of the players tunnel-visions on other objectives, leaving green cards to the other player freely. The Progress tokens are also very useful though, so the science part is not something you should overlook.

This all produces very balanced gameplay – neglect an area and leave those cards to your opponent and he will punish you. It’s a combination of little things that will bring victory: wise choice of Wonders, drawing the right cards (not exposing powerful cards to your opponent), and so on.

There’s plenty of variety in the game setup – only 20 out of 23 cards for a certain era are used, not to mention the various Wonders and Progress tokens. You never know what is hiding in face-down cards and you cannot plan on getting one specific card – you don’t even know if it’s in play! The games play out quite differently from one another and the replay value is high.

I only have a few negative things to say, and it’s mostly nitpicking, not a serious issue at all. Some stages of the game feel a bit deterministic – it’s obvious which card is best to take and the game plays by itself.

And last, the guild cards (that you shuffle into Age III cards) are not very exciting. Yes, they can bring powerful bonuses, but it’s the one part where icons and symbols are not intuitive.

Two larger expansions are available. I have done detailed reviews of both:

7 Wonder Duel is highly awarded and rightly considered one of the all-time 2-player greats. There’s player interaction, the game runs smoothly, your choices matter, and is genuinely a delicious experience.

I can only recommend it and it’s especially well-suited for couples. The expansions seem to hit just the right spots and add a lot of interesting features (although I prefer to play the vanilla game). The very affordable price is the final piece of the puzzle of the must-have board game. 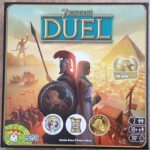