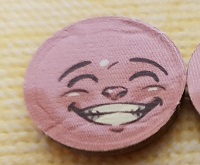 Not everything is about looks – Santa Maria is a board game proving this 100%. Read what it has to show beneath the surface.

With the number of board games flooding the market each year, it’s inevitable that some games will fly under the radar for one reason or the other. One of those games is Santa Maria, a mixture of dice and tile placement, as well as set-collecting. While the game offers an intriguing puzzle, the presentation is a little rough around the edges. But that’s also why the game was available for a bargain price and I decided it was worth a try. 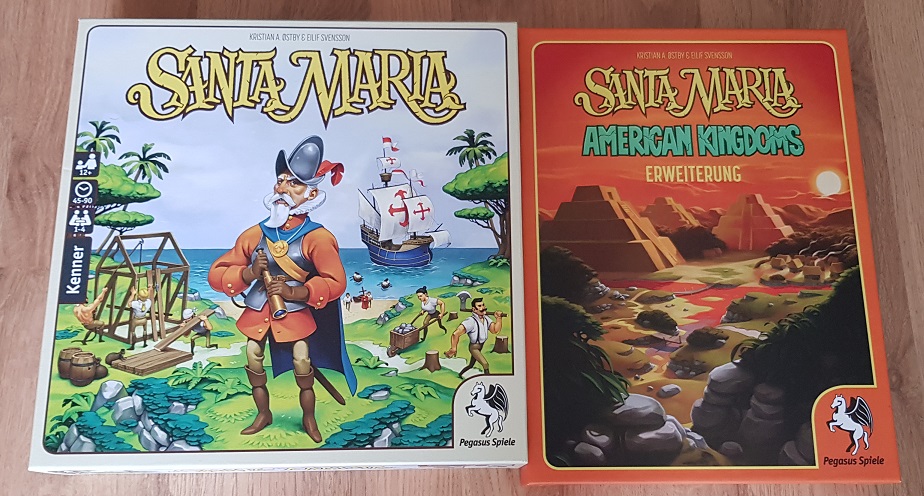 Unfortunately, Santa Maria’s main shortcoming is also the one that is the most obvious. Thematically, you’re colonizing the Americas, exploiting the lands (and natives) for resources, and shipping them (the resources, not the natives) back to Europe.

Not only have we seen the plot a hundred times, but it’s also a delicate topic, as a lot of bad things happened to a lot of people. While the manual tries to illuminate the problem with a couple of paragraphs of historical background text, the game mechanics show little respect for the exploitation of land and people.

The presentation follows similar sub-par guidelines. All right, the components are your typical euro – cardboard and wood. Just as we like them, and the wooden resources particularly are lovely. But the all-around graphical style and layout are not the prettiest.

The fonts and colors are off and don’t even get me started with the victory point tokens (happy faces), which are disgusting and impractical. Honestly, I’m not a fan of the art style as well, but that might be more about personal preference.

Overall, the presentation gets the job done – the game is playable and the iconography is more or less what you expect it to be. But the game won’t turn heads and the looks won’t be the reason people want to play (or buy) Santa Maria.

Luckily, here’s where the bad news ends. The rulebook explains the gameplay principles well, and the game is not hard to teach and learn. The mechanics are quite intuitive, the only issue I had was the iconography on scholar/bishop tiles, which took a while to grasp. Fortunately, they are explained in the appendix.

As mentioned in the beginning, Santa Maria is a delightful mixture of several game mechanics. You’ll buy and place polyomino tile to expand your colony (increasing your number of action slots). You’ll use money or dice to activate those action points, earning various resources and other bonuses along the way.

These include advancement on the religion and conquistador tracks, as well as the option to ship goods back home. Religion track allows you to activate special abilities and scoring objectives, conquistadors are a competitive track against other players, while the shipping is a very lucrative source of victory points.

The game lasts for three rounds and you can take any number of turns in each round until you decide to pass. This usually happens when you run out of resources. You can take 4 different actions:

If you use coins to activate a slot, it’s blocked for the remainder of the round. On the other hand, if you use a die, only the last slot in the row (or column) remains blocked. In addition to the points accumulated during the game, in the end, you get extra points for completed rows/columns, shipping tiles, and bishop objectives. 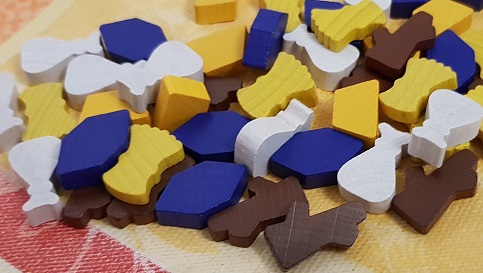 Santa Maria presents a fascinating puzzle, that seems quite easy at first. Expand your colony, so that you have many action slots available for activation. Use money and dice to maximize them, so that you get many rewards while activating them. Collect resources to further expand and ship the rest back home for points.

Meanwhile, use your monks to activate abilities and objectives that will be in synergy with your strategy. It’s the activation part that is the tricky and most interesting bit.

Figuring out the order and timing in which to activate using a combination of coins and dice to get the resources you need for shipping and further tile placing, is the core of Santa Maria’s gameplay.

After you add in the randomness in dice, competition for communal dice, and all the different abilities, objectives, and shipping tiles, you get a juicy brain burner puzzle. It gives you plenty of material to think about. Not so much that it would overwhelm you or slow down the game, but just enough so that you feel clever when you figure out a good move.

The board state doesn’t change much from turn to turn, allowing you to think things through when other players are making their moves. This goes hand in hand with low player interaction. Santa Maria is a multiplayer solitaire game and often you won’t even raise your head to see what others are doing. The result is smooth and fast gameplay, with a very high ratio of crunchy decisions vs playtime.

Although the game scales nicely to all player counts, the low player vs player interaction suggests you get more bang for your time at lower numbers, even in solo mode. Although it’s a simple high-score chase, it’s challenging and fun, and there are different objectives and titles you can achieve.

Moreover, the rules are entirely the same as in multiplayer and you can squeeze the game into 30 minutes.

When doing a review, I typically do around half a dozen playthroughs, so this category is always tough to judge. The puzzle on offer is medium weight in complexity and that seems spot on. Not that complex to keep you up at night, yet enough to offer you a great time every time you pull it from the shelf.

And also simple enough, to allow you to jump right back into it after you haven’t played in a while, with minimal rules re-learning. Therefore I would rate the long-term appeal as medium. Although setup offers decent variability, games are not that different from one another. I can see myself playing the game from time to time.

Normally, I’d end the review here, but I’ve mentioned in the beginning that the price for Santa Maria was very favorable. In fact, it came bundled with the American Kingdoms expansion, so a few words about it are in order.

The expansion includes new bishop, scholar tiles, and shipping tiles. Next, there are modules you can include in your games:

These modules are basically adding complexity to the main puzzle. They are a great way to spice things up and give you more things to consider. But the largest module by far is the Mayan city, a whole new board, which allows one player to play as the natives. Mayans come with their own set of rules and are meant to be played by an experienced player.

You’re still activating tiles with dice, only this time you’re moving them along roads. And instead of shipping, you now use resources to build pyramids. While the balance compared to regular player boards is a bit off (with Mayans having a harder time – sounds historically accurate), the game mechanics are more thematic (stealing gold from Mayans, free PvP trading, or constructing pyramid temples) and changed just the right amount that everyone will want to play as the Mayans eventually.

Sure, it’s not perfect for competitive play, but kudos to the developer for telling the other side of the story, and making it thematically more appealing (and connected with the mechanics) than the base game.

Santa Maria is a very fun and challenging game, albeit it’s a bit malnourished, theme and appearance-wise. The American Kingdom expansion solves some of those issues and adds a lot more variety. If you browse the second-hand board gaming market and stumble upon Santa Maria, I encourage you to go ahead and buy it. You won’t regret it. 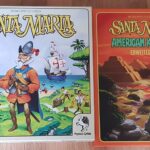