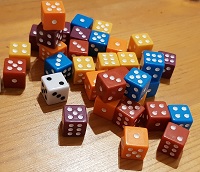 Modern board games often used complex dice mechanics to perform actions. In the following article, find out which are the best dice placement board games in 2022. Which one placed first?

Introduction to Best Dice Placement Board Games in 2022

If there’s one component everyone associates with board gaming, it’s dice. But modern board games have come a long way from the simple roll-and-move most people are familiar with. The board games of today use dice in cleverer ways.

In the following list, there are 10 best board games that use dice as workers, to select actions, to determine future actions or various combinations of those.

The London World Fair of 1851 is just around the corner and your nation is one of the main presenters there. With the help of famous historical (and fictional) characters, you need to prepare inventions that will create buzz across the world and stun visitors.

Crystal Palace is a fairly complex game with a lot of moving parts. The dice-placement is a mechanism that binds everything together, but there are numerous tracks that can give (or take) points, resources, patents, inventors. etc.

This is certainly a game for heavier gamers that are unafraid of tackling its complex mechanisms and its slightly mean nature. Crystal Palace will throw everything at you, and only the most resilient players will be up for the task!

Congratulations! Humanity has populated the orbit of a mysterious alien planet. But the job is not done yet. While the planet below looks void now, the remains of a once-great alien civilization are waiting to be discovered and used to your advantage.

Your fleet of spaceships is represented by the dice you possess. You’ll assign them to various orbital facilities to perform actions. Collect resources, discover technologies, add more dice, colonize the planet, and so on.

You’ll spread your influence on the facilities and planet terrain to get the most out of your actions, and you’ll explore ancient artifacts, which will grant you powerful special abilities in the form of alien technology.

Alien Frontiers is an accessible, medium complexity board game, that caters to sci-fi lovers of all ranges. From families to more serious gamers, there is something for everyone in here.

When it comes to dice placement, Stefan Feld is definitely a leading designer (hint: game at number 1). Bora Bora from 2013 takes place in a tropical theme, with your tribe looking to settle, fish, collect shells, and cherish the Gods.

Although you only have three dice to place each round, there will be a lot of tough decisions to be made. Do you place a higher value dice to take a better version of the action, or a lower value, just to block the space to your opponents?

Actions range from placing huts on the islands, expanding over land and water, and completing regions. You can also hire helpers, place tokens at temples, or construct buildings. If your hands are tied, you can always go fish, or use a God card to break a rule.

There are public and personal objectives around which players form their strategies and form synergies using their actions.

Bora Bora is a beautiful game, that features great tactical and strategic depth. Its core dice placement mechanism is one of the best and most interesting in the genre, providing a lot of replay value. Although it’s quite complex, it’s definitely worth getting into.

If you, like me, had the privilege to see Moscow’s St.Basil cathedral in person, you’ve surely been impressed by its glory. If not, you can witness a fraction of it in this board game. It’s the time of Ivan the Terrible and you (together with other players) have been contracted to complete the cathedral as soon as possible.

You’ll collect resources, send them to the construction sections, and construct the cathedral itself. Section by section. The central rondel is where you select the actions by choosing dice of a specific color and number. The dice you choose dictate where on the rondel you’ll move next, making the choice very strategically important.

The Red Cathedral is one of those games that offers both accessible gameplay and complex meaningful choices. It’s about optimizing your choices, and the gorgeous presence and well-implemented theme certainly help promote it.

Do you remember Space Invaders, a legendary video game from the eighties? The enemies descended from their mothership at the top of the screen and slowly descended down towards you. There was you, the lonely guardian, frantically moving left and right, hiding under scarce cover and shooting upwards, trying to destroy the oncoming menace.

Under Falling Skies is Space Invaders, adapted for board gaming. The premise is very similar, but now you also have underground bunkers that you use for research and supply. The action is of course dictated by using dice – the higher-numbered dice grant more powerful actions, but cause enemy ships to descend faster.

Is Under Falling Skies replayable? – Read the full review here

What makes Under Falling Skies special, is that it’s a strictly solo experience and that the missions are connected and form a campaign. It has been one of the most well-received titles of 2020 and has quickly hopped onto the best solo board games lists, as well. And with its low price, there’s no excuse to miss Under Falling Skies.

A patron of Renaissance culture, Lorenzo de’ Medici sponsored artists such as Michelangelo and Botticelli. He was a politician, diplomat, statesman, and banker at the height of the Florentine Republic. His great deeds made him known also as Lorenzo the Magnificent.

In the Lorenzo il Magnifico board game, you are the head of a noble family during the 15th Century, trying to match Lorenzo’s glory. You send your family members into different areas of Florence to collect resources and development cards (representing new territories and buildings) and manage your assets.

Your family members are represented with dice – the higher the number, the more efficient that member is. He can obtain cards higher up on the offer or activate more cards in your city, making production more effective.

There is a strong engine-building element involved with obtaining and “running” your cards, with the end result of transforming your resources into valuable prestige (victory points). But you must also not neglect the military and Church relation track (or you might suffer ex-communication!).

Although, in the end, the theme ends up a bit dry, Lorenzo il Magnifico is a great combination of dice placement and engine building.

Troyes, one of the more often mispronounced board games, sports a generic medieval theme. It’s based in the historic city of Troyes (pronounced “twah) in France. While the theme is not the most original, the artwork, particularly the images on the cards, are outstanding and typically medieval-ish.

A plethora of dice represents various segments of the population, controlled by powerful families (players). You’ll accumulate victory points by advancing your influence in the military, clergy, and civil spheres.

For actions, the players can use their own dice or buy opponents’ dice, making the placement part highly interactive and tactical. The actions will eventually translate resources such as influence and money into victory points, with a strong emphasis on activity cards, that are added to the board during the game.

After more than a decade since its initial release, Troyes has stood the test of time as one of the best dice-placement board games, and is still well-worth of purchase and play.

Untouched from the outside, the Aztec civilization thrived in per-Columbian Central America. Rich in astronomical knowledge, cultural and religious heritage, it built mighty pyramids and sacrificed many souls to appease the glorious gods in the skies.

This is the setting the creators of Teotihuacan: City of Gods chose for their game. Each player controls a group of dice (your workers), moving them around the board, performing actions. Your workers will become more powerful over time, and with the elegant game flow, the three ages will go by smoothly.

There are many things to do: research new technologies, advance on the temple tracks, and build houses. Or even contribute building blocks to the mighty Pyramid of the Sun, located in the centre of the board, and watch it grow in 3D.

Teotihuacan is a complex game with a lot of moving parts, but when you get a hang of it, its depth will start to reveal, introducing a great worker placement game with a unique theme.

2 The Voyages of Marco Polo & Marco Polo II: In the Service of the Khan

In 1271, a young Venetian explorer named Marco Polo set out on a journey towards the east. Traveling through the Mongolian empire at the height of its power, he reached Beijing (along with his father and brother) in 1275.

There he stayed in service of Kublai Khan, eventually bringing back to Europe many trade links and revolutionary ideas, such as paper.

You can relive the journey through the two board games in the title. The original title is focused on his first voyage to the east, while the sequel starts in Beijing and lets you travel west.

Each round, you’ll have several dice at your disposal, which you can use to travel the map, establish trading posts, trade for goods, and fulfill lucrative contracts.

Want to explore the American West instead? Lewis & Clark is your game.

In addition to Marco Polo, multiple characters are available, each with his own game-breaking ability, making Marco Polo an asymmetrical game.

The game mechanics work great with the theme, making this a strategy game, that doesn’t use its theme as an afterthought, but it’s built around it. If historical terms such as Silk Road, Mongols, and the Far East intrigue you, you will have a blast.

1. The Castles of Burgundy

Set in the Kingdom of Burgundy, the theme in this game is merely an excuse to place various types of terrain into your estate and score those juicy victory points. There are six terrain types and each can be filled with various buildings, knowledge tiles, mines, ships, animals, or castles.

Each turn, you’ll roll two dice, which will represent your two actions for the turn. According to the number, you can take tiles from the central offer and place them into your estate. Castles grant free actions, knowledge tiles grant ongoing abilities, animals yield points, ships import goods, and mines yield gold. Then there are city buildings, that come with abilities, that allow you to chain actions (take a free tile, place tile for free, etc.).

As you complete a group of tiles, you’ll earn points, but there is more than one way to win Castles of Burgundy. You can go animal-heavy strategy for some big points, focus on buildings and their abilities, or maybe sell as many goods from the ship tiles.

All (and combinations of them) are viable strategies. To top it off, there are several different player boards, requiring a new approach, competition for tiles and turn order, and so on.

Simple to play, yet offering immense strategic and tactical depths, Castles of Burgundy is rightfully among the top board games of all time.