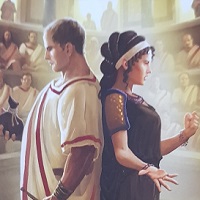 This is a review of Agora, the second expansion for the highly-rated two-player board game, 7 Wonders: Duel. Is it a mandatory or optional addition?

7 Wonders: Duel is a spin-off from one of the most popular card-drafting board games, 7 Wonders. Specifically designed for two players, its medium complexity offers both accessibility and depth. The sense of progression and city-building is immersive, while the card-drafting requires you to consider many factors from both sides of the table.

Agora is the second expansion to it. After the God-powers-flavored Pantheon, it introduces a more methodical, political approach to take-that mechanics. I’ve had it on my shelf for almost a year now, but because our first gameplay of it wasn’t overly exciting, it was also the only one.

Since we’ve just pimped our 7 Wonder: Duel collection with a Folded Space insert, this seemed a perfect opportunity to give Agora another chance.

How the base game played

The meta of the 7 Wonders: Duel base game revolved around building your city, so it could provide enough resources to construct wonders, points-scoring blue cards, scientific, and military cards. The majority of the player interaction came from the tableau where you alternately drew the cards from.

Not only did it matter what you need, but you also had to take into account what your opponent needs or is aiming for and then possibly deny him that card or open a different part of the tableau.

Other than a few wonders that allowed you to discard a built resource card from an opponent’s city, there was no direct player interaction.

How the Pantheon expansion played

The Pantheon expanded on that aspect. With a collection of Gods from different ancient mythologies, it introduced powerful one-time abilities, that you could trigger if played right and could hurt your opponent significantly (stealing resource cards, stealing money, or even stealing Wonders).

More peaceful gods were included as well, and their abilities were also satisfying (granting coins, victory points, progress tokens, shields, etc.). With two new thematically appropriate wonders, it made the game very enjoyable to play and it felt like the missing piece of the puzzle. In my review, I proclaimed it a mandatory addition. 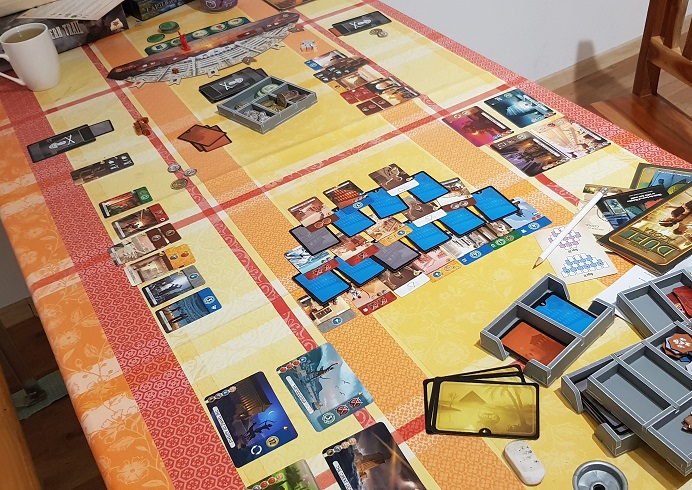 What does Agora add to the mix?

A senate board that attaches to the base game board from below and is a space where you contest for political influence over six sectors. Influence is tracked by placing lovely influence cubes.

Controlling a sector will grant an ongoing bonus, called Decree. 16 Decrees are included, with 6 of them use per game. Bonuses range from taking coins when a certain color of card is constructed, discounts for construction, getting extra coins when discarding, etc.

Controlling a sector will also grant VP’s at the end of the game.

Placing and moving the influence is done by recruiting senators, which are a new type of card that is placed in the offer tableau with the rest of the cards.

There are also Conspirator Senators, which allow you to draw and prepare Conspiracy cards. These are one-time use abilities, i.e. placing extra influence cubes, removing opponent’s cubes, making your opponent lose money, blue, or yellow cards, stealing cards, adding extra decrees, and even removing Wonders from the game.

Agora is an excellently designed expansion. The new features fit right in and perfectly with the rest of the mechanics. The iconography and graphical design are spot-on, the new mechanisms feel intuitive and the influence cubes are a joy to handle.

But despite all the fundaments for Agora being rock-solid, it did not make me excited. I did not dislike it and would gladly play again, but there are some issues I had with it that made me enjoy it less than the base game or Pantheon (I would much rather play any of those two).

To be perfectly frank, these are mainly subjective and might just be the reason why someone else likes it.

I don’t like the political theming too much. While the Gods were exciting, fun, and something we associate ancient myths with, the politics are just too much like real life. Plain, boring, and unexciting.

The Decrees are quite potent and grant bonuses all the time, but they’re easy to forget about. Suddenly you have Progress tokens to take account into, Decrees, and occasional other bonuses, and it’s a chore to track all of it. Often you won’t remember to take an appropriate bonus coin, for example.

The Conspiracy cards were a letdown for us. Although there are some powerful ones in there, you’ll probably prepare only one or two per game. Rarely will the drawn cards be the ones you want or would benefit you the most. Most often, they’ll be something mediocre, that will make you question whether it was worth spending a turn preparing it.

Maybe we just were unlucky with the Conspiracy cards draw or the draw two – keep one is mechanism is not strong enough. Probably a bit more testing would be needed and possibly a house rule to draw three-keep one.

Finally, my main issue with Agora is, that it detracts from the city-building experience that made the franchise so enjoyable. Indeed this was also present with Pantheon, but it’s even more prevalent with Agora.

There’s a lot less emphasis on building the city, its Wonders, or the military track. Scientific victory and Progress tokens? Totally cut off from the game. Carefully building up your resource portfolio? Nah, just discard the card and spend the money on politics.

Again, these are not negatives directed at a game design. This is still top-notch and if you’re shaking you’re head reading this, perhaps these will be exactly what will make you love the expansion.

What I0m trying to say is that Agora delivers a very different experience compared to the base game.

Contributing to the praise of excellent design is the fact that you can play with both expansions, although I didn’t particularly like it. It deludes the civ-building aspect even more, and there’s just too much stuff to do and keep track of.

It also makes the game too complex (or bloated) for what it was primarily meant to be, a casual medium-weight two-player experience. You’d have to play several games just to develop a reasonable strategy of where to advance and how to play.

It would take a dedicated pair of players to get the best out of that, and I’m sure one exists. But on the other side, if you’re that much into board gaming, you’d get much more enjoyment from spending a portion of this time on other games.

While the 7 Wonders: Duel base game comes with a solid insert to fit its components and both expansions do the same, the increase of component quantity means you’ll have to store them in three different boxes. This makes setup and teardown an unenjoyable chore and makes you less likely to bring the game to the table.

Another issue with all the components that the expansion add is the lack of proper trays to use during the game. You don’t always need everything, so scattering it all over the table just increases the mess and makes the playing difficult and chaotic.

That’s also one of the reasons we haven’t played much of 7 Wonders and why I wanted to upgrade it with a proper insert and store all of the contents in the same box. 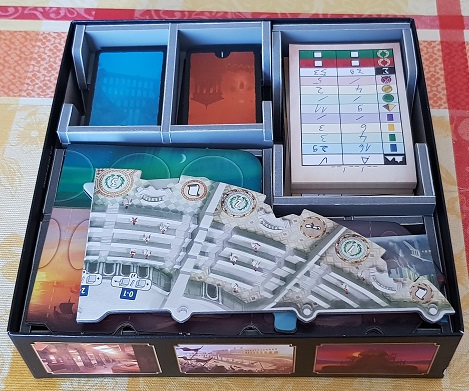 When it comes to inserts, few can compete with the value for money of Folded Space. They make their insert out of precision-cut Evacore foam, which guarantees a lightweight, yet durable product. The inserts are simple to assemble, fit in the box perfectly and the component layout is such, that it helps a lot with the setup and during the gameplay.

Everything above is true for the 7 Wonders: Duel (revised edition) insert. All the base game content plus both expansions, everything is now packed neatly in the base box. The tokens, cards, and coins are separated by type, allowing for easy access during the gameplay. There’s also space for all three boards and rulebooks.

The only issue is that the larger cards (Wonders, Conspiracies, Gods, etc.) are all put in the same tray, together with reference cards and scoring pads. Ideally, they would be separated by base game content and expansions, but there isn’t any space left in the box, so I understand why they had to place them together.

Despite this, I would rate the Folded Space insert a mandatory addition to your 7 Wonders: Duel collection and definitely something that eases the playing by a large margin. I don’t think it’s necessary if you only have one expansion, but if you have both, it definitely is.

Agora for 7 Wonders: Duel is a well-designed expansion. It’s not for everyone, because it changes the overall game feel a lot. While the politics haven’t excited me too much, I know that a lot of players love the new features and enjoy every moment of it.

While I believe everyone should add Pantheon, Agora is an expansion I’ll mark as optional. Hopefully, after reading this review, you can tell if you’ll enjoy it.

It’s worth adding that with both expansions, you’ll also need to look for a proper storage solution, as holding everything in three separate boxes is pretty awkward. 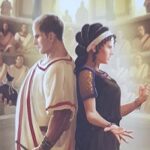