If you wondered whether you should buy the expansion for Underwater Cities, you will find your answer in this article. Also, a detailed overview of the contents, including new player boards and gameplay modules.

Do You Need New Discoveries Expansion For Underwater Cities?

New Discoveries is an excellent expansion to the already very good game, Underwater Cities. But, even though the new player boards and game modes are lovely additions, I only recommend the expansion to the most dedicated fans of the game.

Underwater Cities is one of the more reputable strategy (euro) games. Although it featured an original theme, its implementation wasn’t the game’s strong point. Rather, excellent game mechanics, particularly the combination of card play and worker placement, were the thing that kept players coming back.

New Discoveries expansion doesn’t try to invent hot water. Instead, it focuses on things that were good and tries to further deepen and improve them. Besides the obvious triple-layered player boards, it’s comprised of modules and game modes, which you can (together with different board layouts) freely use in your games.

A review copy was provided by Delicious Games.

44 era cards are probably the most straightforward addition. You just shuffle them into their respective decks (there are cards for all three eras) and forget about them. Although there are some new cool abilities, most of them are pretty standard. They increase the variety but fit right in.

On top of those, there are also 8 new special cards, that add interesting new end-game scoring options. I won’t go into detail, but you can see some of them in the pictures.

The first optional module is the asymmetrical assistants. These replace the stock assistants and are more powerful. They are action cards, but they also have permanent special abilities or production bonuses. As such, they are a great addition to the game.

Working hand in hand with the assistants are the new starting resource tiles. If you use this module, you’ll get a huge starting boost, but you skip the entire first round. The idea is to cut the slow start of the game and start with a more developed board. Also, together with assistants, these allow you to specialize more.

Green metropolises are also a new addition. They work just as blue and brown, but they are used with metropolis race and certain player boards. Again, they increase the variety and offer new strategic options.

The museum is a new double-sided board that grants you a special bonus every time you cover a museum icon on one of the new player boards. As these bonuses are unique and some are clearly better than others, this module adds extra competition to the game. An alternative version of the museum is on the other side of the board.

Finally, the stars of the expansion (and the reason for its hefty price), the player boards. There are 16 playable layouts. Frankly, not all of them are new, since the original boards have been redone. But they are all triple-layered, playable on both sides with indents for cities and structures. There are also 4 layouts made specifically for the museum variant.

Needles to say, the variety and asymmetry in all of these are great, although there are arguments for some being more powerful than others. So for multiplayer games, choose carefully – use recommended sets.

The production value of the boards is fairly good and they’re a joy to play on, although I didn’t feel like sliding pieces were a big problem in the base game. Even if a piece accidentally got out of place, it was pretty obvious where it goes.

Finally, it’s worth adding that all the new components fit into the base box, so you don’t need to keep things separate.

These two modes utilize the new green metropolises (as well as the old blue and brown). The idea of the race is to have them in the middle of the table, and you can only place them when you complete a connection to them on your board. This increases player interaction, who now have one more thing to compete for.

Metropolis choice, on the other hand, is a different concept. The four new layouts feature icons for which colors are available and then you select your desired metropolises from that pool. This variant caters to those who want to specialize their engine and works particularly well in combination with new assistants and starting resource tiles. By the way, this combination is also the only way to play the expansion solo.

The new museum module is also available for only 4 layouts. Unfortunately, there’s no variant to play this mode in single-player – just like you still can’t add government contracts to it. I understand that both of these modules are meant to increase interaction and competitiveness, yet with some work, I think they could be made playable to solo players.

There are a lot of good things about the New Discoveries expansion. The new boards are the obvious ones, but the new game modules also improve the gameplay.

But here’s the thing. As cool and fancy as the new boards are, they represent the bulk of the price of the new expansion and don’t contribute to the gameplay. Gameplay modules, on the other hand, improve the gameplay and are a great addition, but the base game had rather excellent gameplay by itself.

In the end, as great as the expansion is, I can’t recommend it to everyone, particularly at its price point. Get it if you can’t live without the fancy boards, or if your group plays the game regularly and would therefore benefit from the added variety and player interaction the most.

>>> New Discoveries expansion is available on Amazon (US) and Philibert (EU) <<< 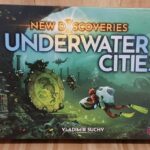