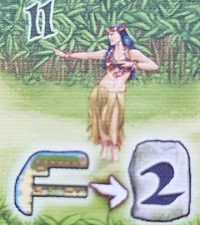 In this Hawaii Board Game Review, you can learn about a decade-old board game, that was once highly reputable. How has it aged? How does it play in 2021?

Introduction to Hawaii Board Game Review

Growing up under the communist boot, the word Hawaii meant paradise to us. A place to escape, a place where you are carefree and can enjoy life to the fullest. Things have changed a bit since then, but whenever I hear Hawaii, the reminiscences of childhood come back and I become subconsciously drawn to it.

It was the same when I saw a second-hand Hawaii board game on sale. With tropical scenery and wooden components, it looked fabulous in pictures. Unfortunately, I haven’t heard of the 2011 game before, but after a brief google search, I discovered it’s actually pretty decent as well.

So why has its star faded? What do I think about it after a few plays? Read on to find out (or skip to the conclusion). 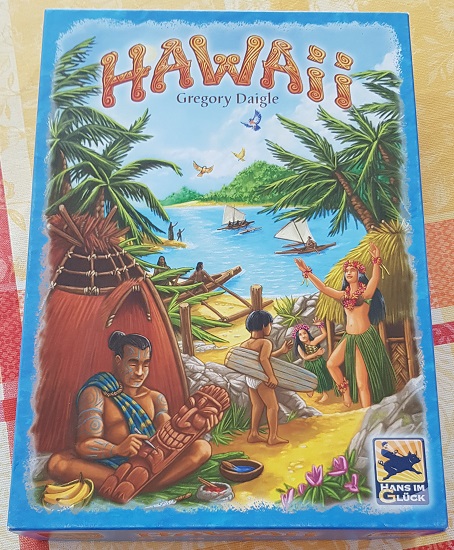 In Hawaii, you are the leader of a traditional Hawaiian tribe. Your goal is to build the most prominent village (or more of them) by adding various buildings and bonus tiles.

But to obtain new additions, you’ll have to manage your economy carefully. You need to gather enough shells to pay for construction, have enough moves to travel the island, and even boats, so you can go fish and visit neighboring islands to exploit their riches.

When it comes to components, Hawaii strikes right into my soft spot. Wooden meeples and resources are shaped and painted meticulously, while the overall scenery is rich in bright green and blue colors.

The main way to earn victory points in Hawaii is by adding tiles (buildings) to the villages on your board. Some give you more basic resources, some help earning extra points during the game, while others only come into play at the end-game scoring.

The concept itself is simple and once you start playing, you get a grasp on it immediately. But the problem is the rulebook, which doesn’t do the best job at explaining how the game works and which parts are actually important. I’ll try to summarize it better. 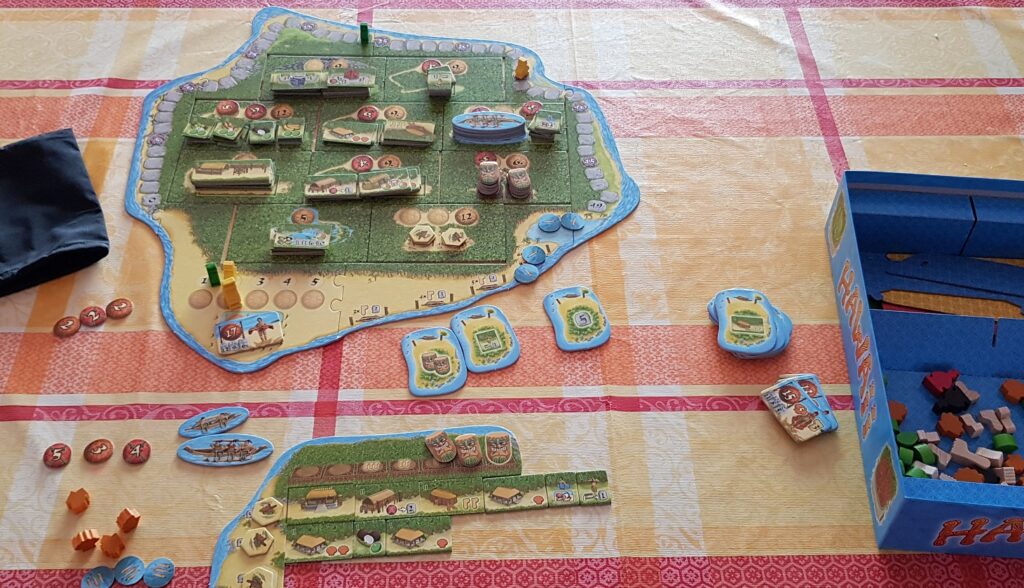 Setting the game up

After the board is set up and the purchasable tiles placed in their respective places, the pricing tokens are shuffled and placed next to tiles. These determine the price of the tiles and are reshuffled before each of the five rounds.

Actually setting up the pricing tokens is the most tedious job in Hawaii. They are small, placed next to stacks of tiles, and if you, like me, have big fingers and are a bit clumsy, you’ll knock stuff over all the time.

The shuffling also detracts from the gameplay. All right, if all players step up and scoop the tokens, the process can be sped up a bit, but doing it by myself was frustrating.

When it’s your turn, you can:

There are two basic resources. Moving costs feet, while buying tiles costs shells. The third resource, fruit is a joker, that can be used as both, but can’t be mixed, unless you have a certain hut.

When you buy a tile, you can pay the cost of the pricing tile and place it in your village. Or you can pay double the price and use the alternative, more powerful side of a building.

This is important because each round you must reach a certain threshold in pricing tokens to be eligible for scoring. If you spend all your shells on the more powerful side of buildings, you won’t have enough money left to get more tokens.

You can try to earn the missing points by fishing (which costs no shells, but you must pay feet instead) or you can end your round early and collect the bonus that way. It’s also possible to lower the threshold by buying special Surfer tiles.

The threshold also increases round by round and you get fewer resources from the game, so it’s vital to get your village up and running. You need it to generate shells, feet, and/or fruit, as well as add some Surfer tiles.

The turn order is variable. The earlier you are to claim the end of a round, the more options you will have when choosing the next round order and pricing tile bonus (which can help to reach the threshold). Being on turn earlier is beneficial, as there will be some very lucrative spots or islands revealed each round.

That’s because each round, the pricing tiles are returned and reshuffled, meaning the prices for buildings change every round. What was an expensive piece last round, can become the most-sought real estate this round.

Placing tiles onto your board

How you place the building in your corner-shaped board is also very important. Each row represents a village, and most tiles can be placed only once in a village. Some powerful scoring tile (Gods) can only be placed once per board.

Often you’ll be in a dilemma to have one large village or to start a new one, especially since the new one must reach a certain length to be eligible for end-game scoring. But behold, this length can also be reduced by special Tiki tiles.

How do you earn the all-important victory points?

All this creates very tight and co-dependant game mechanics. Everything in Hawaii affects something else and there are ways to mitigate it or intensify it. It all comes down to how you’re building your village.

When it comes to scoring, the game is a point-salad sort of. There are many ways to score, but that doesn’t mean that you should spread yourself around thin. It’s often better to focus your effort, usually around one or two powerful God tiles.

Do you have a God that gives extra points for boats and surfers? Why don’t you focus on producing more feet then, since you’ll be needing them to visit islands and reap their rewards? You’re not too worried about shells, since you can lower your threshold with surfers anyway.

If you use synergy wisely and compound their effect, you can really score some big points. Hula dancer gives 1 or 2 victory points for each building in its village. This may not be much in a 3 tile village – but what if you’re village is 10 tiles long? There’s no limit on how long a village can be.

Hawaii offers excellent strategic and tactical options, and as the situation changes (and tightens) each round, you must constantly adapt your approach. It will truly reward playing well with huge points hauls. On the other hand, if you’re not the most thinky player, you’ll have a hard time, especially since there’s almost no luck element to pull you back in contention.

Not all is rosy in paradise

So, thematically and mechanically wise, Hawaii is excellent. What prevented it from reaching a status of greatness and settling only as a good board game?

I’ve already mentioned the bad rulebook. It made me feel like I was reading a lawnmower manual. It creates a feeling that the game is far more complex than it really is, down to the line where you start doubting if you’ll ever be able to play it.

It has disgusted the game for me so much, it took over a month of shelf-time, before I took the game out again, even thinking about re-selling it in the meantime.
I can only guess how many potential players the game lost because of that.

The set-up and gameplay are very fiddly. The game wants you to place all the purchasable tiles onto the board (well over a hundred of them), which is a very clumsy and time-consuming job. Not to mention the constant re-shuffling of the tile price tokens.

With some experience and organization (you don’t need all the tiles for a 2-player game, for example) things can be sped up, but shuffling and placing the price tokens never felt enjoyable.

The game being so intricate and strategic, this is also a negative, when it comes to players wanting to play again. This is great for hardcore gamers, that will try to outsmart and outplay each other. But an average player will never win against a good player, making the experience much less fun for them.

Although the game works with all player counts, it’s not designed with a solo mode in mind. But that didn’t stop fans from creating such modes. I tried the one from Sky Zero, which uses a simple token-removal system to simulate your opponent.

The system works really well and can be adjusted for difficulty, although the rules could perhaps use a bit of clarification or a turn-order chart, as there’s some ambiguity.

The only problem I had with the solo mode is that the fiddliness is even more pronounced that way. Setting up and shuffling the tokens takes more time than actually playing the game, thus making the whole experience not enjoyable.

Verdict: Good, but not great

Hawaii is mechanically speaking, a top-notch eurogame. It offers almost infinite variability and constantly adjusting your strategy is needed to perform well. It will suit players looking for a challenge.

The theme itself is well implemented and works hand-in-hand with game mechanics. You’re a chief, wandering around an island, taking care of your village. Not to mention the whole thing looks great on the table.

But I also understand why the game’s shortcomings prevented it from reaching greatness. Still, if you haven’t played before, Hawaii is a good second-hand acquisition if you find it somewhere.