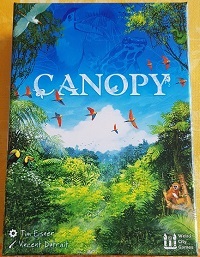 In this article, you can read about Canopy, a beautiful card-drafting game set in dense tropical rainforest. Read the full Canopy Board Game Review below.

Introduction to Canopy Board Game Review

Welcome to the tropical rainforest, the richest ecosystem on the planet! Rain, sunlight, tall trees, lush vegetation, and free-roaming wildlife all work in harmony to create the most prosperous rainforest around.

But beware of threats such as drought, fire, and disease, as they can destroy your efforts in a heartbeat!

Welcome to Canopy, a 2-player card-drafting game where you build your own rainforest.

Already at the beginning, we run into Canopy’s strongest attribute: appearance. The artwork from Vincent Dutrait did not disappoint.

Vincent is known for Jaipur, Robinson Crusoe, Lewis & Clark, and Treasure Island, among others. And in Canopy, he made sure the forest comes alive in front of you. I won’t waddle too long about – just look at the pictures.

The rainforest eco-friendly theme also comes through in components. This is probably the first board game that comes with no plastic. There’s no shrink wrap around the box (just 4 small pieces of sticky tape) or card decks (they come with paper bandages).

There are also paper bags to store tokens, although I found that a plastic bag, that I had lying around, works better after all. But still, 10 points for the effort.

The quality of components is fine, although the cards could use a lamination. As this is primarily a card game, the wear and tear on them are high. You could go for sleeves, but that would negate the whole eco-friendly aspect.

Canopy uses a combination of card-drafting and set-collection as its main game mechanisms. There’s also an element of push-your-luck when deciding which pile to take cards from.

On your turn, you will go through three piles of cards, deciding whether to take all of the cards from a pile or skip it and see the next. If you skip a pile, a card will be added to it, so eventually, the piles will have a different number of cards on them.

If you take a pile, you must take all of the cards in it and add them to your tableau in front of you. There are:

The starting deck is split into three smaller decks, meaning the game is played over three seasons and there’s partial scoring after each, and an end-scoring at the end. There are also bonuses for the tallest three and the largest forest.

And that’s pretty much all there is to it. It’s about choosing which pile to take, taking into account what is on offer, and what do players have in front of them.

The only “out of ordinary” in the base game are the special abilities that some animals have (peek at a pile, add 1 card to each pile, discard a card, and so on), which is a nice change of pace, although some abilities are more useful than others.

There is also an advanced deck that you can include and it comes with animals that have even more specialized abilities and plants with interesting peculiarities (i.e. Orchids are only scored if you have a Sun-Rain balance).

These cards are very situational (i.e. I never felt I need to hide cards or piles – see Pitcher Plant card below) and I did not find them too useful, since you can’t create the situations that would warrant their use. The situations in Canopy are created by the card shuffle, not player actions.

The same goes for the Shifting Seasons Variant, which is basically just a mini-rule that is active just for one season. These also suffer from being very situational and often the conditions for them are not even met the whole season.

So, for the best experience, I suggest manually selecting the advanced cards you want and creating your own deck.

Although Canopy is simple and quick to play, I found the process of selecting cards challenging enough that I had fun with it. I believe it sits nicely in the void under 7 Wonders: Duel and above Sushi Go!.

When you don’t feel like setting up 7 Wonders: Duel or you play against someone with less gaming experience, Canopy is a great choice.

Easy to play, excellent for new gamers or kids

It’s simple in the way that you can’t make a wrong move – you can legally take any pile and add it to your area. This makes it great to play against kids – our 5yo loved it.

And against an experienced player, some finer nuances show up. You’ve got to remember which cards are in the piles, so you don’t give a useful card to your opponent and there are take-that cards you have to be wary of. It’s not chess, but it’s enough to keep you occupied.

As mentioned, the theme is a huge selling point of Canopy. But more than that, it’s also educational (plants and animals come with scientific names and flavor-text facts) and environmentally inspiring.

I know that rainforest-cutting is a global issue, and if Canopy spreads this awareness among people, it’s a step in the right direction.

It’s nice I can play Canopy against my 5yo – she can play adequately. But that’s also a negative for the game – too often the optimal play is just taking the largest pile. More cards usually equal more points.

What the game needs is an alternative path to victory so that having the most points is just one of the ways. Perhaps having a specific combination of animals or building a tree of X height would be good alternative victory paths.

Another thing the game desperately craves is more structure in its deck. Shuffle can be very imbalanced – i.e I had a game when all the seed cards were in the last season.

The deck should be pre-split into three seasons by game design (having cards with different backs which would be shuffled separately), making sure there is less randomness as the plants and animals are being dripped into the game, therefore allowing for more planning and usage of special abilities.

A similar thing should be done with the Shifting season cards. What good is the Mating Season card in the first season, if I’m extremely unlikely to draw a mating pair that early in the game?

Sure, you could do all the above things manually and balance out the deck yourself – but normally the players are there to play the game, not to balance the design.

If you like animals, check out Ark Nova, a zoo-building board game.

Despite the shortcomings I’ve mentioned, Canopy is not a bad game. I had a lot of fun playing, particularly against my daughter. She loved the rainforest theme and we both loved that she could play with no problems.

And that sums up Canopy fairly accurately, I’d conclude. It’s good as an entry-level 2-player card-drafting board game.

If you want something more, you know where to look. Hint: it starts with 7.

A copy of the game was provided by Weird City Games.