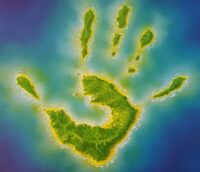 In Kahuna, two players play as shamans and fight over control of the tropical islands in a card-driven area-control game. Ready my Kahuna: Board Game Review to find out if the now-aging game still holds out and is worthy of a play.

Introduction to Kahuna: Board Game Review

We have had Kahuna for a couple of years now and it wasn’t until recently that I pulled it out of the drawer to play a few more games and to write a review of it.

The first thing you notice is the colorful tropical scenery. The game is set on an archipelago of the Pacific islands. We all have an image of paradise in our mind, and sandy beaches on a remote island are a very popular depiction of it.

That’s the trump card Kahuna is playing and its strongest selling point. The board looks very nice, but I wouldn’t mind a bit more detail on the islands, like huts, rivers, etc. It seems the islands are uninhabited since they are made only of beaches and jungles.

How is Kahuna played?

You play as two shamans, fighting over control of the islands by placing magic bridges between them. Although the theme is nice, it has no impact on the gameplay whatsoever, it’s just a mask over an abstract mechanism – a true eurogame.

The rules are fairly simple and you can pick them up in a matter of minutes.

The board is divided into twelve islands, which are connected through links. Some islands have only three links, while others have four, five, or even six. On these links, bridges can be placed. When a player has more than half of the links covered with bridges, he can claim the island with his token and all of the opponent’s bridges to this island are also removed.

Bridges are placed by playing cards of that specific island. There are 24 cards in the deck, two for each island. At the start, each player receives three cards and three are placed face-up by the deck. 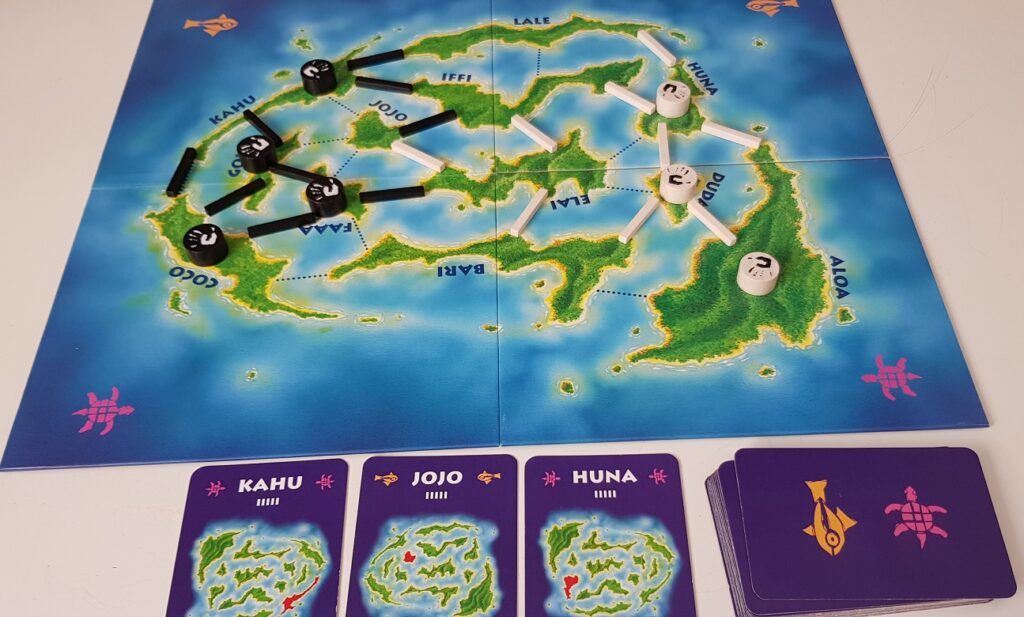 How to Play Kahuna?

In turn, a player can use any number of cards he has in his hand (or none). Then he draws one new card – either he chooses one of the face-up cards or draws a random one from the deck (or decides not to draw).

Besides placing bridges, a player can also remove the opponent’s bridges, but for this move, two cards are needed. If he wants to remove a bridge between Iffi and Jojo, he must use two Iffi cards or two Jojo cards or one Iffi and one Jojo card.

And that’s pretty much all there is to know about the rules of Kahuna. As you can imagine, these can be explained in a very short time, so the game is very accessible to new players. It’s a good filler game if you have half an hour to kill between other games. Or maybe you just don’t have time to play a longer game, because of … well, life.

Your base strategy is very limited to the cards that are available to you, but with the three cards available to choose from every turn, there are some options.

What you want to do, is choose a part of the map (card dependent, of course), to have as your core real estate. One of the two islands with three links is a good starting point. You then want to expand to neighboring islands, so that with each bridge that you place, you gain a presence on two islands, not just one. 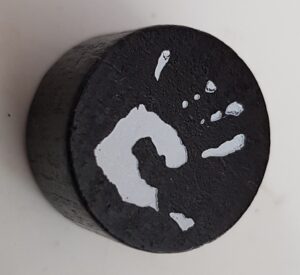 Mid and late game is about fortifying your positions and weakening your opponent’s. Build more bridges to your islands, so that you negate the risk of losing one if your opponent removes a bridge of yours. And also look for opportunities, where you can do the most damage by removing your opponent’s bridges. Remember, it takes two cards to remove a bridge, so you better make them count.

Counting cards is a very useful skill to have since there are only 24 in the deck. With a full deck, it’s almost always best to pick one of the face-up cards. As the deck gets thinner, you can be more and more certain which cards are left in it, and then you can start taking some risks.

Often it comes down to one specific card that you need (or that you can’t allow your opponent to get) to make a big move on the board. If there are only four cards left in the deck and you have counted that there are two Huna cards still in, then you could take a gamble for it (if you want the card).

I experienced that games in Kahuna are very tight and it often comes down to the very last turn to decide the outcome. Although there is some skill involved, I would prefer to have more options. Sometimes you feel like you would want to do something, but your hands are tied since you can’t get the card (or cards) you need.

Very often (especially with two players of similar skill) it comes down to luck to decide the ties and it feels frustrating to not be in full control of your actions.

So, is it for you or not? If you like light, short gameplay, it’s a good one. My partner likes it a lot (probably because it’s one of the rare ones, that she can beat me at it regularly – but don’t tell her that). Me, a bit less – I like slightly more complex games with an emphasis on strategic decisions – and Kahuna is very limited in this aspect. But we have had a lot of fun together with it – and that’s got to be worth something, too.

Read about other games, that are very suitable for couples. 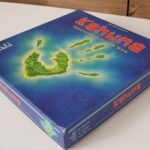 6 thoughts on “Kahuna: Board Game Review”