In this post, I’m trying something different. It’s about a highly rated game I got for myself and my humble beginnings with it. Perhaps a couple of years late to the party, I present you Mage Knight Ultimate Edition: Unboxing and First Impressions.

I’ve done a few Top List articles on this website recently, you may have stumbled across them if you visit here regularly. There are a couple of reasons for this.

First, I really enjoy researching about board games. This includes watching videos about them (how it’s played), reading reviews, looking at pictures and even reading PDF rules of them online.

Second, I believe top lists are one of the most appealing types of written material for the audience. You can get a good idea of which board games to consider, if you’re looking for a specific category and the games are described in brief, so you can get an idea on how they’re played.

I won’t lie to you claiming I play all the games on my lists – I don’t. It’s just not possible – I don’t have the time nor money to do it. But by doing a thorough research (I usually start at BGG page of a game), I can get a pretty good idea how a certain game works. 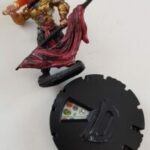 During research, some titles popped up more often than other. One of the games that I ran across many times was Mage Knight. It came up when I was doing lists for single player board games, as well as adventure board games. It really caught my eye and I began to look into it more. The thing that excited me the most, was how the hand cards are managed – how you have to combine them to do what you want in a turn. Such a puzzle, wrapped in a fantasy open world attracted me a lot.

Eventually, I started looking for prices and decided to get a copy as a Christmas gift for myself. Originally, I wanted to buy just the base game. Mage Knight is a large game and I didn’t want to overwhelm myself. My idea was to play the base game, get a good grasp on it and start adding expansions later.

Couple of days later the package arrived. I was very excited, so I opened it right away. First, I was in for a small shock. The box is damaged on a top-right vertex. It must have fallen to the floor somewhere during processing/shipping. I start inspecting other components. Beside a crack on a plastic box insert, the only damaged components was the miniature of general Volkane. Its base came off, but I figured it wasn’t glued on properly to begin with and that I can glue it back on myself (which I did).

The game components are all in mint condition, but the damaged box could be a problem if I decide to re-sell the game one day. I didn’t want to return the game and wait for a new copy, simply because I was too excited to play it immediately.

Therefore, I decided to ask my retailer for a discount. I sent them an email with photos and they offered me a 15% discount in a form of a coupon for my next purchase. I considered the offer reasonable and took it. And already spent it on another game. 🙂

I was later told in a FB group I could have gone for more, but OK, lesson learned for next time. (Hopefully no more damaged games for me.)

Components of Mage Knight are made of two things: either cardboard or plastic. I was a bit disappointed by plastic components (miniatures, dice, crystals and cities) – they used cheap plastic. It’s painted beautifully and they will do just fine, but I had higher expectations, especially considering the premium price.

Cardboard components (tiles and cards) are of very high quality and the art is very nice. But, there are so many of them! It was at least half an hour before I managed to punch them out of their templates!

And that does not take into account sorting them. The components of the base game, The Lost Legion, Krang, and Shades of Tezla expansions are all sharing the same templates and the cards are in the same bags, nothing specifically marked, so that you could only open the base game stuff if you just wanted to play the base game.

Once you open them, the cards of different expansions are marked with icons and there are lists of components in the rulebook, so that you can sort them. That’s what I did next, since playing the base game was my initial goal.

The box comes with inserts for all the components. Although there are no markings, it’s self-explanatory and quite intuitive where to put something in. I did have problems with some of the smaller cardboard cards, like skill cards. Putting them in was a pain, since they wouldn’t stay put and kept tipping over.

Another problem I ran into later, was that all the small cards of the same type are in the same insert, not separated by type or character that uses them. All skills for all the characters in one, all enemy tokens in another etc. Finding the right ones as you set-up the game is a bit frustrating and in the future I will have to come up with my own solution to make this easier.

A quick fix would be to put components for each of the seven characters in a separate bag and to also put enemies of the expansions in a separate bag. That would reduce number of components significantly and handling them would be much easier – I could only take what I needed and leave everything else packed.

Mage Knight Ultimate Edition comes with three books, each around 20 pages long. You get the Rulebook, which is just that – all the rules and technicalities in one place. Then you have a rulebook for expansion, which explains what they bring to the game, how to play them and so on.

For start, you need the third book – The Walkthrough. It’s specifically designed to guide you through the tutorial scenario, explaining things as you play along. It starts with explaining setup, movement, combat, discovering and using map features etc.

What Is The Best Way To Learn Mage Knight?

Although I had a pretty good idea how the game is played (I had done all the research for my articles), setting up a game for the first time took me a lot of time. And then I ran into my first enemy, a marauding orc. He had physical resistance, so back to the rulebook to find out how that works. Just understanding if I had enough ranged attack to take him out (I didn’t) took me ages. Well over an hour spent and I had done almost nothing yet.

I was starting to run out of time (real life called), so I decided to pack it up, get back to the rulebooks and try again the next day.

Re-reading the walkthrough and looking into rulebook helped me clarify some things and I was ready for my next go (just a reminder, we’re still at tutorial). This time setting up went much smoother. I even managed to understand how the dummy player should work (or so I thought – later I found out I was drawing too many cards when a crystal color card came up and I was calling end of the round one turn too soon).

I was done with the scenario in just over an hour. It’s an easy scenario, but it was nice to get something done. I was still making big rule blunders, like taking fame when killing a summoned enemy or leveling up incorrectly (taking a skill card when I shouldn’t have), but I figured I’m improving.

I was ready for my first real mission. Or so I thought.

I set-up a game of solo conquest. I took Arethea out, because she looks cool (I don’t have nearly enough experience to be able do differ the characters) and … it was a disaster. I was supposed to conquer two cities and failed to even find them both, let alone capture them.

But I was not disappointed – I learned a few new things along the way:

So far, I’ve had a very positive experience with Mage Knight. It fulfilled my expectations. Very complex game mechanics with a lot of options may overwhelm you at the beginning, but don’t give up. Game will start giving and it will give you a lot. I’m looking forward getting into that stage and can’t wait to play my next game.

But before that, there is some homework to be done. First, re-read the rules. There are some situations I want to clarify: like city combat, how to set-up tiles (I think I ran into my first city a bit too soon), when do advanced units come into play, how exactly to refresh units, actions and spell offers (do I remove all of them or just replenish missing?).

That will help me speed up the game in advance and re-reading some of the rules I already (I think) understand, will avoid learning the rules wrongly. You know, when you played for years, only to find out you’ve been doing something wrong the whole time. That’s what I want to avoid.

Another thing I want to do parallel to playing, is sorting out the components by characters and expansion, so I can find them with more ease as when I set-up a game.