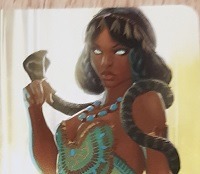 Earlier this year, we acquired a copy of 7 Wonders: Duel and it has quickly become one of our go-to games. I’ve always been a fan of ancient civilization-themed games. Combine this with just the right complexity and short playtime, and the high popularity of the game in our household is no surprise.

Therefore the Pantheon expansion fits excellently as a Christmas present for both of us. I know we’re a bit late to the party and that the second (Agora) expansion has already been published, but better late than never, as they say.

So, does the expansion improve the already great game? Does it add interesting new mechanics or just dull ballast? And most importantly, should you buy 7 Wonders Duel Pantheon Expansion?

The most prominent new component is the Divinity cards. There are 15 of them and they come in 5 flavors. Each one of them represents an ancient God, who provides a one-time special ability. Let’s see what they are and what they do in more detail.

The Divinity cards are somewhat larger in size and they come with beautiful portraits of the Gods. They fit into the Pantheon board, which wraps tightly around the original military track. It all fits well together and makes it appear it was meant to be there from the beginning.

The Gate card is the last card to be placed in the Pantheon. It’s a wild card, giving access to unselected Divinities (more on that later).

Ten Mythology tokens (2 per each Mythology flavor) are added, as well as Offering tokens, Snake token (for Nisaba), and Minerva Pawn. New Grand Temple cards replace the Guild cards, and finally, there are two more Wonders and three Progress tokens.

The Divine Theater allows you to choose from one of the previously unselected Divinities (you select which Mythology) and activate it immediately. This Wonder is worth 2 victory points.

The Sanctuary grants a permanent discount to activation costs of the available Divinities. You also play a second turn with this Wonder. 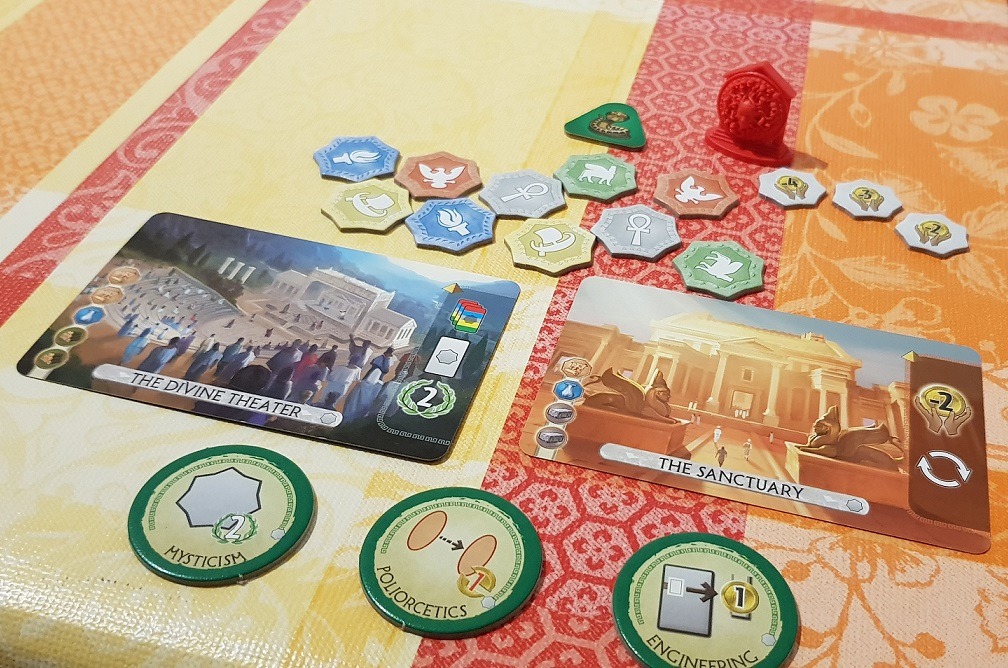 The rules of the game do not change drastically from the base game. The expansion builds on the solid base game foundations and it’ll only take you a game to get a hang of it.

The Divinities are split into 5 decks of 3 cards, each Mythology flavor in its own deck. During Age I, 5 Mythology tokens will be placed in the structure. Whenever you take a token (you do when the card it lays on is “open”), you choose one of the top two cards from the deck depicted on the token.

You then place the chosen God into a slot on the Pantheon board. Slots differ by cost – some are cheap for you and expensive for your opponent and vice-versa. The Gods are placed face-down, so there is a nice tactical touch added. You can place favorable Gods at your side or you can instead choose a God with a less-useful ability and place it in your opponent’s cheap slot.

After Age I, when all five Divinities have been placed, you flip them face-up and add the Gate to the sixth slot. The Gate works in a similar fashion as the Divine Theater, the only difference being that you now take the top card from each of the unselected five Divinity decks. It’s worth mentioning that the Gate costs double to activate, compared to other Divinites available for activation.

In Age II, three Offering tokens are added to the structure. When you acquire them, they work as a one-time discount for activating Divinities. 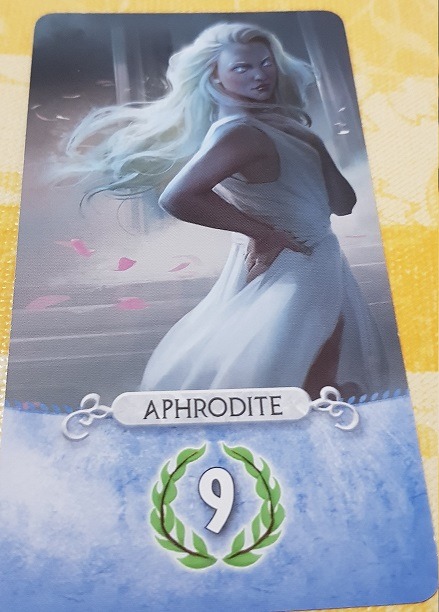 You can activate a Divinity as one of your standard actions (instead of taking a card from the structure). All Divinities in the Pantheon board are available (including the Gate), as long as you have the money for it. You take the Divinity card into your city and its effects are activated immediately (just like a Wonder).

The Grand Temples come into play in Age III in place of the Guilds. They are high-scoring buildings, especially if you build more than one. If you have a corresponding Mythology token, you can build a Temple for free, otherwise, they’re quite expensive. I often found it’s better to discard one than to let your opponent build it.

The Grand Temples are a bit of a mixed bag. Although I wasn’t a big fan of the Guilds, they at least were a strategic option where you could get points for something you had already been working for the whole game (i.e. capitalize on all those red cards you already had).

With Temples, it’s a point grab. There are three available in each game and it’s just a race to who can get the most. The only piece of strategy is happening on the structure – denying each other the card. 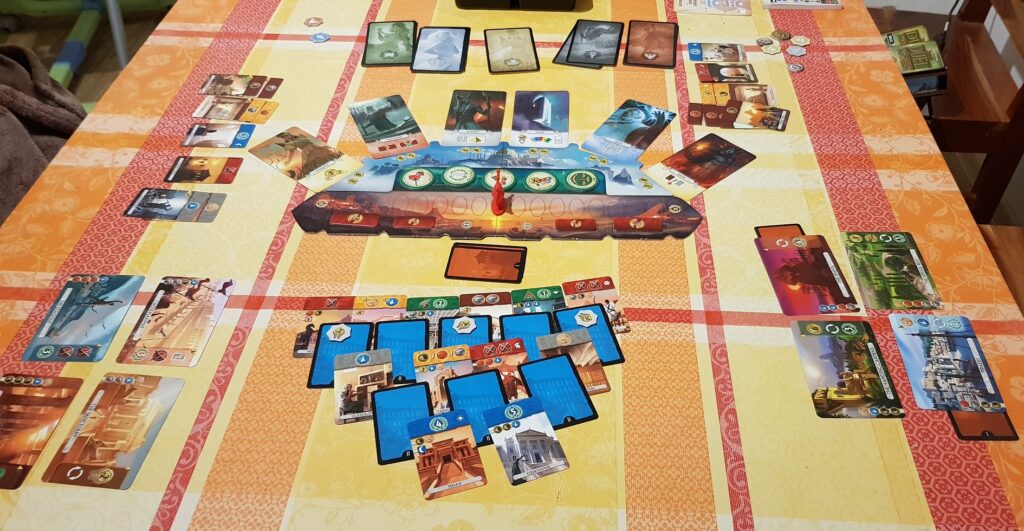 Who should buy Pantheon?

The Pantheon expansion offers a lot more PvP interaction and take-that actions. The Divinities themselves have many ways to mess with your opponent (stealing resource cards, stealing money, or even stealing Wonders), but the meta itself shifts more towards playing your opponent than building your city.

I found I was selecting the cards from the structure much more carefully. This is now possible, as you don’t have to take a card – you can activate a Divinity instead. So that is a nice new option to have when trying to deny your opponent cards.

But that nice new option costs money, so you’ll discard more cards than before. If the base game was all about producing, commercial buildings now become more valuable.

Of course, not everyone will like the more direct approach. If you’re the type that enjoys focusing on your own city more, this might not be for you.

But that’s not really how the game should be played. It’s called Duel for a reason – you play against the other player. I feel that the Pantheon builds on that concept perfectly. It fits thematically and gives players new, interesting, and important decisions.

But it’s most of all a very fun addition to the already excellent game. I can’t see myself playing it without the Pantheon expansion, and frankly, I can’t wait to try out the Agora expansion!

I rate the Pantheon expansion a mandatory addition to the excellent 7 Wonders: Duel.