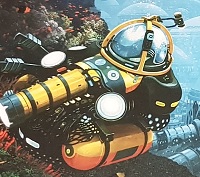 I finally have the chance to review highly Underwater Cities, a worker placement board game by Delicious Games. Does it live up to the expectation?

Oceans are one of the last unexplored places on our planet, therefore it’s no surprise that the depths have always been a source of myth and mystery. Atlantis, mermaids, Kraken. They all imply that there’s something more hidden under the waves. An underwater civilization?

Underwater Cities takes this idea and adds a sci-fi twist to it. In the near future, the Earth is overcrowded and we have decided to start building cities on the seafloor. Several such settlements have sprung around the globe and you’re the leader of one of them.

The theme in Underwater Cities is an interesting one, and certainly, one that’s not frequently present in board gaming. The artwork accompanying it is spot on, with dark blue colors prevailing.

I do have a couple of issues with the theme, though. The first is that the world isn’t completely thought through in detail. For instance, they say only that we started building underwater cities because the world is overcrowded. I’m sorry, but there are million better spots to build a giant expensive dome. Deserts, floating cities?

A better background story involving stuff like nuclear fallout, shelter, and search for valuable resources would make the whole theme much more believable.

This leads to my second issue, which is that the theme fails to come alive. The city layout is too plain and geometrical, the whole theme has a boring political and corporate subnote (Organize a conference or a Government grant just don’t sound too exciting), and the city domes with their corresponding structures are lifeless. Your completed board of underwater cities doesn’t fill you with pride, joy, or a sense of accomplishment.

So, overall an interesting theme, but unfortunately not developed enough. But, since this is the publisher’s first game, I can understand the shortcomings. To be frank, they did a fantastic job in this aspect with their next title, Praga Caput Regni.

When it comes to art and components, the story is similar to the theme. They make the job done, but they’re nothing to write home about. Player boards are flimsy and you need to be careful not to knock buildings around. (I should note that this is rectified in the expansion.)

While the structures and domes are plastic, most of the other tokens are cardboard. That’s fine, but action markers would work better as worker meeples (that’s what they are). They would be more visible and easier to handle since you tend to move those around quite a bit.

The card art is decent, but it tends to repeat itself. There are a lot of cards, though, so that is understandable. But again, there’s nothing that would stand out and make you go, wow, that’s stunning. It’s just … nice.

Setup is refreshingly quick. Yes, there are several resource tokens that you need to prepare, but you just pour these out of their bags. You prepare the decks and that’s pretty much it. I really loved the short setup time, especially for solo play.

The rulebook is well laid-out and explains all the mechanisms well. It’s very colorful, with plenty of illustrated examples. I did have some trouble referencing a few rules mid-game. Because of all the examples and iterations, I wasn’t really sure in which chapter to look. But that was a minor issue.

Resolved cards are discarded unless they provide a lasting effect: extra actions, production, and end-game bonuses. This also introduces a tableau-building element to the game.

There are three card colors (suits) and it’s in your best interest to always play the matching color. But you can only hold three cards in your hand, so this is regularly easier said than done.

Frequently you’ll have more cards at the end of your turn and be forced to discard down to 3. Will you try to keep all three colors, making you more flexible? Or maybe you want to do everything to put that important scoring card into play. Luckily, you have until your next turn to decide, which gives you something to do when it’s not your turn.

These actions are the bread and butter of Underwater Cities. If you plan them correctly, you can chain several together: Action slot, the card you play, perhaps you even activate another action card, plus you might have an ongoing effect available.

I found the tactical and strategic options Underwater Cities gives you very engaging, interesting, and rewarding. Power/combo moves are very satisfying and fun to execute.

Of course, a card-driven game means there will be an element of luck in the draw. It’s inevitable, but it’s low enough not to seriously hamper you. It can happen that there’s not anything useful you can do on your turn, but it’s very rare. You can still discard for money and draw two replacements if you happen to see that you’re hands are tied.

I think the biggest issue with the game is the low player interaction. As in any worker-placement game, there is competition for action slots, that’s expected. That’s why it’s important to be high up on the federation track as it decides the order of play.

But out of that, there’s not much extra. There are special scoring cards that are limited, but I found that there are enough of them to go around. Then there’s a variant with government contracts, which are mid-game goals players will race for, but the rewards are not significant enough, to hurt you too much if you don’t accomplish them.

Even action slots are not that restrictive. Alright, it sucks, when someone takes the exact slot you planned to use, but fine, I’ll just do something else this round, which will also help my board grow. You’re just too focused on your own underwater nation (your player board), to be bothered with others.

New Discoveries, the expansion, has several modules that increase competition among players.

And you’ve got a lot of options on how to develop your board. You’re free to decide which way(s) to expand (there are bonuses you can get in certain spots), which cities to build (red ones are more expensive, but they produce points), and which structures to build.

There are three types of structures you can build around the cities. If you have a pair of upgraded structures of the same type, you get bonus resources. On the other hand, if you have more types of structures around a single city, that city will score more points at the end. It’s a trade-off and it’s a part of your strategy. Both ways are viable. As is the middle path.

So, if you can’t build a new city this turn, that’s not a big issue. Just build something else now (depending on your cards, resources, and which action slot is available), maybe try to get higher in round order, and wait for the next round.

Or build a tunnel, upgrade your structures, claim more resources, activate an action card, draw a special card. There’s always an alternative to how your underwater nation can advance, even if your preferred action slot is taken.

This freedom also means that beginners will often have trouble deciding what to do, especially if they play against more experienced players. So give players some guidance, because they will struggle against seasoned players.

A long game time for larger groups, but an outstanding solo mode

Another issue with other players is that the games can get quite long, especially the 3 and 4 player games. Even though the turns go by relatively swiftly, there’s a lot to think about and the minutes quickly add up and turn into hours. If your group has analysis-paralysis-prone players, I wouldn’t recommend it for larger player counts.

But if the low interaction and playing time are issues in multiplayer, they make the game perfect for solo mode. This way, there’s no downtime and you’re left only with the crunchy decisions. You’re free to take your time, as no one is waiting for you.

The board requires very little maintenance between turns and the goals are clearly defined – you aim to achieve 100 points or more and 7 connected cities, which is a target that is spot on in terms of difficulty balance.

I’ve had a lot of fun with Underwater Cities as a solo game and if you find the theme and game concept interesting, I can recommend it.

Most of the board “maintenance” is done during the 3 production phases. All your cities and structures now produce something, depending on how many of each structure you have around a specific city and if the structures are upgraded. This part can be a bit complicated for new players, luckily there’s a player aid included, which helps greatly. Still, there’s a bit of math to do in these phases. At least you’re rewarded with resources for your calculating. 🙂

Underwater Cities comes with a lot of variability right out of the base box. Player boards are dual-sided, with the backside offering some extra tactical opportunities on certain slots. And, of course, most of the game is card-driven, which is a random factor itself. Luckily, every card without a straightforward “gain” action has an explanation written on it. As you obtain more experience, you’ll resort to the iconography on them, which is also entirely clear.

Conclusion – Is it for you?

To conclude, Underwater Cities is a game with more than solid foundations. The worker placement mechanic combined with card play is excellent and offers players plenty of brain puzzles. The theme is interesting, although not perfectly executed, and the components are satisfactory. The main issues are the low player interaction and long playing time, so I would suggest it for lower player counts, even solo.

Unfortunately, I can’t place Underwater Cities among the greats. It just didn’t click with me as some of the games I had the chance to try lately (i.e. Brass: Birmingham). I feel like it’s just a sum of its parts, nothing more. It is still a pretty hefty sum, but it lacks that elusive X factor, which would elevate it among the greats.

But that may also be subjective. If what you see and read has you excited, you might be that missing factor.

>>>Shop for Underwater Cities on Amazon<<<