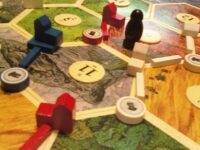 Cities and Knights is an expansion of Settlers of Catan, released in 1998. It shifts the gameplay of Catan into more of a city-development game with elements of fighting barbarians and a deeper element of interaction with other players. New game mechanics are introduced giving players more options when playing. Let’s see what is Cities and Knights all about.

Having a city is pivotal in the expansion, therefore players start with one city and one village. Cities produce commodities (on top of resources). There are 3 commodities: cloth (from pasture), coin (from mountains), and paper (from the forest). Commodities can be traded just like resources.

Using commodities, cities can be improved in 3 areas, with each having 5 levels. Every higher-level provides additional benefits like a higher chance to receive progress cards and special abilities. When a city reaches level 4 in any area, it becomes a metropolis, granting 2 more victory points.

Another new improvement is the city walls. Each city can have one, and each wall increases the maximum amount of resource cards in hand by 2, to a maximum of 13.

Knights are now no longer just cards – they are tokens you buy (for 1 ore and 1 sheep) and place on an intersection on the board. They can be promoted up to two times, to make them even more powerful.

When a knight is activated (costs 1 grain), it can perform actions such as moving, chasing away the robber, or fighting other knights.

A third die, event die is introduced. It serves to determine whether barbarians make any progress toward the island.

Barbarians are an important new game mechanic: each time their ship lands on the island, a fight between barbarians and knights is initiated. If knights win, the player who contributed the most receives a defender card, which is worth one victory point.

Should barbarians win, the player with the fewer knights loses a city – it’s demoted to a village. After each barbarian attack, all knights are deactivated. To restore their functionality, one grain per each is needed (or a special progress card).

The second purpose of the third die is to determine the distribution of progress cards. They work similarly to development cards but are significantly more powerful, specialized, and oriented toward harming other players.

How does it feel to play?

I admit – the first couple of times I played Cities and Knights, I was confused and overwhelmed by all the things to do.

The Player has a lot of options during his turn. Building roads (and ships, if you combine Cities and Knights with Seafarers), settlements, and upgrading to cities are still here, but now you have to build knights to protect your property, upgrade your cities and be wary of barbarians’ progress.

All that with a combination of looking out for other players who try to do the same, obstructing them, using political cards on them, and still trying to keep them friendly enough to trade with you.

On average, you will have more resource cards in your hand than in the base game, but of course not enough to advance in all aspects. Wise decisions like using that clay to build walls instead of roads (or vice-versa?), deciding to use the grain to activate your knights instead of upgrading to a city (or hoping the barbarians don’t make it to the island yet and risking it) or trading them away for commodities are decisions that win or lose a game. 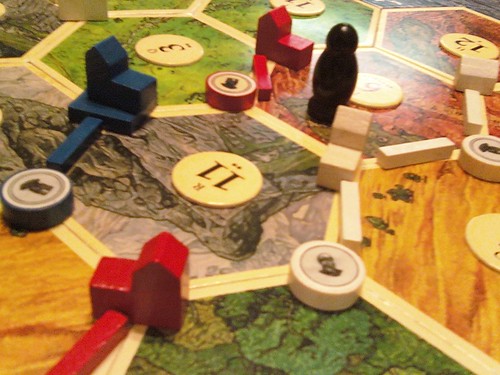 Players’ turns last longer and it can take a while for the turn to come to you, especially with 5-6 players extension. That can be a bit frustrating, but not nearly as much as when barbarians raid your city, another player sabotages your city, or uses a progress card to destroy your road. You have to be careful who you play Cities and Knights with, as back-stabbing moves like this can quickly turn an enjoyable evening into a nightmare.

The endgame is pretty chaotic – with all the progress cards in the game by now, cards and knights are moving all over the place – and luck plays a significant part in this too (remember, that there are now three dice). All that combined means that a game of Cities and Knights lasts longer (around the 2-hour mark).

If Seafarers feels like a natural expansion for the base game, Cities and Knights doesn’t have that Catan feeling and feels much more like a different game. It’s up to you to decide if that suits you.

Did you know Catan is still on the list of most popular board games?

Who it’s for and who it’s not for?

Cities and Knights take quite a lot more skill to be played. If you are a fan of Catan and you have a couple of like-minded friends (who are not afraid to put time and effort into the game), then go ahead. You will have a lot of fun building your cities and playing political games with each other.

On the other hand, if you are more of a casual player or not a die-hard Catan fan (and you play with players who are also casual or novices), then Cities and Knights are going to be too much for you. It takes a bit of learning and adapting. I believe you get much more value out of your time if you go for the base game with Seafarers expansion or another board game altogether.

As with other expansions, a 5-6 player extension is also available, and it works the same way. You need the base game, base game extension, and Cities and Knights expansion for this extension to work.

For a 3-4 players game, you only need the base game and Cities and Knights expansion.

Cities and Knights are also compatible with Seafarers – some special rules apply in this case.

I tried to keep this review as brief as possible and focus on the important bits. I am aware I have left out some finer game mechanics and elements (such as the trader or the development flip-charts), but the point wasn’t to recite the rules but to give you my opinion on how the game feels. Hopefully, I succeeded.