There are several modes of playing Clans of Caledonia as single-player. We take a look at four of them and discuss which ones work and which don’t.

In our hobby, the influx of new games is way too large to be able to play all the games we would like enough, even if you have your buying habits under control. Often, even games we love start to gather dust on the shelves after the honeymoon period is over. That’s why every once in a while I take a game off the shelf I haven’t played in a while.

I try to rekindle the flame and remember why I decided to keep the game (and also sometimes why I haven’t picked it up since). Last week it was Clans of Caledonia’s turn for a second chance. I  wanted to try two new solo modes I found online.

In my initial review, I appreciated the game for its strategic depth, elegant gameplay, and lovely appearance. A gameplay system very similar to Terra Mystica or Gaia Project, Clans of Caledonia focuses more on resource management than area control. It’s excellent in multiplayer, but I also want the games to work in solo mode since this allows me to try out game mechanics and strategies much faster. 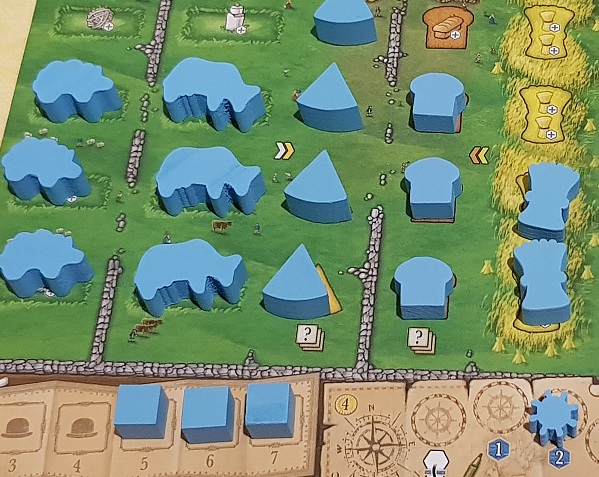 Clans of Caledonia features a solo mode right out of the box, and it has several aces up its sleeve. You are playing to beat a high score and there are no opponents on the map. The building area is restricted by making all the 1-cost hexes unavailable.

This results in very fast and engaging gameplay. The strategic depth it packs in merely 30 minutes of gameplay is unparalleled. Usually, only light solo games (i.e. Friday) can be squeezed into such a tight time frame, therefore Clans of Caledonia is a welcomed exception. (Although to fully benefit from this, you need a storage solution to shorten the setup time).

While the blocking of 1-cost hexes feels slightly unnatural, it’s a compromise I can live with. But the flawed victory conditions of the beat-a-high-score system are something I couldn’t, and that’s why the game was left on the shelf unplayed. Let me explain.

In each of the five rounds, there’s a round of scoring. These scoring tiles vary and are chosen randomly. For example, you will receive points for the number of workers you have deployed or the number of processed goods you have in possession at the end of a round, and similar. Again, a system very alike to Terra Mystica.

This scoring system keeps the gameplay fresh as you have to balance your play between the theoretical optimal play and maximizing the points from round goals. As these are random, there will be games where players naturally score more points from them and games where they score fewer points. This is completely fine in multiplayer – the criteria are the same for everyone and to win, you compare your score against other players.

This makes your score incomparable – both against the target score and your other playthroughs. Yes, you can derive your pleasure from playing well, but I’m the type of person that also needs a numerical confirmation of my efforts, and Clans of Caledonia failed here. And this killed the original solo mode for me.

I was quite excited when, browsing BoardGameGeek, I stumbled upon a fan-made automa (by user svardosi) mode for playing Clans of Caledonia solo. It includes only 8 cards, therefore the printing and crafting part was done quickly and the rules are quite concise, as well.

The automa mode almost completely nullifies my issue from the base game. You compare your score to an AI opponent, so if the round goals are unfavorable, it too won’t score that many points.

The AI uses a player mat just like you and its actions (building placement, market actions, contract fulfillment) are dictated by a deck of cards. It uses a simplified set of rules, so that your focus remains mainly on your actions, not on managing the bot.

How does it work in practice?

The end result is a very good simulation of a human player. Although it is not perfect (sometimes it will do a random action that makes no sense, strategy-wise), it is a really good estimate, particularly considering how few components it uses to achieve this.

It expands somewhat naturally (just like a person would), which greatly improves the area control aspect. You can also use 1-cost hexes and utilize the neighboring bonus, just like in multiplayer.

The only negatives are that it does require a bit of upkeep (this is especially noticeable since there’s literally zero upkeep in the original solo mode). This roughly doubles the playing time, particularly for the first game. It gets easier after you have some practice with the automa and you can expect the game to last around 45 minutes.

But this is a negligible negative compared to all the positives it adds to the solo mode. I highly recommend it and it’s completely free.

(3) Solo Challenges against other players

There’s also a very interesting alternative to the automa system which also negates the scoring issues – all players play with the same setup and you compare results with each other after the game. This allows you to see exactly how you fare against others.

I found one such challenge on BGG forums. The whole setup is pre-determined, the only variable that you get from game to game are the contracts that come up during it. Despite this, this is a fantastic way to play Clans of Caledonia solo. The scenario I tried was well-thought-out, with opportunities and traps built-in.

But, unfortunately, this challenge was from March 202o and also the only one I could find. Clans of Caledonia just doesn’t get the popularity it would deserve based on how good of a game it is. As such, the community is not as strong, as i.e. with Gaia Project, where they’re running a similar monthly challenge regularly for several years. But maybe it’s just time for someone to just take the plunge and create another challenge.

I have to admit that this mode was hard to find online. This was supposed to be an official automa mode with a 22-card deck, but the publisher is no longer advertising it through its website.

It was only through another thread that I found the links to this mode. Using one word, I’d describe it as complicated. It comes with 14 pages-long rulebook which determines the AI actions in much detail. It simulates human behavior very well, but it uses many flowcharts, priority lists, and the input of the player to achieve this.

Luckily, there’s an online version available that helps with the process, but the burden on the player remains high. It’s no surprise that I wasn’t having much fun with it, as figuring out what the automa will do demanded more time than actually thinking about my own moves. (Tabannusi has the same problem.)

I’m guessing the publisher came to the same conclusion and that’s probably also the reason they’re not promoting the mode on the official website.

As you can see, there are several ways of playing Clans of Caledonia solo. The base game system has scoring issues, the automa works great, but it does increase the playing time. Then there are challenges, seemingly the best of both worlds – but the Clans of Caledonia community doesn’t seem strong enough to have them going regularly.

There may be another option on the horizon, as the author has hinted that there’s an expansion coming someday. It will feature an official solo mode (hopefully much revised), among other things. But since Mr. Al-JouJou is working on different projects at the moment, there may be years until the expansion sees the light of day.

Until then, the modes in this article will have to do for solo play. Also, there’s always multiplayer, which is even better.