Rum, cigars, exotic dancers! Santiago de Cuba is an economic and trading board game set in the second-largest Cuban city just before the Revolucion. Read the full review below.

I mentioned in my review of Forbidden Island, that I have bought some used games locally. The previous owner must have loved the Cuban theme because three of those games share a similar, Cuban theme. One of them is Santiago de Cuba, and here is my review of it.

The game has a decent BoardGameGeek rating of 6.9, but the most important factor in favor of Santiago de Cuba was that, although it can accommodate up to four players, it is best played with two.

That means I can set up a game very easily with partner, without the hassle of organizing a game night and calling up other players. We were able to test the game extensively on our own.

The game is set in Cuba’s second-largest city in the recent past. The date is not specifically set, but it’s somewhere before the revolution. Thematically, it’s very similar to the computer game series Tropico. The looks are highly thematic and they set you right there in the Caribbeans.

But don’t be fooled by the nice visuals – Santiago de Cuba is a tight eurogame.

The object of the game is, like with any self-respecting eurogame, to collect as many victory points as possible. You earn the majority by delivering goods to the ship in port.

The ship is one of two peculiar game mechanics, unique to this game. It’s represented by four dice and the numbers on those dice represent the demand for resources.

There are five resource dice, but for each ship, four are chosen by a player (by one that made the last ship sail). With each resource sold, the number on the die goes down by one. When all dice reach zero, the ship leaves, and another one comes into port. When the seventh ship sails, the game ends, and end scores are calculated.

Five basic resources are sugar (white), citrus (orange), tobacco (green), rum (red), and cigars (black). Wood is the sixth, special resource, which can be sold to ship in place of any other resource for the price of one victory point (while basic resources can give 2, 3, or even 4 victory points for every resource).

Round and round the car goes

The second interesting game mechanic is how the players move on the board and choose where to go (the action slots they place their workers in). You can’t just go anywhere you please, but usually, you have a couple of options (depending on how much money you have at the moment).

The playing board consists of 9 places (8 Cubans and the port). All players travel around the board in circles using the same piece – the car. When it’s your turn, you can move the car one space forward for free. If you have money, you can pay one peso for each space above that to move the car further.

Eight Cuban spaces are your main source of resources and money. Each time you visit a Cuban, you immediately use his/her function:

Using the Cuban’s function is only the first action slot you use on your turn. Each Cuban has a rose of a certain color on its tile and that is the second action slot of the turn. There are 12 different buildings of 4 different rose colors on the game board and the color of Cuban’s rose determines which building’s function you can use.

Functions vary a lot. From simple gains (gain 2 pesos, gain 1 victory point) to trade buildings (trade sugar for rum, trade tobacco for cigars, trade any for any, trade-in wood for money and victory points) and to special buildings (move value marker in port, immediately turn one die to 0, close one Cuban tile), there is something for everyone.

A random setup for every game

For every game, Cuban tiles and building tiles are all shuffled and randomly distributed, ensuring that every game offers unique challenges. And it’s this combination of tiles that also offers unique tactical options for every game.

You’ll be able to make choices such as:

Considering what are the most effective ways to visit a Cuban and use a building are some aspects you’ll be thinking about. Random factors (Cuban tiles, building tiles, and port dice) ensure that there are no end-all tactics and that every game is fresh and requires you to forge new strategies.

Whenever the car stops at the port, delivery to the ship is triggered and players have the option to sell their goods for the price set by value marker (2, 3, or 4 victory points for every resource). The player who moved the car starts the delivery round. Only one sort of good can be sold at the time and delivery continues until all demand is met or players don’t want (or have any) to sell anymore.

Deciding which resource you are going to sell, is not always straightforward, but it’s another mini-tactical fight. Sometimes it’s better to sell a resource that is in less demand, just to deny other players the sell (you would ideally be setting up this situation well before you arrive in port). It depends on the situation, of course, but such depth is well appreciated. 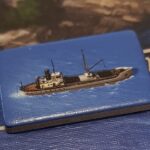 After the delivery, there are two possibilities – either the ship is full or not. If it’s full, the player who moved the car to the port throws dice for a new ship. If the ship is not full, the value maker for future goods sold increases by one. In both situations, the delivery is over, and the turn goes to the next player to move the car.

The ship is usually full, only rarely does it happen that it’s not completely filled. So, for seven ships to sail, you can expect the car to come around the board eight or nine times per game (that’s for a two-player game).

When the seventh ship leaves the port, the game ends, and points are calculated. The player with the most victory points (what a surprise!) wins.

With more than two players, the game does not work as well. The car goes around faster, giving you fewer tactical options and making the game more opportunistic than strategical. I dare even say chaotic.

Some reviewers also came across the problem of hoarding resources. Since resources are a limited commodity, if one or two players start hoarding a certain resource, it can seriously harm the balance of the game and obstruct the flow. This is more likely to happen if you play with a full 4 player count.

Taking everything into account, games come down to very close and tense battles, where every victory point counts and the outcome is tight to the very end.

I have to admit I like this game. The gameplay is smooth, with a lot of space for tactical moves with very little luck involved. I find it perfect for a quick 2 player game.

Component quality is very high, with resources, dice, and tokens made out of wood and tiles, coins, and victory points made of thick cardboard. Bought used, I did not notice any wear on them.

Unfortunately, since this is an older title, the game is out of print. But if you can get a second-hand copy somewhere for a reasonable price (for 20 or less), definitely consider it. But for the price the used ones are currently on sale on Amazon, it’s a bit too much.

Another option to play the Santiago de Cuba is going fully digital. The game is available at Yucata, where you can play it for free. It works perfectly, I may add.

Check out Raiders of the North Sea, a worker-placement game in a Viking-themed environment.