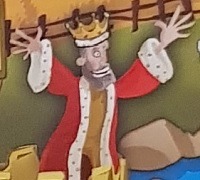 Kingdomino came out in 2016 and received the “Spiel des Jahres” award in 2017, the most reputable award in the industry. The same year, its successor, Queendomino was released. But how do they compare, Kingdomino vs Queendomino? This article reveals what similarities they share, how they differ, and which one is best suitable for you. 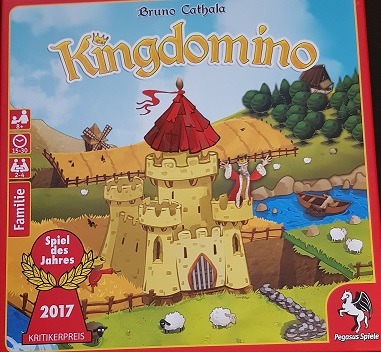 How is Kingdomino played?

The brilliance of Kingdomino lies in its simplicity. On BGG’s weight scale of 1-5, its score is 1.21. I’ll briefly go through the gameplay, as it’s crucial to understanding the rest of the article.

In Kingdomino, your goal is to build a kingdom out of 2×1 dominoes. You start with your castle tile (1×1) and you place dominoes around it until you complete a 5×5 grid (or 7×7 for a two-player variant).

There are several terrain types: fields, plains, forests, lakes, swamps, and mines. When placing a domino, at least one of the terrain tiles must align with an existing terrain (or the castle tile, which acts as a wild). Some tiles come with crowns on them, which act as multipliers at scoring.

When scoring, the number of connected terrain tiles is multiplied by the number of crowns on them; and calculated separately for each detached terrain (type). You’ll try to build as large and as monotone as possible with all the crowns you can muster, to get those multipliers high.

This isn’t always possible and you’ll have to make compromises as you go. Here’s where a clever system of claiming dominoes comes in.

On every round, a new row of 3 or 4 dominoes (depending on player count) will be laid down, sorted by the number on their backs (which marks their approximate value, depending on terrain type and crowns). Players will mark the dominoes as theirs by placing a king token on them. 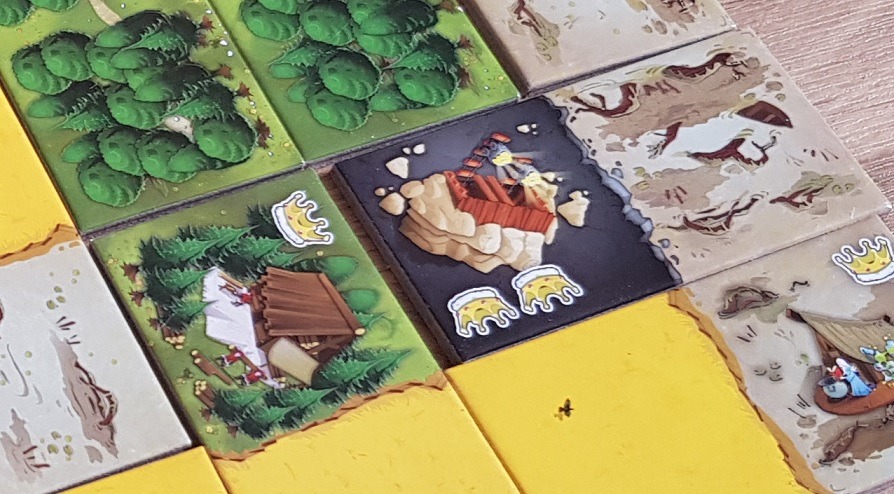 The trick is that the player who acts first on a round (has a king placed on the top domino) now has the first pick on the dominoes in the second row (which is already laid out). So, if you picked the “worst” domino in this round, you’ll have a chance to pick the “best” in the next one and vice-versa.

I added quotation marks, since what is worst or best for you might not be for your opponent. Careful planning is needed and sometimes you need to bite the bullet in order to get the fruit in the next round. The system is very well-balanced and it combines just enough luck with clever strategical thinking, always having that final scoring in mind.

I’ve included Kingdomino on my list of best board games for couples.

Queendomino is a strawberry topping over Kingdomino’s vanilla

Queendomino is built on Kingdomino’s foundations. All the above mechanics stay the same and work out exactly like in Kingdomino. It adds new features on top of that: 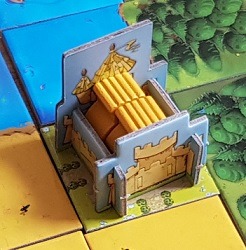 If we summarize a player’s round into 5 phases:

One thing both games have in common is the high quality of components. Dominoes are glossy and made of thick cardboard. Figures are all made of wood, carved in detail, and colorfully painted.

The artwork is just phenomenal and it is consistent – from the box right down to the tiniest detail on the tiles. And no two dominoes are the same: each terrain has several mini touches, like a scarecrow on a field, people mending the roof, monsters under the sea, wizards doing their stuff, dragons in swamps, giant spider in a forest, and so on.

Such details have no influence on the gameplay and you won’t notice them unless you look deeper, but it’s really nice to see the artist put in the extra effort.

It’s hard to make a direct comparison, since the games do not compete against each other, but rather complement one another. Queendomino is a direct upgrade, surpassing Kingdomino in every aspect.

But that doesn’t mean Kingdomino is not worth owning:

Which one to buy?

Another thing both Kingdomino and Queendomino have in common is their low price. The first one is under 20, while the latter is slightly over that. (Check the link below for up-to-date prices.) If you want to play the Royal Wedding variant, you don’t have to spend a fortune.

For a filler game, something to play in-between bigger games, I’d suggest Kingdomino for its simplicity and quick games. But if you want a new light/medium main game for your board game night, Queendomino is a better choice. If you play with 7×7 grids, a game will normally take about 45 minutes.

(I am affiliated with Amazon – if you click on an affiliate link and decide to buy something, I will earn a commission.)