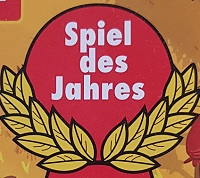 This article answers the question of What Are The Most Prestigious Board Game Awards by exploring the most well-known board game awards – and a few a bit less-known.

When checking out board game boxes you’ll often note several award icons that they like to boast with. These are the awards that a game has received at certain conventions or from communities.

As is usual in our complicated world, there is no one definitive award, but rather several. The situation can often be confusing, so this article will help you out in defining which ones you should keep an eye on.

To further confuse the matter, each award comes with several sub-categories. I will mention some, but not all of them carry the same weight. For example, Best production value award doesn’t tell you much about the gameplay quality.

So keep that in mind if you see a game sporting a bizarre category award from a community you’ve never heard about. On the other hand, having many different seals is always a good sign.

What are the most prestigious board game awards?

Spiel des Jahres is a German award, promoting family-friendly game design. It was created in 1978 and it’s one of the most respected awards in the business, although it’s slightly “skewed” in favor of family games. Notable winners include:

Kennerspiel des Jahres was introduced as a new category in 2011 and it’s aimed at more advanced board games. Notable winners:

Golden Geek Awards are nominated and selected through communities on BoardGameGeek.com, RPGGeek.com, and VideoGameGeek.com websites.

They are awarded annually at the BGG.Con held in Dallas. Since BoardGameGeek is the largest online board game community, these awards have a lot of weight behind them.

Dice Tower is another large online community, which has grown around Tom Vasel and his video reviews on Youtube. Vasel and the people around him are highly respected in the boar dgame community, and so are their Dice Tower Awards.

Jogo do Ano (Game of the Year) from SpielPortugal.org is an award that is focused on mid to heavy eurogames and it’s been awarded since 2006. Previous winners:

The Deutscher Spiele Preis is another gamers’ games award, focusing on a similar spectrum of heavier games as Jogo de Ano. It is awarded since 1990 and notable winners are:

International Gamers Award (IGA) was started in 1999 and is now a well-established and respected award amongst players, designers, and publishers.

BoardGameQuest awards are given out since 2014 by the staff of the boardgamequest.com website, a popular review blog. They have quickly gained popularity and reputation as one of the industry’s most credible.

The Golden Elephant was awarded from 2013 to 2019 by heavycardboard.com and is all about the heaviest of strategy games. Factors like depth of analysis, planning, gameplay, low luck, innovation, and enjoyment are considered.

The award was unfortunately discontinued in 2019. Winners:

As D’or (Golden Ace) is an award given out at an annual gaming festival in Cannes: Festival International des Jeux. It was established in 1988, and since 2006, several categories exist, such as Grand Public, Expert, Children’s Games, and Jury’s Prize.

UK Games Expo Awards are rewarded every year at a festival with the same name. The first year of the awards was 2007, and since then more than a dozen categories exist. Most notable are

The Origins Awards are somewhat larger-scale awards. They are for outstanding work in the game industry are presented annually by the Academy of Adventure Gaming Arts and Design.

Found the article interesting? Sign up to learn more.