Under Falling Skies has quickly gained a lot of fans in the solo board gaming community. Since the 4 scenarios-long campaign is one of the main appeals of the game, many board games are rightfully asking whether Under Falling Skies is replayable or not.

Is Under Falling Skies Replayable?

Even though there’s a campaign mode in Under Falling Skies, you don’t see all the content in one playthrough. You can play the campaign again and again, and you can also use the content from the campaign for skirmish scenarios, where only your imagination is the limit on variety.

For the 2019 Nanogame Print&Play Design Contest, Tomáš Uhlíř came up with Under Falling Skies: A 9-Card Print-and-Play Game. The game received a warm reception. It was easy to make at home, needed just a few basic components, and featured challenging, but fair and engaging tactical die placement.

Encouraged by its success, a full stand-alone game was published in 2020 by Czech Gamed Edition. It builds on the sound foundations of the P&P predecessor but features a sleek presentation and a lot more content.

But before we come back to the question in the title, let’s look at the game properly first. 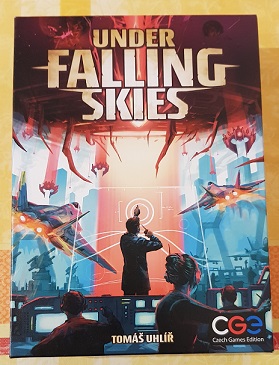 The aliens have invaded Earth. The planet is surrounded by their large motherships, which keep sending out waves of fighter ships, approaching us ever closer. Will you be able to fend off their attacks long enough so that your scientist can find a solution?

The theme, undoubtedly inspired by the classic video game Space Invaders, is expressed well in Under Falling Skies. You’re not just pushing dice and markers around, you’re fending off the alien invasion!

The mechanisms are connected to the theme, as well. You must man stations in your base to produce energy, research, and other resources, while the mother ship is getting closer and closer, inflicting damage, and increasing tension.

The presentation further adds to the high immersion. The art style draws from sci-fi B-movies and comics of the past. It’s colorful, over the top, and does not take itself too seriously.

Components look great on the table, particularly the unusual high/narrow layout, that emphasizes how the enemy is approaching the surface.

Enemy fighter ships’ shape is a direct homage to Space Invaders, but still with enough unique style. They look sharp and dangerous, although if you, like me, have big fingers with short nails, they may be difficult to handle.

Another nice touch is the screen-printed excavator, while the markers and dice are fairly standard.

Under Falling Skies is not a complicated game and is fairly easy to learn. The rulebook does a good job of teaching the phases and actions. It also has plenty of examples included.

The structure is good too. It starts with just the basics so that you can play your first skirmish game and only adds more complicated stuff later on. It finishes with explaining the campaign, so I definitely recommend you learn the game in the order it suggests.

The only thing that’s missing is the appendix with the iconography and game phases. The campaign introduces several new (minor) concepts that are explained on the scenarios sheets and it would be nice to have everything in one place.

How to Play Under Falling Skies

The idea of the game is to accumulate enough research progress before the mothership comes too close to the surface, or the fighter ships destroy your base.

You gain research points by placing your dice workers into labs. The higher the numbers on dice, the more points they generate and higher up the ladder you can climb.

Besides labs, there are other rooms you can place your dice. Fighter command rooms allow you to shoot down enemy fighters, while power rooms generate energy to fuel those processes.  Later, you will gain access to rooms that manufacture robots (extra workers that lose power each turn, but they stay placed in their rooms), command headquarters (lets you split points out to other rooms), and even dual-purpose rooms.

On top of each column, there are anti-aircraft rooms, which can slow the advance of oncoming fighters. There’s also the excavator, which allows you to expand your base and add more rooms. 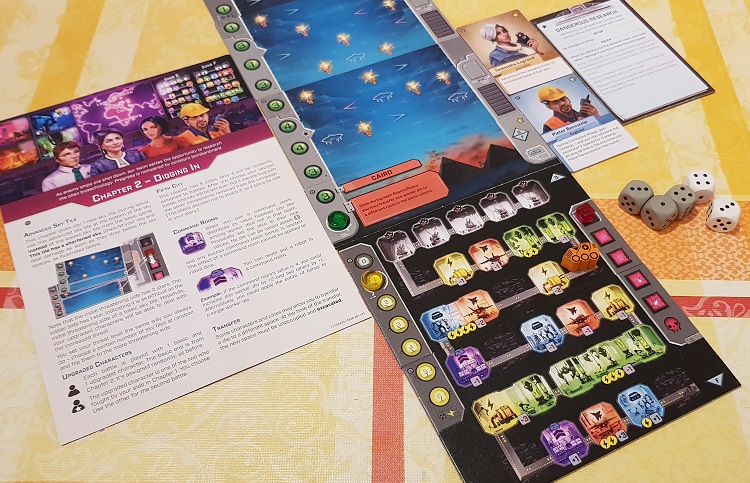 This all sounds pretty standard, so where’s the catch, you say? Well, there are (at least) three things that make the game interesting.

(1) Every time you place a die, all enemy fighters in that column move towards your base according to the value of the die. This creates a natural trade-off. Sure, higher-numbered dice will generate a lot of energy/research, but they’ll also cause damage to your base if fighters get through.

Moreover, there are certain spots in the sky where you want aliens to end (the ones where you can shoot them down), and some, where it’s not so desirable or there’s another tradeoff. If they end on the mothership icon, the mothership will come one row closer, but unlike in the mothership phase, the malus does not get activated.

(2) Dice placement is limited to one die per column.

(3) Every time a white die is placed, the remaining dice are re-rolled.

Tactical and Strategic Depth of Under Falling Skies

Therefore, calculating where to place your dice creates a deep and intriguing puzzle, one where you have to take all of the above tactical aspects into account. And the puzzle is never trivial or definite; there are multiple possibilities usually available.

That’s why you must also consider the strategic element. The game components allow for a lot of setup variability, creating significantly different scenarios. Of course, your strategic approach must be adjusted accordingly. Some will require rapid research, step-by-step research, extensive usage of robots, no robots at all, low/high HP bases, and so on.

You need to study the setting, develop a plan, and then try to stick with it. Despite some randomness of the dice roll, there’s a lot more emphasis on well-planned actions than on the Lady Fortune.

And you need to be efficient because the game is very tight and challenging. As is usual with solo-only titles, the bar is set very high and there’s not much room for error. If you’ll win a scenario, you’ll do that just barely. And that’s on lower difficulties, the higher difficulties are even more relentless. 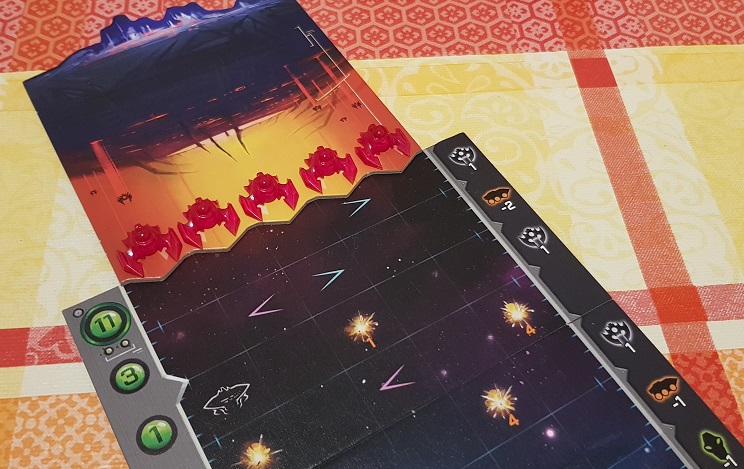 But never have I felt that the game is unfair or that it’s throwing obstacles at me just to be mean. (I.e. this happens a lot in Robinson Crusoe) Under Falling Skies, you are in control. If your base got destroyed, it’s because you allowed too many enemy fighters to come through by placing more valuable dice.

There are no random and frustrating take-that elements. Whenever I lost the game, I knew exactly why that happened and how to rectify it. And since the gameplay is usually under 30 minutes, I went straight back in and tried again.

The short playing time, combined with relatively simple, yet deep tactical choices, creates a lot of replayability. It’s almost addictive how you want to play again and again.

The custom scenario is the default way to start playing. As already mentioned, the setup allows for a lot of variability. There are several cities (base layouts) to choose from, and the difficulty is also scalable.

Moreover, as you play through the campaign, you can add even more cities, special rules, and special abilities, which allows creating custom scenarios where you’re limited only by your imagination.

The 4-scenario long campaign is the meat of the game. The scenarios are loosely linked and presented with amusing little comics.

But more importantly, they are original and diverse. Mostly, they use twists on the basic rules to create that: you must play with one less die, you’re restricted to certain rooms, etc. Combined with personnel (with special abilities), and extra cities, that’s enough to make each one of them feel special and memorable.

Moreover, you’ll have several setup options for each scenario to choose from, making the campaign highly replayable.

So, how replayable is Under Falling Skies?

As you can imagine, there’s an exceptional replay value for such a small box. Campaigns are replayable by themselves and add plenty of new material to the game, making skirmish play a sandbox full of toys.

Perhaps more importantly, the replay value comes from the gameplay itself. Developing strategies for scenarios, and then attempting to steer through danger, solving puzzles by tactically placing dice, is challenging, immersing, and satisfying.

Of course, you can’t expect the replay value to reach big box games such as Mage Knight or Spirit Island, but for the price of Under Falling Skies, you’ll get your money’s worth out of it guaranteed.

Yes, Under Falling skies is a highly replayable solo board game. It’s a small box game with a lot of content.

The presentation and gameplay are phenomenal, it’s cheap, and, as said, it is highly replayable. Frankly, I don’t have anything bad to say about it and can’t think of a single reason why every solo board gamer shouldn’t have this on her shelf.

>>>Under Falling Skies is available on Amazon<<< 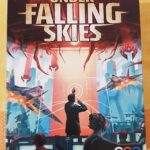