Forbidden Island is a very challenging cooperative board game, which is also easy to learn for new players. Does it have the best of both worlds? Read my Forbidden Island Game Review to find out.

Last week, I have been browsing local ads. I do it now and then, just out of curiosity. And you never know, you might get a good deal on something. So I stumbled upon a guy selling some board games not far away from me.

I ended up buying five of them, but the one I was most excited to try first, was Forbidden Island. I have heard a lot of (good) things about it, and after a couple of testing days, here is my Forbidden Island game review.

Forbidden Island is a cooperative game. You and your co-players explore an island (made out of tiles), trying to find four pieces of ancient treasure and escape with them in hand.

Island, on the other side, is trying its very best to stop you – water level keeps rising and tiles of the island will get flooded and eventually submerged. If key tiles get submerged, you lose. 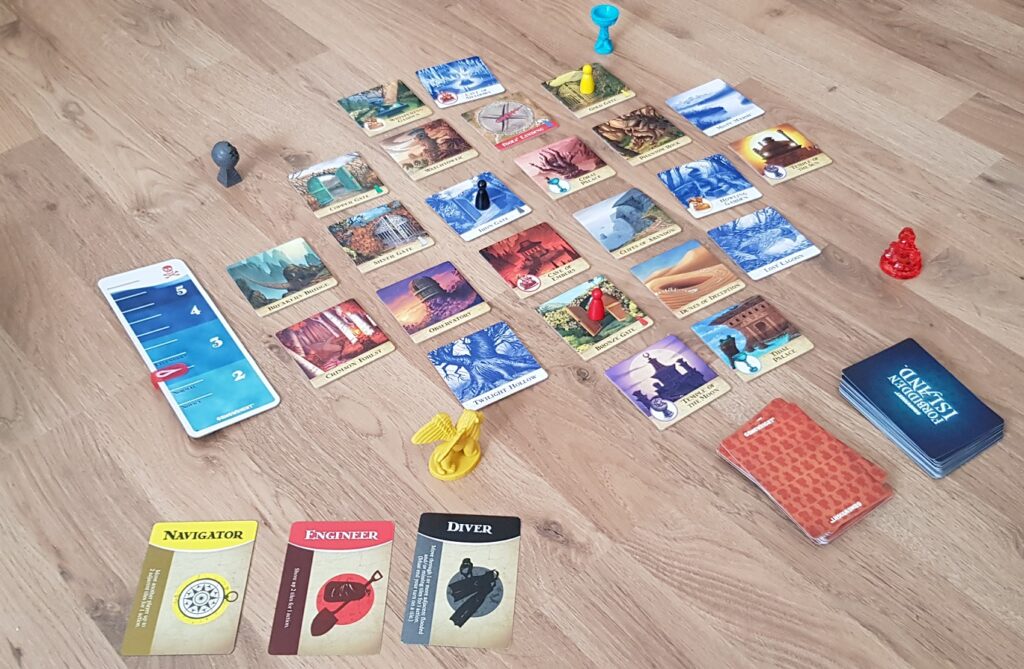 It’s very quick to set-up a game of Forbidden Island. First thing is to build an island by randomly placing 24 of the tiles in a sort of circular shape (see picture above). Then you draw (or decide) on player roles. There are six available, each with its special ability:

There are some issues with the character balance. Some (i.e. the diver) are only good in specific situations and useless for the rest of the game. Diver, in particular, seems weaker than the other characters – i.e. the pilot can do everything the diver can, plus more, and is not restricted to flooded tiles being nearby.

Still, each character plays and feels somewhat differently. How their strengths will be utilized is down to players and their cooperation.

Next, each player receives two treasure cards, and the first six tile cards are drawn and those tiles are turned face down – they are now flooded. 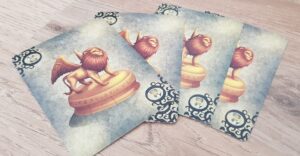 The last thing to do is to set the water level marker on the water meter scale. You have several predetermined positions which act as difficulty settings: novice, normal, elite, and legendary. Difficulty mechanics work well and affect the gameplay directly by determining how many tiles get flooded (or sunk) each turn.

How Does the Game Work?

The goal of the game is to collect all four treasures and escape the island successfully. You can collect a treasure if you have four matching treasure cards and you are located on the corresponding treasure tile. Each treasure has two corresponding tiles. Along with Fool’s Landing (helipad for your escape), these are the tiles you must look after the most. How do you do that?

Each player’s turn has three stages.

It is in the first stage, that you have the most influence over the situation. Every turn you get 3 action points. You can:

Every action costs one action point. A player can use any combination of these actions – until his action points are depleted for the turn.

The trick here is to try to shore up as many tiles in a turn (by doing a move-shore-shore, shore-move-shore, or even 3x shore), but also keeping an eye on which tiles you are shoring (remember to keep those important treasure tiles and the helipad shored) and which treasure cards you and your co-players are getting (all your cards are face-up).

Then plan together to meet and exchange treasure cards, move to collect treasures, and finally meet on Fool’s Landing and escape.

Mini drinking game for adults: take a shot every time someone says King’s Landing instead of Fool’s Landing.

Taking two treasure cards is next and you might think it’s the nicest part of the turn, when in fact it’s the most frustrating. You see, there aren’t only treasure cards in the deck. Besides two free abilities cards (Sandbag gives you one free Shore anywhere and Helicopter gives you one free move to anywhere) there are Waters Rise! cards in there.

These move the water level marker one notch higher on the meter (resulting in drawing more flood cards) and make you place the discarded flood cards back on top of the flood draw tile.

That means, that in the next stage of the turn, these cards will be drawn next and if you haven’t shored the tiles yet, one of them could be removed from the island permanently.

The game is designed so that this will happen sooner or later (depending on difficulty) so that there is always a feeling of urgency and inevitability. Both treasure card and flood card decks get recycled when they are depleted and as tiles get removed from the island, so do their corresponding cards from the deck.

This results in a snowball effect of flooding, when in the beginning you are managing to control it relatively easily, then you try to hold on only to key tiles, all the way to the point you can’t contain the flooding anymore. (You better win by then!) 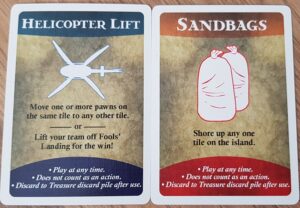 This is a great gateway game. Mechanics are pretty basic and there are not many options you have on your turn. Furthermore, since it’s a cooperative game, experienced players can help the new players during the game and teach them.

The atmosphere and tension are great, especially on a higher difficulty, when every treasure card drawing is accompanied by a prayer for the right treasure cards (and no Waters Rise! cards).

Tiles and cards are plastic-coated, which makes them a lot more durable than cardboard.

Each treasure is presented as a plastic miniature, which is a nice touch. It adds to the atmosphere but has no practical value (they could very well be just cards). Our 3yo loves to guard those treasures during the game.

The difficulty mechanic works great and it’s fascinating to see what difference it makes to move the marker by only one notch. Novice and normal are easy to beat and elite is a fair challenge. Legendary is almost impossible to beat – you need a lot of luck drawing the right cards at the right moment.

The island is made out of tiles, but they do not depict the geography of the island, but rather its landmarks (i.e. Howling Garden, Lost Lagoon). The result is that you have a hard time imagining yourself being on an island, instead of on tiles with different names. Maybe if the game would be played on the board with slots for those tiles, it would make the island feel more whole and coherent.

At the end game, when a lot of the tiles are already gone, it’s sometimes hard to see where the diver can or cannot move. This is directly connected with my previous point, and again, I think having a board below the tiles would solve this problem.

There is no hidden player-specific information. This means that you know everything your neighbor knows and vice-versa.

Although discussion and cooperation are encouraged, this means alpha players (if you’re reading this, then you’re likely an alpha player of your group) can ruin the enjoyment of a casual player by telling them what they should do and be right (because they have all the information), since there is usually an obvious way of what is the best course of action in a turn.

Is this Island Forbidden?

The bottom line is that we had a lot of fun playing Forbidden Island and my final impression is very positive. I can recommend the game, especially if you are trying to introduce new players to board gaming, as you can help them along the way. Just don’t guide them by the hand, leave them to make their own decisions.

Forbidden Desert and Forbidden Sky are sequels of Forbidden Island.